Ronaldo convinced Man United to help them come to a decision to sign the Portuguese 25 year old. Manchester United Boss Solskjaer told in a recent interview that before signing Bruno he consulted Ronaldo and asked for his recommendation.

Solskjaer: “So obviously Cristiano was an easy goal for me that I managed to get through [to ask about Bruno Fernandes]. Through Patrice Evra, I managed to get hold of Cristiano and his recommendation obviously stood him in good stead.” #mulive [high performance podcast]

Man United were struggling to find a strong play maker and then Bruno came under their radar and an unexpected scouting tip from Ronaldo  made the decision clear for them.

The 25 year old joined Manchester United from the club that made the Man United legend Chistiano Ronaldo in January and since then United have been on a 17 match unbeaten Run.

Sojskjaer said in an interview with High Performance that he had been able to get in touch with Ronaldo to get his opinions on this matter.

Solskjaer further praised Fernandes’ character and revealed: “The first day he [Bruno Fernandes] was in the club, he shook everyone’s hand – he didn’t come in here thinking ‘I’m the, I’m the big shot. You follow me’. No, he shook absolutely every staff members’ hand

Before signing the Portuguese rising star Solskjaer was on the brink of being sacked and it was clear that his team need that magic factor to let him continue be the boss at Man United. In this time of crisis Solskjaer had to find a key player who could boost the club morale and win games that United should have won. In such a time Ronaldo’s opinion on the Sporting Lisbon star, had a huge impact on Solskjaer and it was the key factor in signing of the Portuguese Rising star Bruno Fernandes.

Bruno Fernandes has indeed changed the way Man United used to play and have placed Man United back on track for the top 4 finish. His duo with Paul Pogba has been very mesmerizing, inspite of the fact that Paul Pogba had returned from a recent knee injury.

Bruno when interviewed via Sky Sports revealed that he was a fan of Cristiano Ronaldo and had always followed him.

“When Cristiano burst on to the scene here in Manchester, he spent a good chunk of his early career here and enjoyed so much success.”

“That’s why it was a dream of mine to play for Manchester United and I’m very pleased to be here because it’s a childhood dream come true.”

“I’m an ambitious player who wants success and I want to win every game in every competition we’re in.”

Bruno wanted to make his mark as a legend and in on his to do so as we speak. He is such a versatile player that he is able to draw out the maximum potential out of every one of the player on the field. His touches on the ball makes it easy for his team mates to garb the ball in a comfortable position and score one for the team.

Cristiano said “He’s fantastic, creates chances for him [for Portugal]. He can manipulate the ball, take the ball, confident.”

Fernandes is yet to lose a game as a United player, scoring eight goals and assisting seven in his 15 appearances so far. 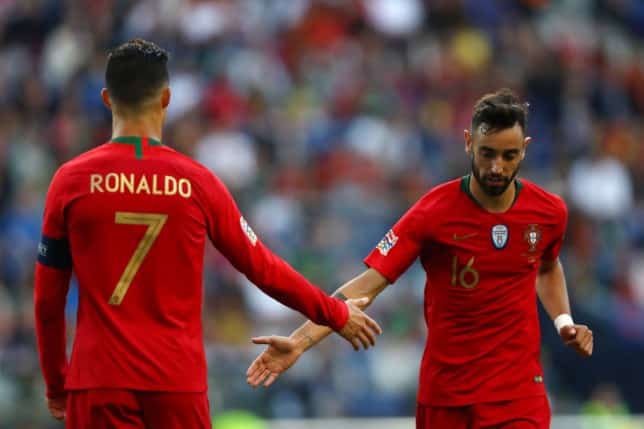