With a win against the Indiana Pacers Monday night Gregg Popovich becomes the third quickest and the ninth coach to ever reach the milestone of a 1,000 career wins.

Gregg Popovich is easily a top 5 coach ever to be in the NBA. Tim Legler of ESPN said “If there is a Mount Rushmore of coaches in the NBA, Popovich would be one of the coaches and you could argue that he was the best coach ever.”

Why is Popovich the best coach?

The Indiana native has had a stellar career when he started out with the Spurs in the 1996-97 season. Popovich has been coaching for 18 years and for the last 17 of them he has a had winning season and made the playoffs. Popovich’s first season the Spurs went 20-62 due to a ton of injuries. This ended up being a blessing in disguise because they were able to pick up Tim Duncan with the first overall pick in 1997. With David Robinson and Tim Duncan, Gregg Popovich was able to start a dynasty with the Spurs.

Popovich is the longest tenured coach in NBA history and in all major US sports leagues. This is particularly impressive in sports since now-a-days coaches can be dropped at any point in a season. So why has Popovich been able to do this? Winning.

Winning is want Popovich is all about. With a career record off 1,000-462 which is a .684 winning percentage he is just second to Phil Jackson’s .704 among all coaches with 1,000 wins. He has had 16 50-win seasons and 4 60-win seasons with the Spurs. Popovich has also added 6 finals appearances, winning 5 of those. He has won 3 Coach of the Year awards as well.

Gregg Popovich hasn’t been the most popular coach there has been though. He has been known to sit his starters from time to time and even in big televised games. But you can’t criticize him when he is still winning.

Popovich isn’t just winning games. He has created a team that is so unselfish and that play together. With having Duncan, Tony Parker, and Manu Ginobili has your core of the team has paved the way for other players to come in and succeed. He has developed those three guys as leaders. Popovich has also been able to change with the game and the youthfulness the NBA has encountered. He teaches his young players how to play the game of basketball.

With his big three players coming to an end of their season, you wonder when Popovich will end his great career as well. David Robinson commented on it in an interview on Mike and Mike Monday saying “I think for him it would probably be health wise…he enjoys having the potential of winning”

Popovich ahs also said the he isn’t a lifer like Hubie Brown. He coaches because he loves the game. But as long as Popovich is the head coach of the Spurs you will continue see them do what they have also done, which is win. 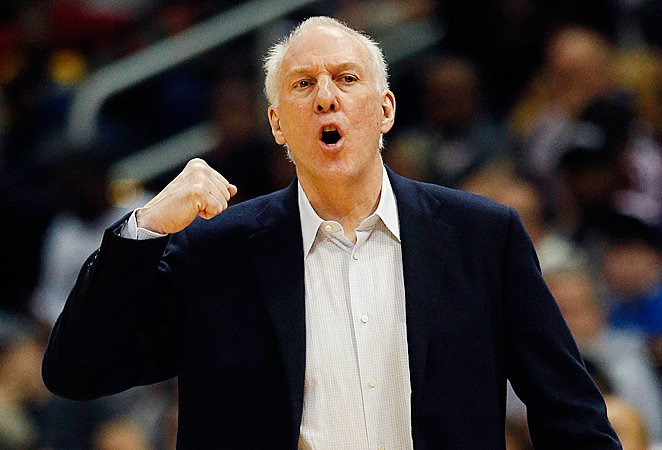