A majority of the boxing world was not much amused when undefeated Danny ‘Swift’ Garcia (30-0, 17KOs) announced his next opponent. The former unified 140-pound champion had flirted with going up in weight to the 147-pound division with having fought his last fight at a catchweight of 143 pounds against Lamont Peterson. A fight where he did get the win, but by a questionable close decision. A fight where he seemed to lose every round from the seventh onwards. This is not the only time where he has got a disputable nod from the judges. A fight on the 15th March 2014 against Mauricio Herrera saw Garcia getting out-boxed for the majority of the fight. Herrera landed more punches and connected at a higher percentage according to CompuBox.

Herrera landed 221 of 695 punches (32 percent) while Garcia connected on 204 of 675 (30 percent). But yet again, the undefeated fighter got the decision. The point is that Danny Garcia can be out-boxed. He is a solid fighter in every department with a devastating left hook, but really struggles against fighters who can hit and move. He is not the most mobile on his feet and gets confused against slick fighters who are quick on their feet. But he does have a stunning knockout victory over Britain’s Amir Khan and an impressive points win against hard hitting Lucas Matthysse on his resume.

When he announced that his next opponent would be Paulie ‘Magic Man’ Malignaggi (33-6, 7KOs) on 1st August 2015, eyebrows were raised about the choice and it seems that he is taking an ‘easy touch.’ With Malignaggi known as not having much pop to his punch and coming off a crushing knockout defeat in the hands of Shawn Porter in his last outing, it is easy to see why a lot of observers think this will be a walk in the park for Garcia. But one of the most used clichés in boxing ‘styles makes fight’ definitely applies to this matchup. At 34 years old and heading towards the twilight of his boxing career, the man from Brooklyn knows this will be one of his last opportunities on the big stage.

Malignaggi is a former two-time world champion in two different weight divisions: light welterweight (140 pounds) and welterweight (147 pounds). A guy who is considered a light puncher has had to master his boxing skills to win a majority of his fights, as he has only stopped 7 opponents in his 33 victories. Some see that as a weak point, but to win 26 from 33 fights by outboxing his opponents to win is impressive. In his prime, he is a very slick fighter with an impressive jab, good speed, good movement and good footwork. All of these attributes are a nightmare for someone like Danny Garcia. The problem is Malignaggi is no longer in his prime, whilst Danny Garcia probably is. But if Malignaggi can keep Danny Garcia out of range and can move around the ring for the full twelve rounds, he has the style to give Garcia his first loss. 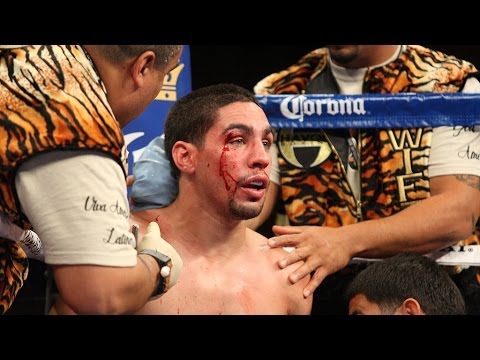