After reducing the West Indies to 127-4, Nkrumah Bonner and Jason Holder frustrate England by cutting the first innings deficit to 109.

After Johnny Bairstow’s magnificent century on Day One, England was looking to kick things on, when they started Day two 268/6. with Yorkshireman not out on 109 and Chris Woakes unbeaten on 24.

Unfortunately, Jayden Seales had other ideas, particularly when Woakes was caught behind by Josh Da Silva for 28, at 285-7.

Craig Overton became Seales’s fourth scalp at 285-8 when he gloved a steeped bouncer to Nkrumar Bonner for a two-ball duck.

Mark Wood did not last long either as he skied a pull shot straight to Permaul at the point.

And England’s innings ended at 311 All out, with Bairstow holding out to Holder of Joseph for a magnificent 140. This was also the first time England had posted a total of over 300 in 13 innings.

Brathwaite and Campbell got off to a good start with West Indies 44-0 at Lunch.

The duo continued to frustrate England by piling on the runs after lunch.

That was until the Left-hander was caught down the leg side by Foakes of Overton 35, at 83-1

The Captain then reached 50.

Before he spooned one to Overton off Wood, leaving West Indies 102-2.

Brooks followed soon after, attempting an ambitious drive of Stokes. Root took a sharp catch at slip, with the score 111-3.

Foakes dropped a sharp chance from Blackwood off Wood.

But it did not cost much as the Jamaican right-hander got an inside edge onto his pads. The ball ballooned straight to Overton at third slip, giving Woakes his first wicket. 127-4, Blackwood out for 11.

Tea was taken at the fall of that wicket.

Jason Holder and Kyle Bonner steadied the ship for the hosts after Tea.

But it did not last long as play was underway in seconds.

Bonner and Holder began to feel comfortable in the middle, but England kept control of stemming the runs.

The rain stopped play yet again with West Indies 167-4.

Bonner and Holder steadied the ship after the break. and runs started to flow from one end.

The rain ended the second day’s play with West Indies 202-4.

A vital partnership between Bonner and Holder has kept the Windies in the contest. England toiled hard, but they could not get the breakthrough. The hosts now trail England by 108 runs, and Root and the England bowlers have a lot of work to do on day 3.

So an indifferent day for England getting bowled out early and then losing control with the new ball, but they came back strongly in the middle and the last session.

The first session of Day 3 will be crucial as England will need early wickets to get back in the game, As for the hosts, they will be hoping that Bonner and Holder can build on their partnership and hopefully get a first-innings lead.

Join us for Day 3 on World in Sport. 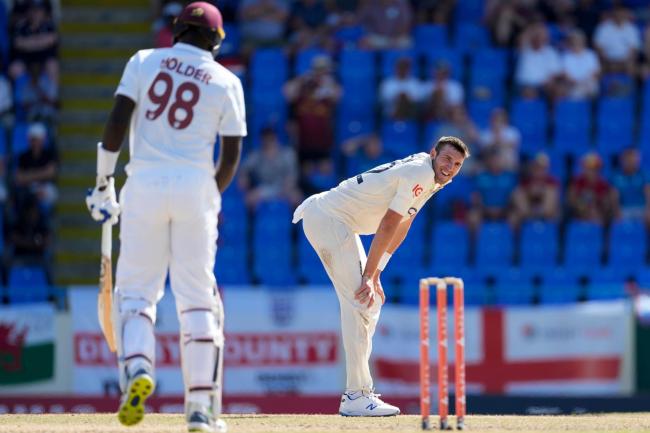