WWE RAW Women’s champion Ronda Rousey became something this past Monday that we’ve all been waiting for: Herself.

Yes, herself. Ever since she entered the WWE Universe she’s been a packaged deal. Everyone was trying to sell her to the crowd. She’s worked with literally the entire Womens Division as a group and individually. Nothing was working. That all changed when “The Man” Becky Lynch came around. You know, you never can guess how impactful an event can be until you’re on the other side. Last year’s Smackdown invasion of Monday Night RAW pushed Rousey from the front to the back. Lynch had the support of the entire WWE Universe. The invasion showed it.

Fast forward a few months later and we’re here: A Champion who drops her belt and walks away, goes Kayfabe on Twitter, and returns with a much-needed realistic swagger. There was only one word that came to mind: FINALLY. Finally Rousey was in her own skin, speaking her way, moving her way, punching her way. The spots didn’t look waited on, and Flair and Lynch sold everything. It was like the light bulb came on, or WWE writers decided to throw everything out the window and let Ronda be Ronda. Whatever they did, it worked.

It was climatic. Stephanie McMahon was conducting a contract signing between Lynch and Charlotte Flair for what everyone thought was a vacant Women’s Title. It was going to be the WWE Fastlane main event for sure. The Quicken Loans Arena in Cleveland, Ohio would have come unhinged. How did this happen? Well, McMahon also announced they had dropped the charges against Lynch along with her 60-day suspension (things are moving strangely fast if you were wondering…). The camera cut backstage and here comes Rousey, awkward walk and all. She comes out ringside, says a few words, and then went on the attack, focusing primarily on Lynch. What I found interesting was how she blasted the crowd for booing her, though she felt she put in the work every week to get better. She was saying everything we were thinking about her, and took fans to task:

“I did everything I could, everything I could to respect this business. I worked my a– off, and I exceeded every expectation. I poured my heart out, and sacrificed my body for your entertainment and what did you did huh? You boo’ed me out of the Staples Center in Los Angeles, my home! You cheer for Becky when I’m out here working my a– off to entertain you. You know what? No. I’m done pretending. I am no longer here to entertain you. I would break Becky and Charlotte’s noses as so much as sneeze in their direction and you know it.No! I’m not your dancing monkey! Not any more! Damn your fantasies, damn The Man, screw the Woo, and no more Mrs. Nice B–ch!”

The depth of the Champion was not only solid, but very independent. There was no play to the crowd, no smiles down the ramp. It was Rousey. She had arrived, and all hell was about to break loose.

This wasn’t the “Rowdy” Ronda Rousey we had been made to deal with each week. No, this was UFC Ronda Rousey. UFC Ronda is vicious, cares less about what you think, and would make your shadow hide its arms. In the end, Lynch was left on the mat with Rousey’s foot on her face. The work over was pristine. It was almost too real. You want to believe there were not personal feelings based off the Twitter exchange this past week, but we all know that beatdown was due.

Ronda Rousey’s exit from the WWE after WrestleMania (as it’s been reported) will be a good exit, and sets up a crazy return. Monday night’s performance made her presence in the WWE all worth the investment. 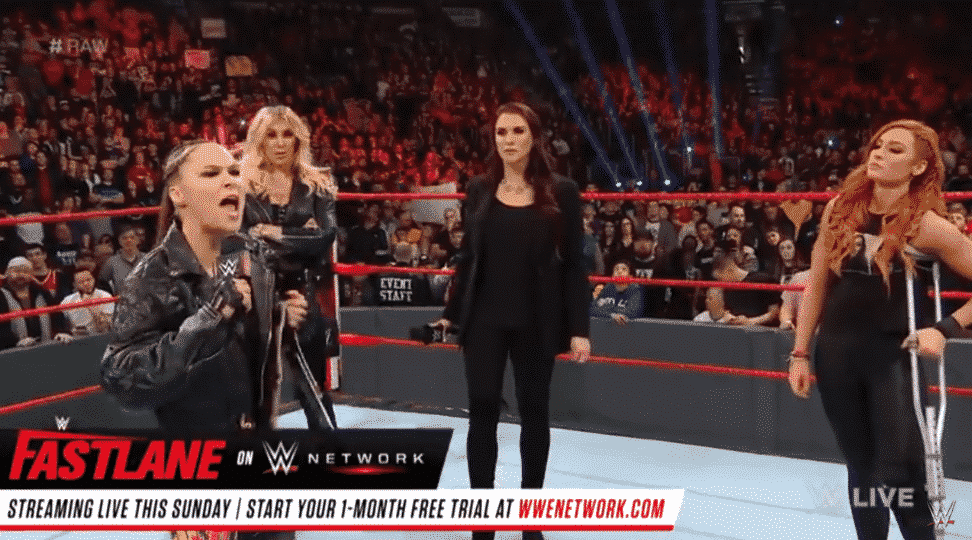