Due to the racism and unethical laws of the South African government in the early 1980s, South Africa was banned from participating in the 1987 & 1991 Rugby World Cups. The impact hurt fellow Springboks, as being excluded from the grandest stage in the sport made the rugby rich nation unable to compare against the best rugby union sides globally.

After the abollishment of the apartheid government, in 1992 South Africa was readmitted to international rugby and shortly after, were announced to be the host nation of the 1995 Rugby World Cup.

In 1994, South Africa had its very first democratic election which saw a drastic change; a new government was elected and Nelson Mandela was sworn in as the first black president of the brand-new rainbow nation. Nelson Mandela, known for his influential humanitarian beliefs was a huge rugby fan. Even when The Springboks seemed unequipped to challenge the top tier rugby nations, Mandela believed The Springboks could do the unthinkable and win the 1995 Rugby World Cup.

Before the start of the biggest event due to take place in South Africa, President Mandela invited Springbok Captain, Francois Pienaar to his presidential offices for tea. The two shared light on various topics, however, the main reason for their iconic sit down was Mandela’s optimism to see South Africa win the 1995 Rugby World Cup.

The Birth of The All Black 1995 Rugby World Cup Superstar:

For most parts of the 16-team 1995 Rugby World Cup Tournament, the clear favourites were inaugural 1987 Rugby World Cup Winners, New Zealand who dominated their road to the final. Coach, Laurie Mains and Captain, Sean Fitzpatrick led a formidable force, with a squad full of depth; while the most feared rugby player at the time became a household name globally. At a young age of 20 years old, weighing in at 119KG, All Blacks left-wing, Jonah Lomu. Leading up to the final, Lomu scored a record 7 tries in the 1995 Rugby World Cup tournament. His ecstatic pace and superior power made the physical sport seem like child’s play as he ran over every opponent en route to the try-line.

His standout performance of the tournament was his Man of the Match display in the semi-finals against England, as he scored 4 tries and famously ran over Mike Catt on the way to scoring. Jonah Lomu was the leading try-scorer in the 1995 Rugby World Cup and looked to play a key part in New Zealand winning the final at Ellis Park.

The 1995 Rugby World Cup Final turned out to be one of the closest and most physical RWC Finals ever witnessed. New Zealand went into the fixture as standout favourites, although many experts expressed how long The Springboks were able to withstand the dominance of the All Black attack. Plenty of emphases was placed on the New Zealand superstar, Jonah Lomu, as South Africa refused to give the talented wing any space out wide.

As both sides displayed water-tight defence on the day, it was a match determined by the consolation of infringements and the kicking boots of Andrew Mehrtens and Joel Stransky. At the end of regulation time, the scores were tied at 9 points each. For the first time, a Rugby World Cup was due to head to extra-time where the 1995 Rugby World Cup winner would be determined after the additional minutes.

New Zealand took the lead in extra-time from a converted penalty by Mehrtens and shortly after, South Africa levelled matters as Stransky converted a successful penalty. With less than 7 minutes to play, a moment of brilliance happened; a moment that would change the course of history for South African Rugby forever. Off the back of a successful scrum, fly-half, Joel Stransky struck a perfectly executed drop goal to put South Africa in the lead. In what was the iconic moment of the 1995 Rugby World Cup Final, became the exact moment the newly democratic nation embraced their first international sports success.

Following the triumph of the 1995 Rugby World Cup Final, the birth of the brand new united rugby team was born: The Springboks. The first black president of South Africa was embraced by his former oppressors and what was formally only seen as the sport for white South African’s, became accepted by every eager rugby household.

The 1995 Rugby World Cup Final will always be remembered as one of the greatest sporting moments in history. Many South African citizens still believe the World Cup triumph played a huge part in nation-building of the new democratic nation. The ultimate underdog success story uplifts many rugby fans to this day, and the beauty of the victory became a uniting force to many South African’s in the game of rugby.

On the 24th of June, The 1995 Rugby World Cup Final, President Nelson Mandela wore the colours of The Springboks and handed over the William Webb Ellis trophy to South African Captain, Francois Pienaar. At that moment, all of the previous oppression by the sport in South Africa ended and a brand new national side was born. The high standard of The Springboks was set and plenty of success stories followed from South African Rugby thereafter.

Did the 1995 Rugby World Cup Final play a huge part in uniting the newly democratic Republic of South Africa?

Was President Nelson Mandela the driving force to witnessing the Springboks success?

Let me know your thoughts in the comments below. For the best sports stories and news, follow @WorldInSport 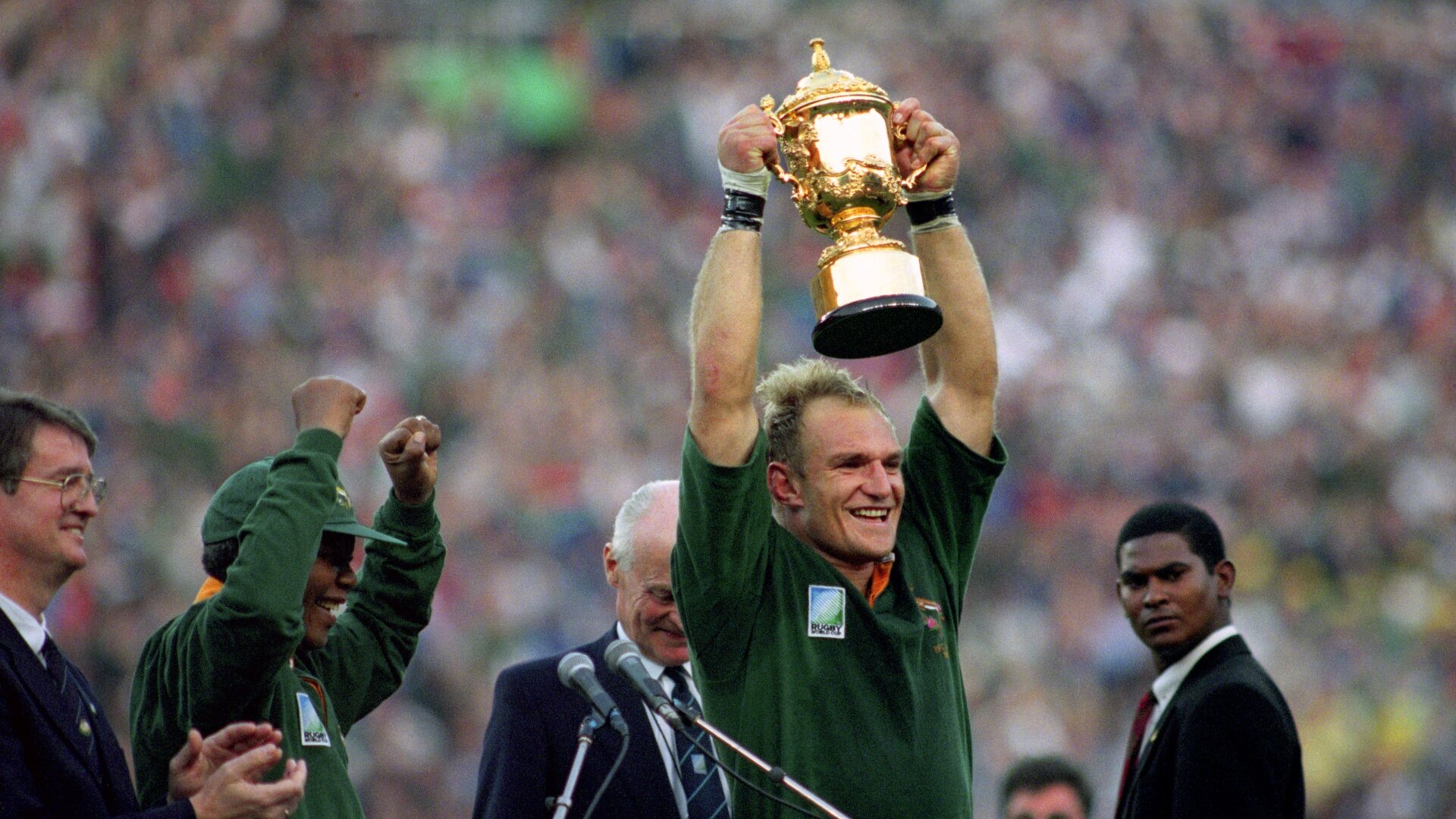