Now that the NBA season has ended and a new champion is crowned, the sports world shifts its focus to Tokyo for the Olympic Games. 12 teams have qualified through international tournaments, including the 2019 FIBA World Cup for the right to play for the gold medal. While the country still battles with a spike in covid cases, there are still some doubts that the Olympics themselves could be canceled for a second time.

Here’s a look at the players to keep an eye on during the basketball tournament of the Olympic games.

Iran: Hamed Haddadi
Hamed Haddadi is a name that few basketball fans may or may not remember. Haddadi was the first Iranian to play in the NBA, playing for the Memphis Grizzlies and the Phoenix Suns. Currently, Haddadi plays Sichuan Blue Whales of the Chinese Basketball Association, where he was CBA Finals MVP in 2016.

Haddadi serves as Iran’s captain, having led them to three FIBA Asia Cup victories in 2007, 2009, and 2013, a silver medal placing in 2017, and a bronze medal placing in 2015. He averaged 14.6 points and 10.8 rebounds per game during the 2019 FIBA World Cup. Haddadi may not play in the NBA anymore, but he could make some impression on a few talent scouts looking for a big.


France: Rudy Gobert
France is one of the powerhouse teams in the field of 12, especially with a history of giving the NBA such talents as Tony Parker, Mickaël Piétrus, and Boris Diaw. It was hard to choose which players from France would be the best ones to watch, but based on their performance throughout the season and their stats, Rudy Gobert gets the nod. Gobert was a force for the Utah Jazz this season, averaging 14.3 points and 13.5 rebounds per game. During the 2019 World Cup, Gobert averaged 10.1 points and 9.0 rebounds.

Gobert has been playing like a man on a mission and will have to do so if he wants to bring a gold medal to France.


USA: Bam Adebayo
Much like France, the USA are a powerhouse team in the field of 12. Unlike the French, the U.S. has a storied history of winning big at the Olympic games, dating back to the Dream Team of the 1992 Barcelona games. With the assembled roster for this year’s USA team, it was a tough choice to choose which player would be the one to watch.

Bam Adebayo will be the one to watch. Out of the many players for team USA, some of whom are making their Olympics debut, Adebayo will be the most intriguing. Adebayo missed out on making the roster for Team USA for the FIBA World Cup, which left him with much to prove, doing so in grand fashion in the NBA Bubble, garnering the attention of coach Gregg Popovich.

Though Adebayo’s Miami Heat squad was swept by the eventual champion Milwaukee Bucks, playing in the Olympics will give Adebayo a much-needed chance to prove just how efficient he really is on the court.

Satoransky, currently playing for the Chicago Bulls, can use the Olympics as a bit of a learning experience. He averaged 7.7 points and 4.7 assists per game, a pale comparison from his EuroLeague days when he played for FC Barcelona Basquet, where he averaged 8.1 points and 3.4 assists. Satoransky will no doubt have his hands full with guiding the Czech Republic out of their group, but raising the level of his game should be a priority.


Australia: Patty Mills
Australia, much like France and the USA, boasts a number of talents they have produced over the years, from Luc Longley to Matthew Dellavedova. The Aussies recently defeated the US in a 91 to 83 contest, led by San Antonio Spurs guard Patty Mills.

Mills has played internationally for Australia since 2007, leading them to several Oceanic championships, albeit against New Zealand. Along with becoming an NBA Champion in 2014, Mills’ championship expertise and leadership role will come in handy for the Aussies, especially with his three-point shooting and playmaking ability.


Germany: Moritz Wagner
Germany, the nation responsible for gracing the basketball world with the talents of Dirk Nowitzki, will be represented in the basketball tournament in Tokyo. While Germany may have a young core of talented players, they will have to develop and learn during this tournament. One such player to look at is Moritz Wagner.

Currently with the Orlando Magic, Wagner looks to be the captain of the German basketball team. He averaged 11.0 points and 4.9 rebounds for the Magic. For this young German team, playing in the basketball tournament will be a learning experience, but for Wagner, it will help him in building a potential star for Orlando.


Italy: Nico Mannion
The Italian team have a group of players with some upside like Danilo Gallinari and promising potential like Nicolò Melli, however, there is one player that can make an impression on the court. Nico Mannion, who currently plays for the Golden State Warriors, has the skills and the confidence to be a three-point threat for Italy.

Mannion will be the one to watch for Italy, aside from Gallinari. He will come up big for them from beyond the arc, but his defense will be much desired should Italy look to make it further in the field of 12.

Nigeria: Precious Achiuwa
Nigeria, the only African team in the field of 12 that pulled off a major upset in an exhibition against the USA, has talent that are looking to prove their might on the court and looking to pull off more major upsets. Like the majority of the teams in this tournament, Nigeria has young talent to keep an eye on, but more specifically, Precious Achiuwa.

Achiuwa’s rookie season with the Miami Heat left much to be desired, especially when he could’ve been inserted into a lineup and learning with Adebayo and Jimmy Butler. Though he didn’t have an NBA Summer League where he could refine his skills, playing in the Olympics will help him become a better player. If Achiuwa can bring the same tenacity as he did when he blocked Kevin Durant’s dunk, then Nigeria will be a force to be reckoned with on the defensive end.

Argentina: Facundo Campazzo
Argentina shocked the world when they took home the gold back in 2004, led by Luis Scola and NBA Champion Manu Ginobili. Fast forward to now and the Argentines are still looking to repeat that same success. Although Scola will lead the team, it’s Facundo Campazzo that many should pay close attention to.

There are some out there that are comparing Campazzo to Ginobili, but that’s only because they see Campazzo as an heir apparent. Campazzo will surely have big shoes to fill and Argentina will truly need a player that looks to escape the shadow of his predecessor.


Japan: Rui Hachimura
The host nation of Japan looks to leave more than an impression on the basketball world. In the past, Japanese players such as Yuta Tabuse made their way to the NBA, but now there is further representation in Yuta Watanabe and Rui Hachimura, who look to guide more Japanese basketball players into the NBA and making basketball a big sport.

Hachimura’s career in the NBA still has a lot of room to grow, but serving as captain for Japan will help elevate his game. He averaged 13.8 points per game this season and in the play-in tournament, he averaged 14.8 points. Look for Hachimura to have a breakout tournament, which will evolve into an upcoming breakout season that could lead to being an all-star and contending for the Most Improved Player award.


Spain: Pau Gasol
Spain is the undisputed powerhouse in European basketball, boasting such stars as Victor Claver, Ricky Rubio, Juan Hernangomez, Sergio Rodriguez, and especially the Gasol Brothers. While on the subject of the Gasols, both Pau and Marc could’ve been labeled as the ones to watch, Pau will be the more obvious choice.

Pau has led Spain in many Olympic games, dating back to 2004 and bringing the team to prominence thereafter. In addition to leading Spain to a FIBA World Cup victory in 2006 and three EuroBasket championships, Pau’s leadership is effective. Currently playing for FC Barcelona Basquet, Pau still continues to play at a high level.


Slovenia: Luka Dončić
Rounding out the field of 12, Slovenia makes their Olympic basketball debut and in a major way. Led by Luka Dončić, Slovenia have a superstar capable of putting up triple-double performances on a consistent basis. However, the rest of the team will have to do heavy lifting to help their captain.

Slovenia’s recent tournament championship was back in 2017 when they won the Eurobasket tournament. Since then, Slovenia has seen the success of not just Dončić, but also those of Goran and Zoran Dragić. Slovenia’s ascent to the world stage in basketball is just the beginning of perhaps becoming the next European powerhouse like Spain, France, and Lithuania.

The Olympic games start tomorrow at 7:30pm on NBC, but the group stage of the basketball tournament begins on Saturday at 9pm when Iran faces Czech Republic. 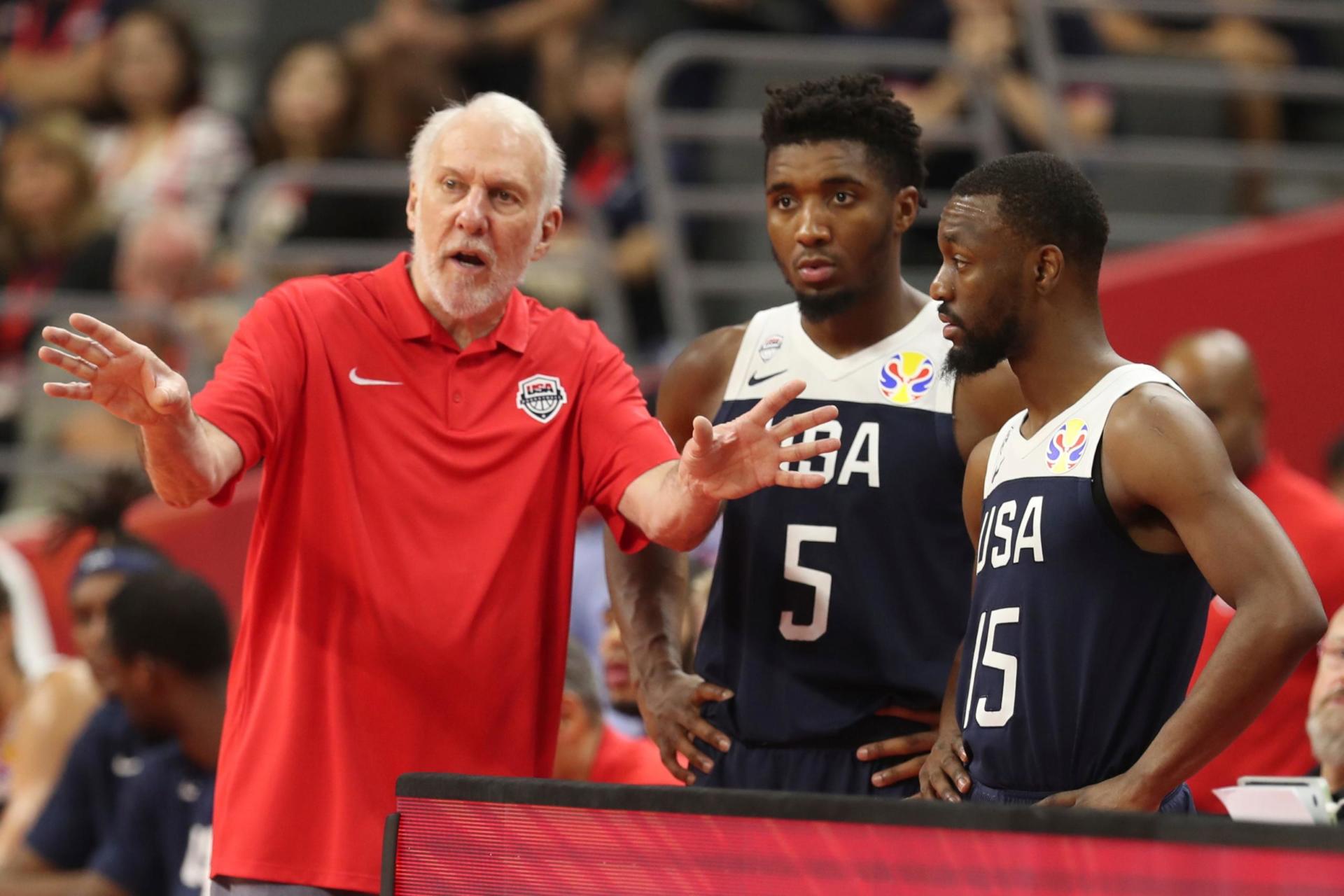 Hagler v Hearns – 7 minutes 52 seconds of war that produced the fight of the 80s and an all-time boxing classic 5.7K Views