As Mercedes’ dominance looks to be under threat for the first time in seven seasons, it brings F1 fans the nail-biting excitement they’ve been waiting for.

Cast your mind back to 2015 – Lewis Hamilton clinched his third Formula 1 world championship with three races to go at the United States Grand Prix. That same year, 17-year-old Max Verstappen was in his rookie season with Red Bull Racing.

Fast forward to today and Lewis Hamilton has won four out of the last five championships – only losing out in 2016 to his then-teammate Nico Rosberg. With a total of seven titles – joint top with F1 legend Michael Schumacher – he’s undoubtedly one of the greatest and most successful drivers in Formula 1.

But in that time, a fiery and exuberant Max Verstappen has managed 14 race wins and 49 podium finishes. Now, with seven years of racing experience under his belt and years of chasing Mercedes and Hamilton, he’s put himself and Red Bull firmly in the drivers’ seat for the 2021 title race.

A sport that combines man and machine brings a set of unique challenges. Mercedes’ car has been second to none in the hybrid era, with a flawless power unit that’s kept the Silver Arrows out of sight. And it’s allowed them to focus on a chassis that, tied together with that engine, has created an impeccable race car. This year though, they’re lacking race pace.

Red Bull, on the other hand, have had their fair share of mechanical troubles over the years. Struggles with both engine and chassis have kept them in the shadow of the Silver Arrows. Now though, their engine provider Honda have come good. And with both a solid chassis and engine that gives them power and pace, Red Bull’s RB16B is fit to fight against Mercedes’ W12.

Now, it’s down to the battle between the drivers.

Max Verstappen is fearless – on and off the track. He wears his heart on his sleeve and never backs down. He approaches the track with nerves of steel. Even a seven-time world champion isn’t enough to faze the daring Dutchman. He’s been tipped for a title since he entered the paddock and his maturity behind the wheel coupled with incredible race day performances make Verstappen Merc’s number one threat.

But make no mistake, the F1 pedigree that is Lewis Hamilton is still racing at the top of his game. For almost a decade he’s stolen the show – and he’s showing no signs of putting his foot on the brake. He has years of experience to draw from and besides being one of the fastest on the grid, he’s arguably the best when it comes to managing his car out on the track, too. F1 fans love him and so does his team. Mercedes have shown their continued trust in their number one driver by extending his contract for a further two years.

Mercedes and Red Bull have it all to drive for

As it stands, Verstappen sits 32 points clear of Hamilton with five Grand Prix wins compared to the Briton’s three. And with Verstappen’s latest win in Austria, anything less than a podium for Hamilton at the next race will see the pressure pile on at Merc.

But F1 drivers and fans alike know that it’s a marathon, not a sprint. And there are still 14 races to go, including Hamilton’s home race at Silverstone. It’s the tightest season we’ve seen in years. Hamilton v Verstappen, Christian Horner v Toto Wolff, Red Bull v Mercedes – however, you look at it, you won’t want to miss it.

As Lewis Hamilton hunts down a record-breaking eighth world championship, Max Verstappen is driving for his first. Come lights out at the British Grand Prix in two weeks, all eyes will be on the Merc driver. With seven wins at Silverstone, he’s the most successful driver at the venue. And it’s a track where Verstappen is yet to cross the chequered flag in the first place. With history on Hamilton’s side and fans back in the stands, it’s Hamilton’s best chance to close the gap in the title race. 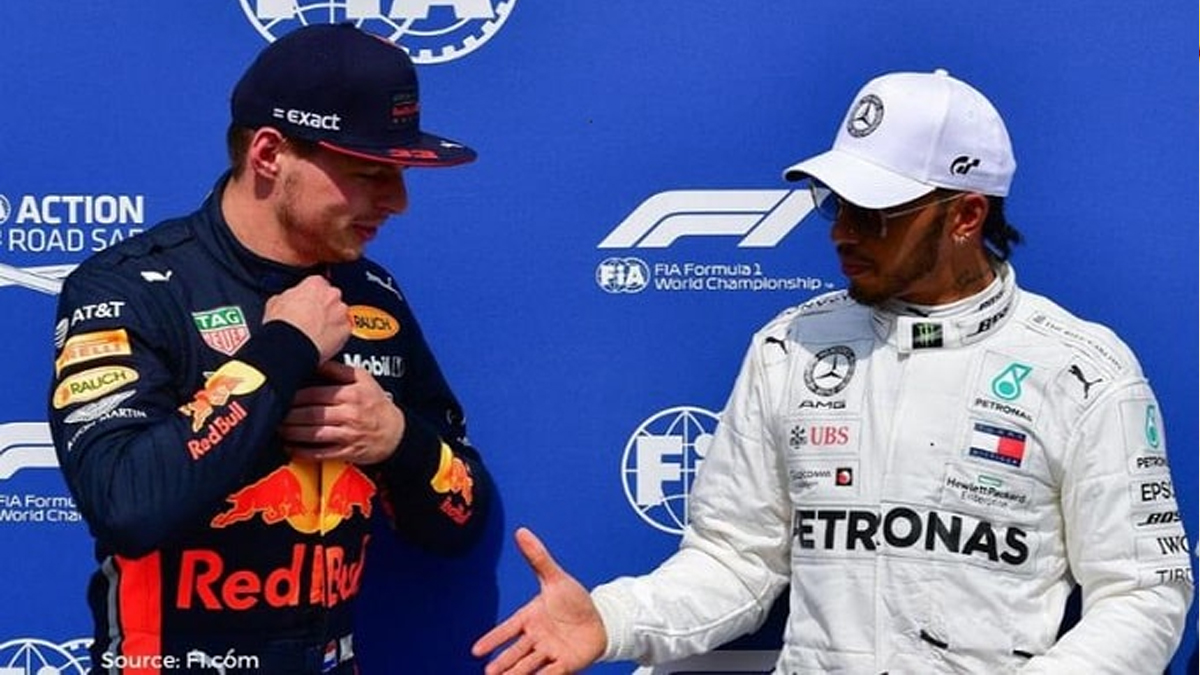