After yet another unique basketball season, we have finally come to the postseason. The 2021 NBA Western Conference Playoffs may have already begun, but we’re still in the feeling out process. 16 teams look to stake their claim into hoisting the Larry O’Brien trophy, but which team will make it has yet to be seen. Here’s a look into the always ultra-competitive Western Conference first-round playoffs.

The Memphis Grizzlies must be feeling really good about themselves right now. Not only have they defeated Stephen Curry and the Golden State Warriors for the eighth seed in the play-in tournament, but they also pulled off a big upset over the number one seeded Utah Jazz. Led by Ja Morant, the Grizzlies and their young core look to pull off a major upset over Utah, that is if Donovan Mitchell can return to the floor.

Mitchell currently sits out with an ankle injury, but once he returns for Utah, expect the series to be a lot more competitive.

Memphis looks to do that again if they can. Utah swept the regular-season series over Memphis, but that was then and this is now.
Prediction: Either team in six games.

Last season in the NBA Bubble, the Los Angeles Clippers were the number two seed in the Western Conference Playoffs and won in six games over the seventh-seeded Dallas Mavericks. Jump to now, and both teams face each other once again in the first round. Paul George and Kawhi Leonard lead the Clippers against a very hungry Luka Doncic and a Mavs team that looks to undo the problems they faced from last season.

Despite a highly memorable game that included Kawhi delivering a poster jam on Maxi Kleber, the Mavericks came away with a victory. The main highlight of the series will be if Kawhi’s defense is enough to contain Luka’s offense.

Much like the Heat-Bucks series in the East, this playoffs matchup should bring a lot of intrigue, drama, and edge of your seat moments. Dallas won the regular-season series over the Clippers, but that matters not to the Mavs, who look to make this more than a series.
Prediction: Either team in seven games.

The Denver Nuggets were the surprise team of last season’s playoffs when they battled their way through a pair of seven-game series against the Utah Jazz and the Los Angeles Clippers in the first and second round respectively. Now, they’re a top team heading into this year’s playoffs, but it won’t be a cakewalk of sorts.

The Portland Trail Blazers are the underdog team that always gives their opponents are a hard time on the court, which is no surprise from the stellar game of Damian Lillard and C.J. McCollum. Last night’s game proved that even if you’re the favorite, the underdog with a lot of fight has something to say.

Portland came into Game 1 with a direct punch to the mouth of the Nuggets in their 123-109 victory. The Blazers play with a chip on their shoulder and that’s enough motivation for them to play through the playoffs. Denver, on the other hand, looks to get even and more.

Denver won the regular-season series, but they will have to play like it.
Prediction: Either team in six games.

The Phoenix Suns were the only team to go undefeated in the NBA Bubble and failed to make the playoffs. This season, things are much different as the Suns rose to the top of the Western Conference, a stark contrast to their first-round opponents and defending NBA Champion Los Angeles Lakers, who had to partake in the play-in.

Yesterday’s game was physical and brutal, as there were moments when Chris Paul and LeBron James appeared to be injured, followed by a near-brawl between both teams.

This is no doubt playoff basketball at its highest and most intense, but one question remains the same? Can the Lakers repeat as champion? That is certainly on the minds of basketball fans. The matchup between the Suns and the Lakers will be must-watch basketball, given how a marquee matchup between Devin Booker and CP3 taking on LeBron and Anthony Davis sound.

After the drama that unfolded in Game 1, the Lakers and Suns look up the ante. The Suns won the regular-season series over the Lakers, but could be an indication of an upset looming? That remains to be seen.
Prediction: A six or seven-game series.

The Western Conference Playoffs look to bring all the drama and moments that will have people talking.  The NBA Playoffs continue as the competition looks to heat up. You can watch the games on TNT, ESPN, and ABC. 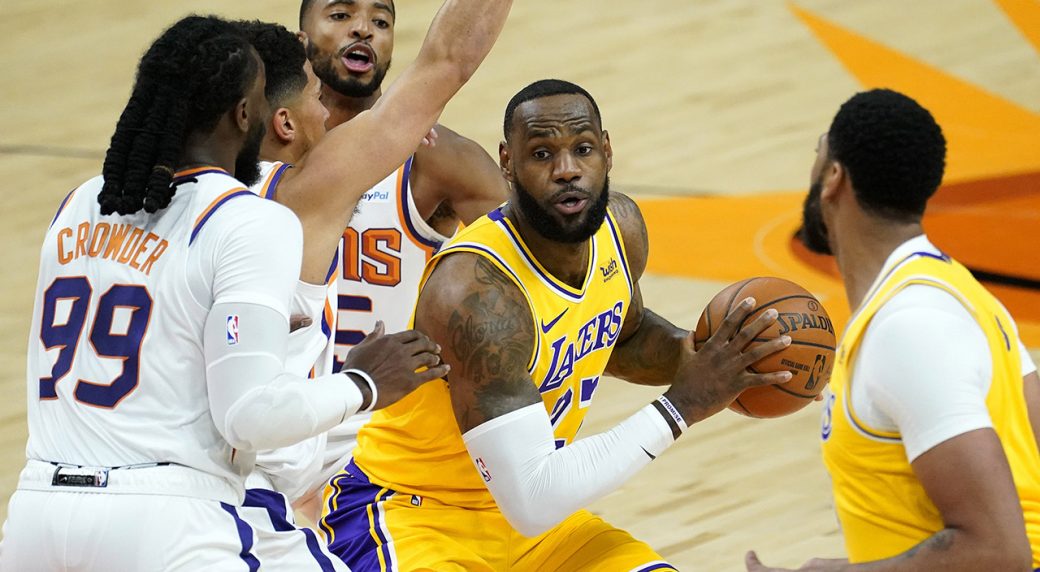