Frank Warren and Queensberry promotions bring us a mouth-watering show at Manchester’s AO arena with a heavyweight match-up between Joe Joyce of Great Britain and Joseph Parker of New Zealand as the main event.

Two top ten ranked heavyweights with all governing bodies mean this is a world-class heavyweight match-up and the best we can get outside of what we’ve seen in the last few years with Tyson Fury vs Deontay Wilder and Anthony Joshua vs Oleksandr Usyk. This is a genuine 50-50 match-up.

The adopted Morecambe bay man is trained by Andy Lee and has been regularly posting training and trash-talking clips with Tyson Fury in the build-up to Saturday. Parker says his style and mentality have completely changed for the better as he looks to use his vast experience over Joyce to get the win.

‘The Juggernaut’ Joyce stopped Christian Hammer in July in just four rounds and wants to prove he is a top 5 heavyweight with a win over the New Zealander which would be the best win on his CV ahead of stopping Daniel Dubois in round 10 of their 2020 bout due to an eye injury.

The undercard sees women boxing icon and current WBO, WBC and IBO featherweight champion of the world Amanda Serrano in her first outing since moving up in weight to challenge Katie Taylor at Madison Square Garden, New York in April this year for the Irishwoman’s four titles and the undisputed lightweight status.

The 33-year-old Puerto Rican lost a split decision over ten rounds in what was a pivotal moment for the women’s branch of the sport. The blockbuster fight is sure to be a contender for fight of the year come December time. If you haven’t watched it then I suggest you do so, it is proof that women provide just as much entertainment as men.

She now returns against unbeaten Danish IBF champion Sarah Mahfoud. She is currently ranked as the best active featherweight by the ring magazine. Her record consists of 11 victories with 3 stoppages and 8 by way of decision.

By no means is this an easy return for Serrano as both boxers look to unify their titles. Sarah Mahfoud brings with her good technical ability with quick hands and has been 10 rounds three times and 8 rounds twice already, that might not be a patch on Amanda’s record but she knows how to go the distance and will want to seize her opportunity to shock the world.

Unbeaten Nathan Heaney 15-0 from Stoke-on-Trent faces Jack Flatley 19-2-1 of Bolton in an intriguing 50-50 match up. ‘Quiet Storm’  came up short when he faced Kerman Lejarraga last year, he has boxed twice since through manager Steve Wood’s VIP small hall shows and is now ready to take a more challenging fight against higher-level opposition again and will be aiming to be the first man to beat Heaney in 16 fights.

Heaney is now 33 years of age and wants a stadium fight at the bet365 stadium next spring, he hasn’t faced the level of opposition that his counterpart has yet and this is the biggest fight of his career to date.

Ekow Essuman 17-0 squares off against Samuel Anwti 14-1 for the British and commonwealth welterweight championships in what I feel could be one of the domestic fights of the year. Both boxers have beaten good domestic opposition but champion Essuman will feel his extra experience with favour him as he defends his straps.

Belfast’s Anthony Cacace 19-1 finally returns to action after the bitter disappointment of being pulled from the Fury vs Whyte card at Wembley in April meaning he hasn’t boxed since August of last year. He faces 21-0 Michael Magnesi of Lazio, Italy. He is the IBO champion in the super featherweight division and this will be just the second time in his career that he has fought outside of Italy.

Raven Chapman 3-0 who is dubbed ‘the Queen of Queensberry’ faces Jorgelina Guanini 10-6-2 over 8 rounds. On just her second outing since signing with Frank Warren, she will be looking to bank some much-needed rounds and impress.

Mark Heffron is on a high after beating Lennox Clarke in just five rounds in July to win the British super middleweight title and on Saturday he faces Martin Ezequiel Bulacio 10-6 a South American brought in to give the domestic champion the wirey test he needs before the defence of his Lonsdale belt.

James Heneghan 7-0 goes up against Rod Douglas Jnr 3-4 over 6 rounds in the middleweight division.

Callum ‘The Tank’ Thompson 4-0 is in a four-rounder against Delmar Thomas 5-2.

Amaar Akbar 3-0 will open the show over four rounds against Karlo Wallace 0-2.

The event begins at 6 pm on BT Sports box office and can be purchased for £19.95 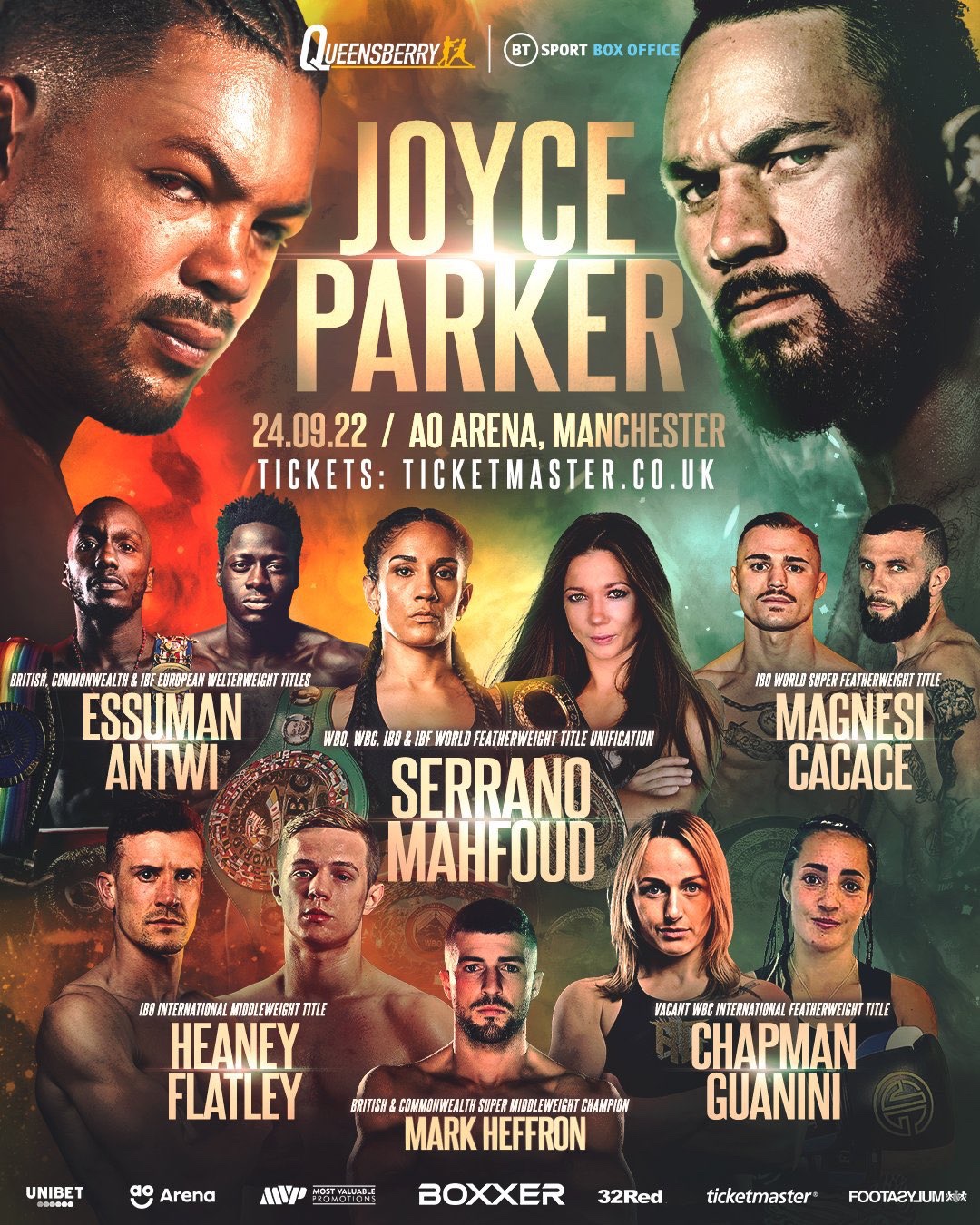