Day One of the Alfred Dunhill Championship on leg two of the South African swing on the European Tour, and a field of 156 players were here at Leopard Creek CC in Malelane to compete for the title and earn more points as the Race To Dubai comes over closer with just the Top 60 in the rankings making it through to the final event in mid-January.

Now Leopard Creek is a spectacular venue, which not only has the golf on offer to admire but also the nearby Game Reserves where you can view the wild animals such a water buffalo, hippos and the gorgeous big cats and lions, it really is a unique golf course and one many players, especially South Africans, want to play at.

There were plenty of home players in the field this week, and they were all having aspirations of winning in their home country, just as they did last weekend at The Joberg Open, and one particular twenty years old almost pulled that off last weekend before mistakes on the back nine on Sunday saw him lose out.

He is, of course, Wilco Nienaber who took the Joburg Open by storm last weekend after his runners up finish, but on Day One of this tournament he did have to battle quite a bit to eventually post a one-under-par 71 after plenty of mistakes throughout his round to be tied 35th with fourteen others, but a good round tomorrow could see him right back in the mix perhaps.

This was the same score as Brandon Stone, another good young South African golfer but with more experience than Wilco, and he is one of the highest-ranked players in the field this weekend in the Race To Dubai (32nd) so again a good second round tomorrow can see him climb up that leader board.

Another home player to shine last weekend and lead the Joburg Open after 36 holes were Sunshine Tour player Jacques Blaauw, who managed to shoot a three-under-par round of 69, ending his round well to be four shots off the lead after Round One in a tie for 8th along with several others, whilst highest world ranked player in the field Christiaan Bezuidenhout (ranked 61st in the world and 21st in the Race to Dubai) also shot a three-under-par 69 to be in decent shape after Day One.

The top South African on Day One though was another Sunshine Tour player (remember the European Tour and the Sunshine Tour are co-sanctioning this South African swing) in the name of Ockie Strydom, who ended the Round four under with a 68 and three shots off the lead in a tie for fifth.

What of last weekend’s winner, JB Hansen, who won his first European Tour in Joburg, well he shot a solid 70 on Day One to be tied for 24th and five back, so not a bad first day for the Dane.

Richard Bland was top Englishman, he is playing in his 468th European Tour event this week, and is still yet to win, and after a very decent showing last week he has carried on that good form with a five-under round of 67 to see him fourth and three shots off the leaders, whilst another British interest in the shape of Scott Jamieson finished a shot better to be right in the mix after Round One, he also had a solid performance last week too.

Some not so good performers in Round One, well Jorge Campillo, ranked 23rd in the Race to Dubai, shot 80 to be eight over and down in a tie for 147th, whilst Welshman Rhys Enoch, who performed well last week, ended with a 77 and five over par in a tie for 125th.  Another player who performed well last week and was in the penultimate group on the final day Aaron Cockerill shot a four-over 76 to be tied 106th, along with two home players Dean Burmester and Shaun Norris who also did well last weekend and are right on the bubble for the Top 60, so they both need very good second rounds to be here for the weekend.

Some more players who are in the top 60 of the Race to Dubai and struggled on Day One included Adrian Otaegui, Laurie Canter, Pablo Larrazabal, George Coetzee, who all shot over par rounds, whilst Robert Macintyre ended level par.  All will need decent rounds tomorrow to be not only in the mix but in the tournament come the weekend.  I believe 65 and ties make it through to the weekend so the cut line is currently one over par (79 players would make it through if it was done today) but obviously a lot can happen between now and tomorrow close of play.

Finally, the leaders, well two players managed to shoot 65 on Day One, Frenchman Robin Roussell and Polish golfer Adrian Meronk.  Nobody from Poland has ever led a Tour event after any Round or won on the Tour so he had already made history on the first stat, but could he change the other stat this week, well only time will tell but certainly a very good start to his tournament.  Here is the leader board below…

Sixteen players currently tied for 8th (only room for three on here!!!), it’s very tight as you would expect after Day One, I’ll be back with Day Two’s review tomorrow to see who can be in the mix after 36 holes and who manages to make the weekend, and the ones who don’t. 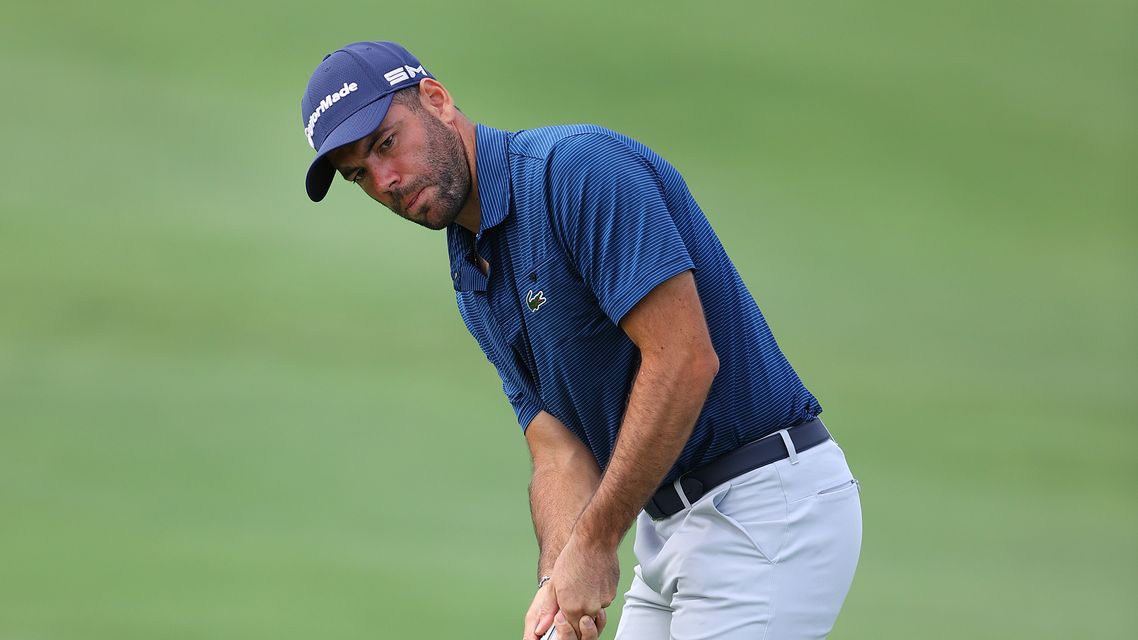