In a day that saw no rain across the country, Thursday saw Surrey top-order batsman Hashim Amla score a century while there were 16 wickets that fell at Chelmsford as Essex face Durham.

Essex made one change from their draw at Warwickshire with Michael Pepper coming in for Dan Lawrence who joins the England bubble ahead of the test series with New Zealand while Durham made 2 changes as Michael Jones and Matty Potts came in after their draw at Derby last week.

Durham would win the toss and elect to field with Sir Alastair Cook being the first man out as he was LBW to Chris Rushworth for 2 before Nick Browne was bowled by Potts for 23. Tom Westley was next man out, LBW to Ben Raine without scoring, with Paul Walter falling the same way for 28. Ryan ten Doeschate was the fifth man out as he was LBW to Borthwick for 8 before Michael Pepper was trapped the same way by Rushworth 8 short of a ton.

Simon Harmer would also fall LBW, this time to Raine, for 1 before Adam Wheater then Sam Cook would be dismissed for 8 and 0 respectively, both off Rushworth’s bowling. Peter Siddle was last man out, bowled by Raine without scoring, as the hosts collapsed from 179/6 to 182 all out – Rushworth and Raine taking 4 wickets each.

The Durham reply would see Alex Lees dismissed LBW to Jamie Porter without scoring with captain Scott Borthwick (8, LBW to Sam Cook) then Cameron Bancroft (20, LBW Siddle) in consecutive overs. Michael Jones would then be LBW to Cook for 4 with Jack Burnham out the same way to Siddle for 2. David Bedingham would be bowled off the final ball of the day by Cook for 10.

Warwickshire would make 2 changes from their draw at Essex with Matthew Lamb and Craig Miles coming into the team while Nottinghamshire would make one change as Zak Chappell came in for Stuart Broad who has joined the England bubble.

Nottinghamshire would win the toss and elect to field as Robert Yates would be bowled by James before Pieter Malan would be out LBW to Mullarkey for 17. An 85-run, third-wicket partnership between Will Rhodes (92) and Sam Hain would be ended by Dane Paterson getting the former out LBW before the latter would get out the same way off the same bowler for 61. Michael Burgess would also get out the same way for 3 with Tim Bresnan caught by Hameed off the bowling of Paterson without scoring, Lamb unbeaten on 43 at stumps.

Worcestershire would make one change from their innings defeat against Nottinghamshire with Ross Whiteley coming into the team while Derbyshire made one change as Ben McDermott came in for Harvey Hosein, who sits out after a concussion during their draw against Durham last week.

Daryl Mitchell would be LBW off the first ball of the match to Samuel Conners before Tom Fell would be second out as he was caught by Brooke Guest off the bowling of Conners for 12. Jake Libby would be next man out as he was ran out by Matt Critchley for 26 before Ross Whiteley would be dismissed for 22 by Wayne Madsen’s catch off Dustin Melton. A 114-run stand between Jack Haynes and Brett D’Oliviera was ended with the former out for 97, caught by Melton off Critchley, with the latter caught by Alex Hughes off Finn Hudson-Prentice for 71. Ben Cox (49) would be out off the final ball of the day, caught Guest off Ben Aitchison’s bowling with Ed Barnard resuming on 48 not out in the morning.

Leicestershire has made 3 changes as Ben Mike, Callum Parkinson and Will Davis coming in while Middlesex made 3 changes from their draw at Surrey with Stevie Eskinazi returning at the top of the order while Luke Hollman and Thilan Walallawita have come in to freshen the bowling attack.

The visitors won the toss and elected to bat with Sam Robson and Eskinazi getting an opening partnership of 52 before the former was trapped LBW off the bowling of Callum Parkinson for 23 with Nick Gubbins the second man dismissed via the same way off the bowling of Davis for 21. Eskinazi would be caught by Colin Ackermann off the bowling of Davis for 38 before Peter Handscomb would be LBW to Ed Barnes for 26. Robbie White (16, caught Ackermann) and Martin Andersson (LBW) would fall to successive Parkinson balls before a partnership of 90 between John Simpson (73 not out) and Hollman would be ended as the latter would be bowled by Barnes for 32 with Tom Helm 16 unbeaten at stumps alongside Simpson.

Surrey would make 6 changes from their home draw against Middlesex last weekend with Ryan Patel opening the batting, Laurie Evans and Will Jacks came into the middle order with Jamie Overton, Sean Abbott and Dan Moriarty freshening the bowling while Gloucestershire have made one change from their draw at Somerset with Jonathan Tattersall (on a 1-match loan from Yorkshire) replacing James Bracey with the wicket-keeping position.

Surrey would win the toss and bat with Mark Stoneman and Patel making 50 for their opening partnership before the former was LBW to Ryan Higgins before Patel would be caught by Kraigg Brathwaite off the bowling of David Payne for 62. Jamie Smith would be dismissed the exact same way as Patel for 2 with Laurie Evans caught by Tattersall off the bowling of Matt Taylor for 6. Will Jacks would be the final man out for the day, bowled by Higgins for 24, with a century-stand between Hashim Amla (103) and Jamie Overton (50) as they were the not out batsmen at stumps.

Wicket-keeper Harry Duke and Steven Patterson would put on 77 for the 8th wicket before the captain would be bowled by Matt Parkinson before Duke would be caught by Dane Vilas off the bowling of Tom Bailey for 52, his first half-century of his senior first-class career. Ben Coad (32 not out) and Olivier would put on 38 for the last wicket before the South African was caught out by Luke Wells off the bowling of Lamb for 10.

Lancashire would make a positive start with Jennings (22 not out) and Davies (52) putting on 71 for the opening partnership before the latter was caught by Duke off the bowling of Olivier with Luke Wells, 11 not out, the other batsman unbeaten at the close.

The hosts won the toss and elected to bat but would lose Aaron Thomason LBW to Ben Sanderson for 4 before fellow opening bowler Gareth Berg would dismiss Tom Haines via a Ricardo Vasconcelos catch for 13. Sanderson would also get Stiaan van Zyl (5, caught by Vasconcelos) and Travis Head (1, caught Berg) before Ben Brown would be caught by Adam Rossington off the bowling of Wayne Parnell for 9. Tom Clark would be the 6th wicket to fall as he would be bowled by Taylor for 11 before Parnell would get Delray Rawlins LBW for 2.

George Garton would be Sanderson’s next victim (another LBW) before a 99-run partnership between Jack Carson (52) and Henry Crocombe (46 not out) was ended by Sanderson as the former was caught by Taylor. Jamie Atkins would be last man out for 5 as he was caught by Ben Curran off the bowling of Berg, a score of 175 much higher than what they would imagine they would get when Garton got out on 67.

The Northants replay got off to a bad start with Curran getting caught out by Brown off the bowling of Crocombe for 7 before Luke Procter (9) would also be caught by the Sussex wicket-keeper off the bowling of Atkins. Vasconcelos was next out for 20, caught Brown off Garton, with Rob Keogh last man out of the day for 24 as he was caught by Rawlins off the bowling of Carson – Saif Zaib (14) and night-watchman Simon Kerrigan (3) the not out batsmen. 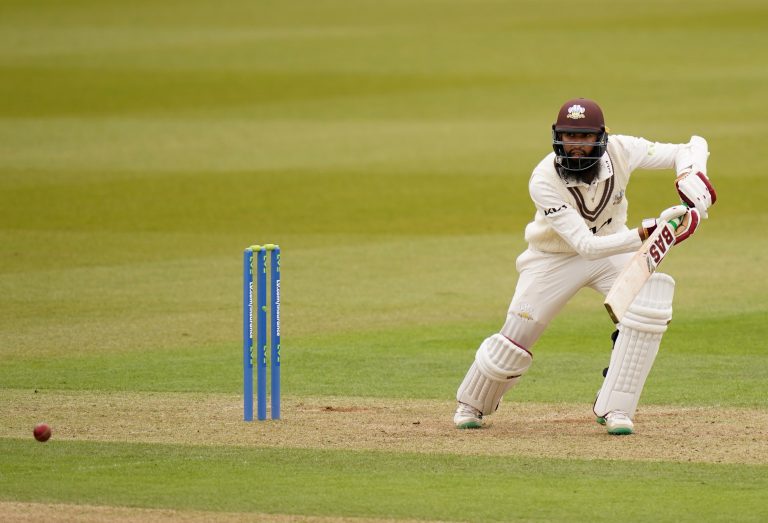