Friday’s action saw Keaton Jennings score his 19th century of his first-class career for Lancashire in the Roses clash at Old Trafford with Sam Cook finishing with four wickets for Essex at Chelmsford.

Resuming on 58/6, the visitors would add 21 to the overnight score before they would lose Ned Eckersley LBW to Sam Cook for 16 before Brydon Carse would be bowled by Peter Siddle for 10 in the following over. Matty Potts would be caught by Adam Wheater off the bowling of Jamie Porter before Chris Rushworth would be bowled the following ball by Porter.

Nick Browne would be LBW to Raine for 6 before Sir Alastair Cook would be bowled by Rushworth for 7 with Tom Westley also LBW to Raine for 1 in three successive overs. Paul Walter (22) and Michael Pepper (16) would both be caught by Eckersley off the bowling of Raine and Carse off successive overs before a 125-run partnership between Ryan ten Doeschate and Adam Wheater was ended with the former LBW to Carse for 55. Wheater would be ran out by Potts for  81 before Siddle would be caught by Eckersley off Carse for 5 with Simon Harmer (30) and Cook (11) the not out batsmen at close.

The Notts reply would get off to a decent start with Ben Slater and Haseeb Hameed, the latter called up for England for the first time in almost 5 years, putting on 72 for the opening partnership before the latter was bowled by Norwell for 39 with Ben Duckett following shortly after for 4, LBW to the same bowler. He’d also get a third wicket before stumps as Slater would be caught behind by Michael Burgess for 77 with Joe Clarke and Lyndon James the not out batsmen overnight with 48 and 4 respectively.

Resuming on 336/7, the hosts would add 28 to their overnight score before Alzarri Joseph would be caught by Billy Godleman off the bowling of Dustin Melton for 12. Captain Joe Leach would be ninth man out as he was bowled by Melton for 5 before a 45-run last-wicket partnership between Ed Barnard and Dillon Pennington (24 not out) would be ended with the former caught by Ben McDermott off the bowling of Matt Critchley for 90.

Resuming on 260/7, the visitors would add 2 to their score before Tom Helm was caught by Harry Swindells off the bowling of Ben Mike for 17 before Ethan Bamber also falling the exact same way for 4. Thilan Walallawita would be last man out for 6, bowled by Chris Wright, leaving wicket-keeper John Simpson stranded on 95 not out.

In the Leicestershire reply, Hassan Azad was the first man out as he was caught by Stevie Eskinazi off the bowling of Bamber without troubling the scorers with Marcus Harris falling LBW to Helm for 3. Colin Ackermann would be third man out, caught out by Sam Robson off the bowling of Helm before Sam Evans being caught by Simpson off the bowling of Martin Andersson. Swindells and Mike would fall to successive balls, both LBW to Andersson for 1 and 0 respectively, as they were 42/6. Lewis Hill would be next man out for 39 bowled by Andersson (finishing with figures of 4/27) before Callum Parkinson would fall LBW to Bamber for 41. Wright would be the ninth man out, also LBW to Bamber, for 23 before Ed Barnes would be bowled by Luke Hollman for 6.

Middlesex’s second innings saw Sam Robson the only man out, LBW to Wright, for 6 with Eskinazi and Nick Gubbins the unbeaten batsmen with 31 and 20 respectively.

Resuming on 285/5, the hosts would lose Jamie Overton to the first ball of the morning for 50, caught by Jonny Tattersall off the bowling of David Payne, with Sean Abbott caught LBW to Smith for 40. Hashim Amla would fall for 173 as he was bowled by Miles Hammond with the last two wickets both bowled by Higgins as Rikki Clarke and Dan Moriarty would be dismissed for 65 and 4 respectively.

Chris Dent would be the only man out, caught by Moriarty off the bowling of Amar Virdi, for 14 with Kraigg Brathwaite and Miles Hammond not out for 27 and 4 respectively.

Resuming on 95/1, Keaton Jennings and Luke Wells would move the score up to 246 before the former was caught by Tom Kohler-Cadmore off the bowling of Ben Coad for 114 before Wells would follow 4 balls later, also caught by the Yorkshire opener off the bowling of Jordan Thompson, for 60. Liam Livingstone would be caught out by Duanne Olivier off Thompson before Dane Vilas (35, caught Kohler-Cadmore off Coad) and Luke Wood (7, caught Harry Duke off Thompson) leaving Josh Bohannon and Danny Lamb the unbeaten batsmen on 47 and 4 respectively.

Resuming on 91/4, the visitors would lose night-watchman Simon Kerrigan for 15 as he was bowled by George Garton before Adam Rossington would also lose his wicket to the spinner, caught by Tom Clark. Tom Taylor (3) would be ran out by Travis Head before the Australian would take the catch to get rid of Wayne Parnell for 1. Saif Zaib would be the ninth wicket, caught by Ben Brown off the bowling of Atkins for 64 before Ben Sanderson would be bowled by Garton for 20 (Gareth Berg the not out batsman on 43).

Opener Tom Haines (64 not out) would bat the rest of the day with wickets falling at the other end, first Aaron Thomason would be caught by Rossington off the bowling of Sanderson for 8 then Stiaan van Zyl (17, caught and bowled) and Head (0, caught Ricardo Vasconcelos) would both be dismissed by Simon Kerrigan. Tom Clark would be the last man out in the day’s play for 13 with Brown joining Haines at the end, sitting on 34 not out. 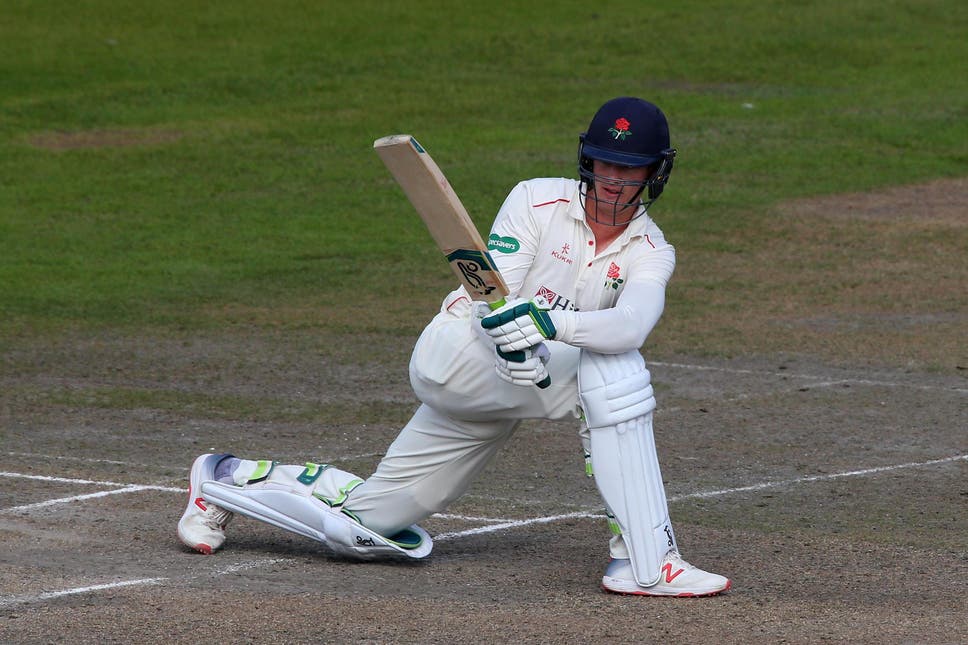