We saw career-best figures for Ben Aitchison as well as a century for Rory Burns in Sunday’s County Championship action as rain would continue to give us a stop-start season.

Resuming on 20/2, Durham would get to 43 before captain Scott Borthwick would be caught behind by Brooke Guest off the bowling of Ben Aitchison for 14 before David Bedingham was caught by Anuj Dal for a duck 3 balls later. Jack Burnham was the next man out for 6, caught by Guest off Samuel Conners before a 60-run partnership from Cameron Bancroft (39) and Ned Eckersley was ended by the Australian LBW to Matt Critchley.

Stuart Poynter was the next to go with 165 on the scoreboard as he was caught out by Leus du Plooy off the bowling of Critchley before Eckersley (82) and Mark Wood would both be out to Aitchison with Brydon Carse the last man out to Critchley.

Derbyshire travels to Worcestershire next weekend with Durham host Essex at the same time.

Resuming on 0/0 in their second innings, Warwickshire would see a 63-run opening partnership between night-watchman Danny Briggs and Will Rhodes before Briggs was caught by Dan Lawrence off the bowling of Sam Cook with Rhodes and Dom Sibley finishing not out on 22 and 2 respectively.

Essex travel to Durham next weekend with Warwickshire hosting Nottinghamshire at the same time.

Resuming on 53/6, they would add 1 to their overnight score before Josh Tongue was caught behind by Tom Moores off the bowling of Luke Fletcher for 7 before West Indian Alzarri Joseph was dismissed the same way of the same bowler for 4. Ben Cox was next out for 19 as he was caught by Moores off the bowling of Stuart Broad with Dillon Pennington also falling to Broad, caught by Ben Duckett for 4 – the visitors 80 all out.

Following on, Daryl Mitchell was first man out as he also fell to the Moores & Fletcher combination for 1 before Tom Fell (13, caught Slater) and Jack Haynes (0, caught & bowled) in 4 balls of another Fletcher over with the score on 63. Jake Libby would be dismissed for 63 as he was caught by Dane Paterson off the bowling of Stuart Broad before Riki Wessels would be caught of the bowling of Lyndon James for 10.

Ben Cox would be LBW to Paterson without scoring before Brett D’Oliviera and Joseph dismissed within 3 balls to Paterson and Broad respectively. The final couple of wickets would fall to Paterson with Joe Leach LBW for 7 and Tongue bowled for 6. Fletcher ended with 10 wickets in the game while Moores taking 6 catches across the 2 innings.

Nottinghamshire travel to Warwickshire next weekend with Worcestershire hosting Derbyshire at the same time.

Resuming on 16/2, the hosts would lose Tom Smith and Tom Lace in the space of 3 Craig Overton balls (LBW and caught by Steven Davies respectively) before Kraigg Brathwaite would be caught by Tom Abell off the bowling of Josh Davey, all with the score on 21. Ian Cockbain would be bowled for 1 while Ryan Higgins (5) and Miles Hammond (0) would be the unbeaten batsmen as the rain would fall after 32 balls.

Gloucestershire travel to Surrey next weekend with Somerset hosting Hampshire the following weekend.

Resuming on 135/0, the hosts would lose their first wicket with the third ball of the day as Mark Stoneman would be caught behind by John Simpson off the bowling of Ethan Bamber for 74 with Hashim Amla the other man out, caught by Davies off the bowling of Tim Murtagh, for 43 – Rory Burns (104) and Ollie Pope (37 off 20) getting quick runs to set up a declaration.

Chasing 290 to win, Jack Davies would go early for 2 as he was caught by Pope off the bowling of Kemar Roach before Sam Robson would be the next dismissed for 32, caught by Rikki Clarke off Reece Topley’s bowling. There was a 172-run partnership between Nick Gubbins (124) and Peter Handscomb (70) before the Australian was caught by Pope off Roach before a mini-collapse of John Simpson (4), Gubbins and Martin Andersson (7) all falling to Roach as the West Indian bowler took 5/86 from 19 overs.

Surrey host Gloucestershire next weekend with Middlesex travelling to Leicestershire at the same time.

With Glamorgan declaring overnight, Kent’s Ollie Robinson (14) and Jordan Cox (27 not out) would open the batting, putting on 28, before Robinson caught behind off the bowling of Michael Neser with Cox and Zak Crawley (18 off 15) moving the score onto 60/1 after 10 overs as a target of 304 was set for Glamorgan.

They wouldn’t chase the target, as there were only 7 overs before the end of the game – David Lloyd the only wicket to fall after being bowled by Matthew Quinn for 17 with Joe Cooke (6) and Marnus Labuschagne (0) the not out batsmen.

Kent hosting Northamptonshire in a fortnight while Glamorgan hosting Lancashire at the same time.

Just 6.2 overs were possible in today’s play with Alex Davies (51) and Luke Wells (7) the not out batsmen at the end of the play.

Northamptonshire travel to Sussex next weekend while Lancashire host Yorkshire in the TV game. 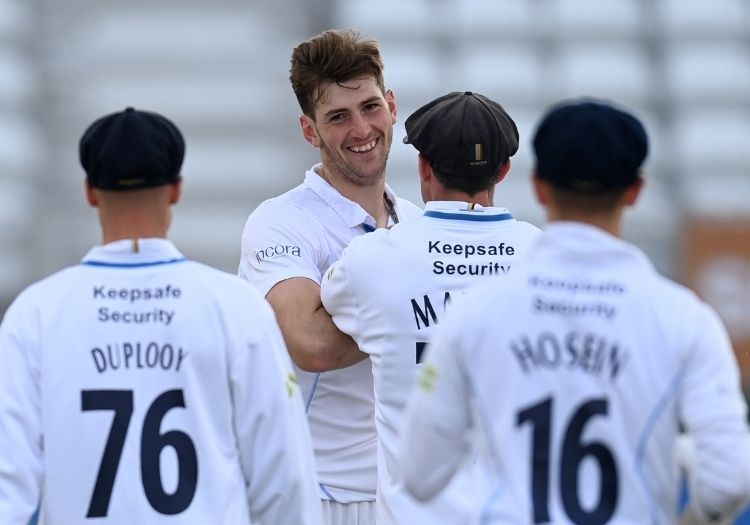