The North London derby is one of the most highly anticipated games in world football. Tottenham vs Arsenal. Conte Vs Arteta. And what a game it was. There were some notable changes for Spurs with Dejan Kulusevski back in the Tottenham line-up and Richarlision back on the Spurs bench. Spurs were coming off a 4-0 win against Crystal Palace. While Arsenal was coming off a 0-0 draw against Newcastle. Tottenham tried to press Arsenal early on in the game with high intensity. The first chance was an Arsenal chance in the 6th minute. Tottenham keeper Hugo Lloris spent too long on the ball and was dispossessed. The ball found its way to Arsenal attacker Eddie Nketiah who grabbed the opportunity but his effort was well saved by Lloris.

The first goal of the game came in the 13th minute. A beautiful ball found its way to Bukayo Saka who found himself one-on-one with Tottenham Full-back Ryan Sessegnon. Saka unleashed a cross that slightly deflected off of Sessegnon however it would be Tottenham keeper Hugo Lloris who was a fault for the goal. The keeper parried the shot into the back of the net and gave Arsenal the lead in the game. After the first goal, the energy and spirit seemingly drained from Spurs. Tottenham managed to bounce back momentarily and created a good chance in the 18th minute when Ryan Sessegnon played clever through ball to Heung-Min Son who unleashed a powerful shot. However, the effort was well saved by Aaron Ramsdale. Arsenal responded straight away however with Arsenal midfielder Martin Odegaard unleashing a venomous shot in the 21st minute that Hugo Lloris did well to keep out.

Arsenal continued to pile on the pressure with Arsenal midfielder Thomas Partey unleashing a thunderbolt of a strike in the 24th minute that rattled off of the post before it was nervously cleared away by Pape Mattar Sarr. A second goal eventually came for Arsenal in the 35th minute. Bukayo Saka found himself in miles of space out on the right side. He played a simple pass to Martin Odegaard who placed an accurate shot past Hugo Lloris who had no chance. Arsenal was 2-0 up and Tottenham was in despair. A 47th-minute header from Harry Kane gave Spurs a slight glimmer of hope however the chance was parried away well by Aaron Ramsdale. The whistle for the end of the first half sounded and Arsenal was cruising while Spurs hadn’t even gotten out of first gear.

The second half began and as expected from a Spurs side this season they came out much stronger than in the first half. Harry Kane unleashed a powerful shot in the 49th minute that was expertly saved by Aaron Ramsdale as Spurs looked to grab a foothold in the game. Another chance for Spurs came moments later when Ryan Sessegnon found himself in front of the goal however Spurs were once again denied by an excellent save from Arsenal keeper Aaron Ramsdale.

Spurs created a lot more chances in the second half with Spurs winger Dejan Kulusevski finding himself in good positions however his end product simply wasn’t good enough and it left Spurs unable to make the most out of their opportunities.

ALSO READ:  Cristiano Ronaldo and Lionel Messi will meet again when PSG plays a Saudi all-star XI in a friendly on January 19th in Riyadh

The full-time whistle blew and Arsenal left the Tottenham Hotspur Stadium with not only a 0-2 victory but 3 points. Arsenal now finds themselves 8 points clear at the top of the table and have achieved their first league double over Spurs since the 2013-2014 season. In contrast, Spurs sit in 5th position and 5 points behind Manchester United who have a game in hand. Overall a massive win and occasion for Arsenal who continues their battle towards the Premier League title. For Spurs, it’s a familiar poor and gutless performance that fans and Antonio Conte are too used to seeing. 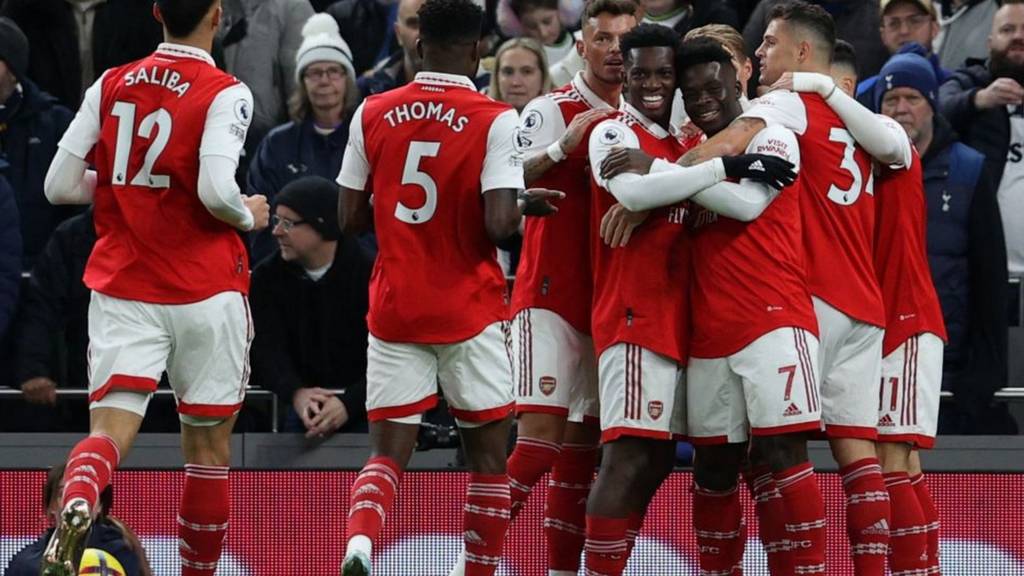