A 2-0 win by Arsenal sends the Gunners into the quarter-final of the Carabao Cup. Goals by substitute Callum Chambers and Eddie Nketiah sealed the victory as they brushed past Bielsa’s men comfortably.

The game started more evenly than the scoreline suggested with Leeds defending well. Dan James maintained a threat during the game with his electrifying pace causing Arsenal problems on the counter-attack. This is where the best opportunity of the half came when Diego Llorente’s long ball split open Arsenal’s defence, only for the Welshman to miss control the ball for Bernd Leno to calmly collect.

Leeds were enjoying the better of the chances with Bernd Leno called to action again after Jack Harrison’s half volley from inside the box was parried wide by the Arsenal Keeper to keep the game squared.

Arsenal’s Smith-Rowe then had an opportunity to open the scoring after Pepe’s loose touch fell to him on the outside of the box. His shot, however, failed to hit the target with the Leeds keeper not having to make a move.

An injured Ben White was substituted early into the second half for Callum Chambers and it only took 23 seconds for the substitute to make an impact. Pepe’s header back into the penalty area was met by Chambers who’s headed effort was saved by Meslier. The referee eventually awarded the goal through goal-line technology.

Arsenal’s goal spurred the team on and they grew with confidence as the game continued. Former Leeds loanee Nketiah (pictured above) doubled the scoring for Arsenal after capitalising on a poor headed backpass. The Arsenal forward lofted the ball over the keeper and scuffed his shot in an empty net to make it seven goals in eight appearances in the League Cup.

Lacazette had an opportunity to get on the scoresheet after Phillips lost possession of the ball in midfield. The Frenchman swept past two of the Leeds players only for his shot to be blazed over the crossbar.

Speaking to Sky Sports, Arsenal boss Arteta says: “I think a really good performance overall against a team whose manager demands them to be so committed in every single action. We played well and understood the game and executed it in the right way.

“They gave us some issues, they always do, because every time you lose a duel you can be one vs one, the way they play! We adjusted a few things at half-time and we got better and stronger.”

Arteta has now reached the Quarter-final of the League cup with Arsenal for the second year in a row – but can he take it one step further and get to the next round? The draw for the quarter-finals will take place on Soccer AM this Saturday morning. 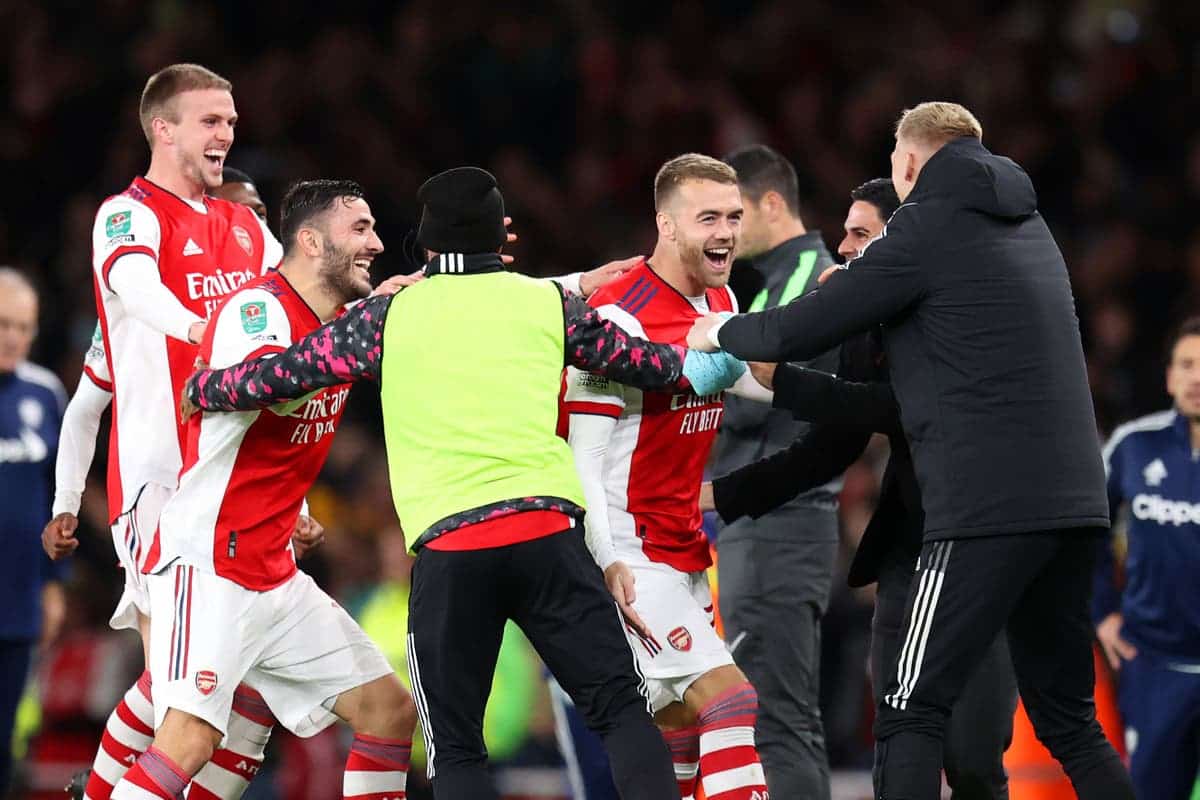