With the first Ashes Test just around the corner, it’s time for World In Sport to decide what Joe Root’s team may look like, once they take the field at The Gabba. The Test takes place from 8th-12th December.

Since the retirement of Sir Andrew Strauss and Sir Alistair Cook, England have struggled to find an established pair at the top of the order. Sam Robson to Dom Sibley, to Rory Burns, who do they go with next?

Perhaps the Notts Outlaws right-hander may be the answer. The 24-year-old made his debut in 2016 against India scoring 82 in the first Test in the second innings, before a broken finger kept him out of England selection for five years.

Hameed made a comeback during the Home Series with Virat Kohli’s side, after Dom Sibley’s lack of form cost him a place in the XI. He scored 68 in the third Test which England won by an innings and 76 runs. He also scored 63 in the second innings of the fourth Test. Can he continue his impressive return to Test cricket this winter?

Partnering with the Outlaws opener could be the Surrey Left-hander. Although he was not at his best in the five matches against India, he did score two 50+ scores and a 49 in the second innings at Lord’s. Burns also scored his maiden Test hundred when the two sides previously met back in 2019 in the 1st Test at Edgbaston.

He was England’s second-highest scorer with 390 runs in all five matches.

If these two batsmen are the candidates to open the batting, blunting that new ball will be crucial in helping England to post a competitive score on the board.

From the third Test of the India series, it seems like the Yorkshire Left-hander could be the solution to England’s problems at number three, particularly if the captain does not want to bat in that position. After Zack Crawley and Hameed failed miserably in that position, Malan was called up to fill in the vacant spot for the third Test against the Indians at Headingley.

ALSO READ:  Root And England Set For The Ashes Down Under

His dogged innings of 70 created the platform for England to produce a dominant victory by an innings and 76 runs. He will also add to that left-hand/right-hand combination at the top of the order, which could be crucial with in facing the likes of Mitchell Starc. Malan averages 35.33 in that position.

Can he cement his position at the top of the order in Brisbane?

Even though some experts, most notably, Micheal Vaughan, want the England Captain to bat at three, he is likely to bat in his most favorable position, at number four, and his stats in that position back him up.

Root is the number one ranked Test batsman and averages 57.85 at four and 38 .66 at number three. Whether he bats at three or four in this series, if England are to stand any chance of taking back the Urn, their captain will need to lead from the front. But with an average of 38.00 in Australia can he deliver the goods when it matters?

Guess who’s back? Yes, Ben Stokes. And England will need their number one to deliver with bat, ball, and in the field if they are going to stand a chance of overturning Australia in their own backyard. The Durham all-rounder took time out of the game during the summer to prioritize his mental wellbeing. And should be fresh for the test.

Stokes played an influential role in the last series in England, becoming the highest run-scorer for England with his two centuries, the second of which coming in that famous run-chase at Headingley.

What will he have in store for the series Down Under?

Due to his ability to adapt to different scenarios, the Lancashire Keeper-batsman is likely to bat in the specialist number six position. Buttler is regarded as one of the world’s top white-ball players, certainly in T20 cricket, but what has been so impressive over the past couple of years is his adaptability to the longer format.

Buttler was fairly average with the bat against India. Scores of 17, 25, and 7 were all he could manage in the three Tests. He missed the fourth Test due to paternity leave. With the 31-year-old on 2,800 Test runs, can he make it to 3,000?

The Yorkshire keeper-batsman could be slated to come in at number six in the batting order. Whether he’ll also be taking the gloves or not is another matter, but England will need his experience in that middle order. Bairstow had a relatively average series with the bat against India. He scored 184 runs in four of the five Tests at an average of 26.28 including one 50.

Given the fact that Joe Root is likely to go in with one spinner for the first Test, the likelihood of Leach being selected over Dom Bess is greater purely based on their respective form over the past two years. if we combine the India and Sri Lanka tours together, Leach picked up 45 wickets at an economy rate of 3.21 in India and 2.91 in Sri Lanka. Bess picked up 12 wickets at a rate of 1.62 vs Sri Lanka and five wickets in India for an economy rate of 3.86.

Leach was also part of England’s squad for the home series against India. However, veteran Off-Spinner Moeen Ali got the nod ahead of him in the playing XI as it was his last match before announcing his retirement from Test Cricket. Should he be selected for the first Test, skipper Root will be hoping he can hold up an end to rotate his seamers.

One of England’s finest bowlers is likely to bat at number nine. England will need him more with the ball, but with two Test centuries to his name, he has shown that he is no slouch with the bat. However, in 2011 he was struck on the nose by Varun Aaron during a Test Series against India. Since then, his confidence in batting has fallen drastically as he now averages 18.52.

Broad’s main attribute, of course, is with the ball. 524 wickets at an average of 27′.84 are exceptional figures and he is a top-class bowler. What will he bring to this year’s Ashes?

As the first Test is at The Gabba, it may be best for England to unleash the pace of the Durham speedster early on in the series. Traditionally, the Gabba pitch is fast and bouncy and can be a nice wicket to bat on. Given the fact that it is a five-match series, England may decide not to pick him and manage his workload throughout the series.

His chances of playing though, depend on the conditions of the pitch. If it offers pace and bounce, he will be more than a handful. With 64 wickets in 20 Tests, he will look to improve on that stat. He missed the 2019 home Ashes Series due to injury. Will the Tour Down Under bring fortune for him?

The world’s greatest fast bowler has a key role to play this winter with the ball and will be leading England’s bowling attack. Although the Gabba isn’t really a swing and seam bowling track, Root will still need his experience to get big wickets.

Anderson will be hoping to get a step closer to Shane Warne in the all-time wicket-takers list. The Lancashire seamer is on 632 wickets, so he is a fair way of Warne’s 708, Can he get to 650 in this Ashes series?

This is World in Sport’s predicted England XI for the First Test. Let us know yours. 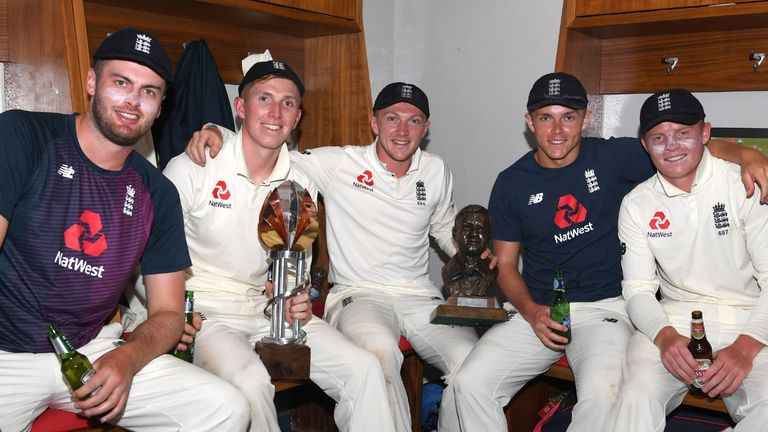