Hosts Australia decimated Afghanistan, beating them by 275 runs in their pool A clash today at Perth. They scored 417/6, the highest total for a team in world cup history. Afghanistan could only manage to score 142 before being all out. The win boosted Australia’s net run rate, as they climbed to no. 3 in pool A.

Earlier in the day, Afghanistan won the toss and invited Australia to bat first. Dawlat Zadran struck early dismissing Finch for just 4 runs. However, that would be the only occasion to celebrate for his team early as Warner and Steve Smith then built a partnership of 260 runs at a run rate of 7.53 an over, indicating that the Aussies would be going for a big total. Warner was magnificent with the bat as he smashed his way to 178 runs off 133 balls, hitting 19 fours and five sixes. Their partnership lasted till the 38th over when Shapoor Zadran picked up Warner’s wicket, after Mohammed Nabi took the catch at mid-on.

The dismissal would not slow down the run rate for Aussies as Smith and Maxwell scored 65 runs from just 5.2 overs in the 3rd wicket partnership. Smith was unfortunately dismissed by Shapoor Zadran at 95 after hitting eight boundaries and a six. 339/3 and Faulkner came out to bat for the first time in the tournament.

Maxwell and Faulkner scored 43 from just 3.2 overs, accelerating the run rate before Hamid Hassan bowled Faulkner. Maxwell’s hard-hitting came to and end when he was caught at extra cover courtesy to Nabi. His 88 runs from 39 balls, consisting of six boundaries and seven sixes helped Australia to score beyond 400.

Marsh and Haddin scored 27 in the sixth wicket partnership before Marsh was out from the last delivery of their innings by Nawraz Mangal. Australia scored 417 in 50 overs losing six wickets. Dawlat and Shapoor Zadran picked up two wickets each for Afghanistan.

In reply, Afghanistan lost their top three batsmen early scoring only 46 from 10.2 overs. Johnson picked up Usman Ghani’s wicket at 30. Hazlewood dismissed Ahmadi in the next over. Johnson dismissed Ashgar at 46 spelling danger for the Afghans. Samiullah Shenwari and Nawraz Mangal scored 48 in the fourth wicket partnership before Australian skipper Clarke brought himself to the attack and removed Shenwari(17). Nawraz scored 33 from 35 balls, hitting two fours and sixes each and was posing a threat to the Aussies before Johnson claimed his wicket in the 21st over. 94/5 and it all went downhill for Afghanistan from there.

Skipper Nabi was dismissed by Maxwell only for 2. Nazibullah Zadran and Afsar Zazai built a partnership of 28 runs in the seventh wicket before Starc bowled Nazibullah(24). Dawlat Zadran(0) was also dismissed by Starc in the same over. 131/8 and the Afghans had nothing left to avoid a huge defeat.

Hazlewood picked up Afsar Zazai’s wicket at 140 before Johnson dismissed the last Afghan batsman, Hamid after a catch by Warner at short mid-wicket in the 38th over. 142/10 and the 275 run victory for Australia was the biggest for any team in the world cup history! Johnson picked up 4 wickets giving away 22 runs.

During the presentation ceremony, both the skippers praised Australian batsmen Maxwell and Warner for their performances. Clarke remarked that the team was ready to deliver their best against Sri Lanka on Sunday. Man of the match Warner hailed his side for their superb effort throughout the game.

The win gives Australia the much-needed rhythm before their epic clash against Sri Lanka at the SCG on March 8. The main XI may remain unchanged for that game with Faulkner getting in and Watson sitting out. A win against Sri Lanka will not only hand Australia the second place in pool A, but also confirm their qualification to the quarter-final. 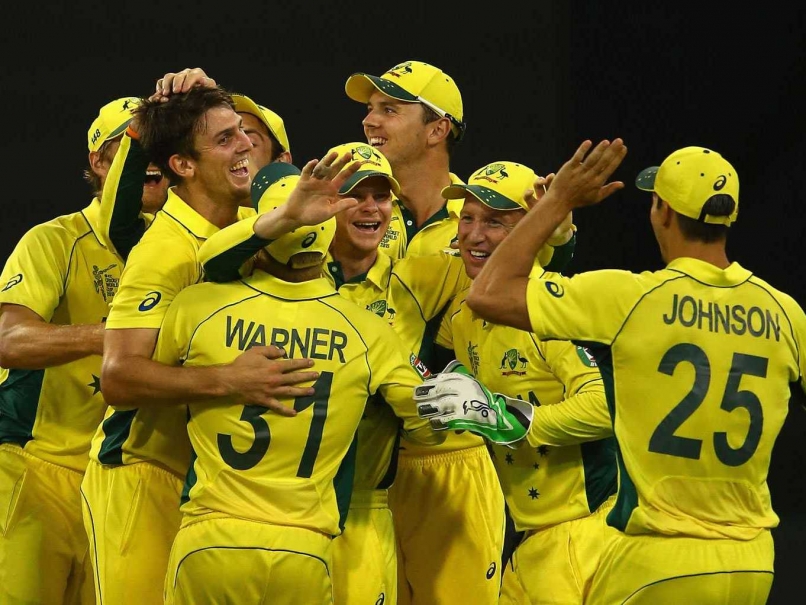