Pretty likely locking up a run at his record-tying seventh championship after the second race in the season.

Jimmie Johnson started near the back after failing to get in a qualifying run because of inspection issues. But Johnson was the fastest car on the track at the end of the weekend, cruising across the finish line a comfortable 1.803 seconds ahead of Kevin Harvick.

“I’m just so excited that the guys could understand — we’ve got new guys — this new team could understand what I was complaining about and the things I didn’t like about my race car,” said Johnson. “… This thing was just bad fast. I had a blast racing with the No. 4 (Harvick). He was awfully strong today. I think track position there at the end set things in place.”

Kevin Harvick led a race-high 116 laps after passing Earnhardt Jr. for the second spot with less than 10 laps to go. Pole sitter Joey Logano followed up his Daytona 500 win one week ago with a fourth-place result, and Kenseth completed the Top 5.

After a relatively clean race for much of Sunday afternoon, a number of top contenders were eliminated on Lap 257 when Denny Hamlin got sideways off Turn 2 following a restart.

Racing at the front of the pack, Hamlin’s car shot down the track, collecting the No. 31 Ryan Newman aswell as the No.1 Jamie McMurray.

That contact sent McMurray’s car back up the track, hitting Jeff Gordon’s in the left rear tire.

“It wouldn’t have been too bad, but I found the one spot where there’s no SAFER barrier. I can’t believe it. That’s amazing to me,” said Gordon. “Hopefully soon that will get fixed. That was a pretty big impact.”

Hamlin took blame for the incident, saying he was trying to avoid hitting teammate Carl Edwards.

“I moved to the right of him and I was right on the door of the 4 (Kevin Harvick) and it just sucked the back around and that was it. I apologize to all those cars involved.”

Track officials had increased the amount of padding in Atlanta after Kyle Busch smashed headfirst into an unprotected wall during an Xfinity Series race in Daytona, leaving him with a broken right leg and left foot. 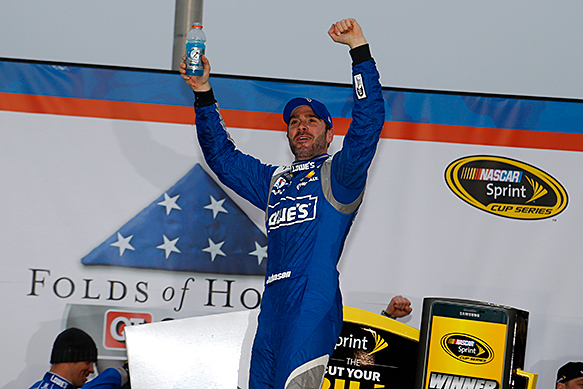