Despite the poor bowling, the Bangladeshi batsmen led the team to glory against Scotland, successfully chasing 318!

Bangladesh beat Scotland by 6 wickets today during their pool A clash at the Saxton Oval, Nelson. A spirited Scotland scored 318/8 but the Bangladeshi batsmen stood tall at the end of the day, as they successfully completed the second highest run-chase in world cup history. They now require one more victory to qualify for the quarter finals.

Earlier in the day, Bangladesh won the toss and elected to field first. Scotland scored 39 runs in their first 10 overs, losing two wickets. Mashrafe picked up the wicket of MacLeod(11) due to a catch at cover by Mahmudullah and Taskin dismissed Gardiner(19) when Soumya took the catch at cover. A 78 run partnership in the third wicket between Machan and Coetzer steadied the run rate for the Scots. Their partnership took Scotland beyond 100 before Machan, who scored 35 from 50 balls, hitting two boundaries and a six, gave a return catch to Sabbir. After 24 overs, Scotland were 116/3.

Mommsen joined Coetzer in the crease and the duo scored 141 in the 4th wicket at a rate of 7.48 an over, enabling the Scots to pile up a huge total. Nasir provided the breakthrough for his team, dismissing Mommsen(39) in the 43rd over. However, Coetzer was the danger-man as he picked up a hundred, scoring 156 from 134 balls, hitting 17 fours and four sixes. His innings helped the Scots to go past 300!

At 269, Nasir also picked up Coetzer’s wicket after a brilliant catch from Soumya. The wicket could not slow down the Scottish batsmen as Berrington and Cross scored 39 at a rate of 10.17 per over in the 6th wicket partnership before Taskin came back and claimed Berrington’s wicket in the 49th over. Taskin also dismissed Cross from the last delivery of that over. Scotland finished their innings at 318/8 and lost the wicket of Haq in the last over from Shakib’s ball, after a superb catch from Soumya at deep square leg. Taskin picked up 3 wickets for his team but could only bowl 7 overs, due to poor decision-making of skipper Mashrafe.

Mushfiq joined Tamim in the crease due to Anamul’s injury and built a partnership of 57 in the 3rd wicket, at a rate of 7.12 per over. At 201, Davey dismissed Tamim, who scored 95 from 100, hitting nine boundaries and a six. Mushfiq and Shakib quickly scored 46 from 6.3 overs and accelerated the run chase for Bangladesh. Hitting six boundaries and two massive sixes, Mushfiq smashed his way to 60 before Evans dismissed him, after a catch from MacLeod at long on. 247/4 after 38 overs and Bangladesh were still confident of winning the contest from there.

Sabbir Rahman joined Shakib and the duo scored an unbeaten partnership of 75 from just 61 balls leading the Tigers to victory. Sabbir scored 42 from 40 balls, courtesy to four boundaries and two sixes. Shakib, on the other hand, picked up his fifty hitting a boundary from the last ball, which also led Bangladesh to the 6 wicket win. His 52 from 41 balls, courtesy to five boundaries and a six was the fuel that lit fire in Bangladesh’s run chase as they ended up scoring 322/4 from 48.1 overs.

During the presentation ceremony, Scottish captain Mommsen praised his side for playing well in all four of their group matches and praised Coetzer, who was declared man of the match, for his performance. Bangladesh skipper Mashrafe hailed Tamim, Shakib and Mushfiq for their batting but remarked that it was a poor performance from the bowlers. He said that the team would have to be at their best in all three fields(batting, bowling and fielding) if they wished to tackle England and qualify for the knockout rounds.

The win enables Bangladesh to sit comfortably at no. 4 in pool A and should they beat England on March 9 at Adelaide, they will qualify for the quarter finals. If they fail to do so, a victory in their last match against the Kiwis will be crucial for qualification. 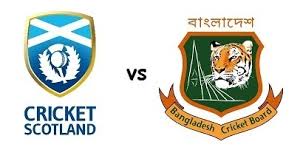