Monday Night Football in the Premier League saw two games on the agenda and affecting both ends of the table too, The Baggies hosted The Saints at The Hawthorns whilst The Seagulls welcomed The Toffees to the South Coast…

The equation was simple for the hosts, three points however they got them, and they brought a whole host of confidence into this game after netting five at Stamford Bridge last weekend in a stunning and unthinkable 5-2 win against a Chelsea side who had been flying under Thomas Tuchel.

Southampton though also came into this one off the back of a fine home win over Burnley which saw them open up a ten-point gap to Fulham in the final relegation place to virtually see them safe now, although another win here would certainly help that cause too, although they did have an FA Cup Semi-Final to come at the weekend so would this be in the back of their minds perhaps?

The Baggies certainly needed the win more though that was for sure so you would have expected them to be on the front foot and attacking as much as they could to get the goal(s) to win this game, they still are eleven points from safety with just eight games to go so it still looks a step to far for them, but a win would at least keep their belief going for now.

West Brom thought they had got the perfect start inside four minutes when Mbaye Diagne headed home a Darnell Furlong effort from close range, but it was ruled offside, and on VAR inspection Diagne looked onside but because VAR could not draw a definitive line for the striker due to the angle of the camera, they stuck with the on-field decision, crazy but that’s what we are dealing with these days, would it cost West Brom in this game?

It seemed not as West Brom edged in front just past the half-hour mark when after Matheus Pereira had been brought down by Fraser Forster, he picked himself up to drive the spot-kick down the middle, and then moments later The Baggies doubled their advantage when a superb ball from Diagne picked out Matt Phillips at the back post who converted superbly, and The Baggies had a deserved two-goal cushion. They had been superb in the first half.

The Saints had been average at best and could and should have been further behind if truth be told, and no doubt manager Ralph Hasenhuttl would have given his side a rocket at half time in the dressing room, and also reminded them they came from two goals down against Burnley in their last outing, they needed to be much better than was for sure as some of this side were quickly playing themselves out of the FA Cup Semi-Final side for the weekend coming.

The Baggies reverted to a more defensive tactic in the second period and looked as if they were happy to hold on for what they had and play on the counterattack, meaning Southampton did have much more of the attacking play early in the second period, but in the 69th minute, West Brom sealed the points when a ball through from Okay Yokuslu saw Callum Robinson outpace his marker before drilling home.

The Saints did have the chance to grab a consolation in stoppage time when Moussa Djenepo was fouled by Conor Townsend inside the box, but Sam Johnstone palmed away James Ward-Prowse’s spot-kick and the hosts had that clean sheet and more importantly another three points, they were superb in this one whilst Southampton need to regroup and go again and must respond in that FA Cup Semi-Final on Saturday against Leicester City

The Seagulls knew if they could grab a win over Everton at The Amex they would open up a nine-point gap to third-bottom Fulham and with eight games to go and a game in hand almost certainly be well on their way to Premier League safety.

They welcome an Everton side who had not won in three games a well so could they take advantage of this recent form? The Toffees still have hopes of European football next season and if they could end that winless run would be just five points off fourth place with a game in hand, so all is not yet lost for the visitors. No Dom Calvert-Lewin though for the visitors, which was a blow, he joins an ever-increasing injury list at the club, nine senior players out right now.

The first half didn’t have too much in the way of clear-cut chances, Brighton’s best chance fell to Neal Maupay but he saw an effort blocked wide of the near post by Yerry Mina, whilst Tom Davies had Everton’s best opening but sent a header wide of the far post, and the most spectacular effort came from the hosts through Yves Bissouma after he sent an acrobatic overhead kick onto the roof of the net. However, it wasn’t the best halves of football and it was no surprise both sides went into the break goalless. A slow burner you might say…

Could anyone spark this game into life? Well, the hosts dominated the second half and played some nice football as per usual, but they had no end product which has been their problem for most of the season and try as they might they could not find a way through.

Everton were just trying to do their best to stay in the game and hang on, they had limited resources to turn to on the bench, five of the seven substitutes had no premier league experience, but one of those subs who did have experience, Alex Iwobi, almost stole all three points right at the death when he fired over, but it would have been harsh on the hosts if that had gone in.

A point apiece then at The Amex, not the best of games if truth be told… 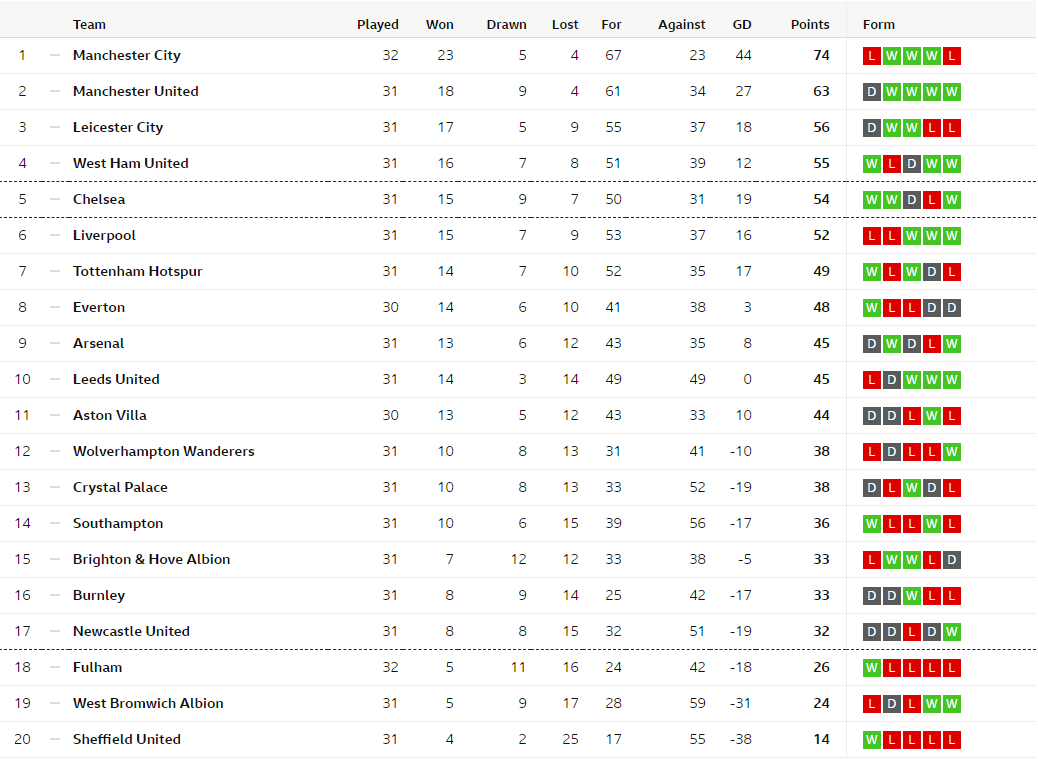 Manchester City’s lead has been cut to eleven points after their shock home defeat to Leeds United and Manchester United’s win against Spurs, United do have a game in hand too so could reduce that to eight points, but it is still City’s title to lose still.

The race for the top four is becoming very interesting after West Ham’s win over Leicester City, The Hammers are just a point behind the third-placed Foxes now and there are just four points between Leicester and sixth-placed Liverpool, and with Spurs and Everton still, just about in the touching distance, it’s anyone’s guess who will grab those final two champions league spots now.

Down at the bottom and Sheffield United are all but down, whilst West Brom still have a slim chance of survival after back-to-back wins, but Newcastle’s win over Burnley was a blow to their chances, Fulham also would have not welcomed that result too, they trail The Magpies by six points now having played a game more. You do feel that anyone above 15th are probably safe now so Brighton, Burnley and Newcastle still need a few more points yet. 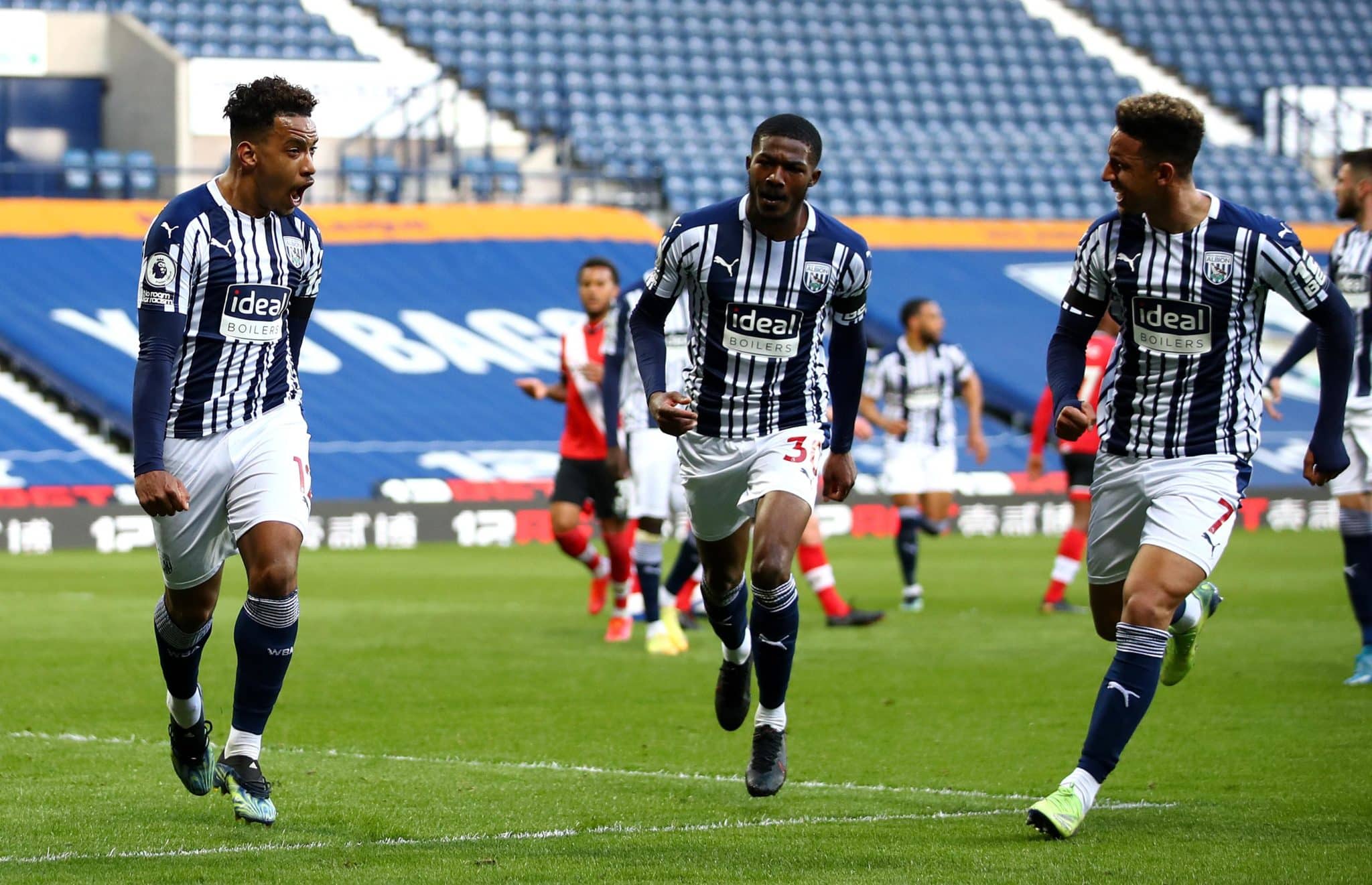