Thursday’s action saw Keith Barker take 6 wickets for Hampshire while Emilio Gay and Marcus Harris would both score centuries on Day 1 of the latest round of County Championship games.

Nottinghamshire would make three changes from their defeat at Warwickshire with Ben Compton, Lyndon James and Brett Hutton recalled while Essex makes one change from their win at Durham with Shane Snater comes in.

The hosts would win the toss and would bat first with Ben Compton dismissed for 11 as he was caught by Sir Alastair Cook off the bowling of Peter Siddle before Ben Duckett followed for 2 LBW to the same bowler. Ben Slater would be LBW to Snater for 25 before a 123-run partnership between Joe Clarke and Lyndon James would be entered with Cook and Siddle combining again to dismiss the latter for 54.

Steven Mullarkey would be caught by Cook off the bowling of Snater for 55 before Tom Moores would be the last wicket of the day as he was bowled by Sam Cook for 12 – Clarke (57) and Liam Patterson-White (17) the not out batsmen at close.

Warwickshire was unchanged from their win at home to Nottinghamshire while Derbyshire made 3 changes from their innings defeat at Worcestershire with Luis Reece, Anuj Dal and Michael Cohen coming in.

The visitors won the toss and elected to field with Will Rhodes the first man out as he was caught by Billy Godleman off the bowling of Sam Conners before the same bowler would bowl Pieter Malan without scoring.

Rob Yates would be third man out as he was caught by Wayne Madsen off Conners for 37 before he’d get his fourth wicket of the day as Matt Lamb would be caught by Luis Reece for 7.

Liam Norwell would be last man out for the day as he was caught and bowled by Reece with Craig Miles (15) and Oliver Hannon-Dalby (0) not out at the end of play.

Worcestershire made 2 changes from their innings win against Derbyshire last week with Gareth Roderick and Josh Tongue coming in while Durham would be unchanged from their home defeat against Essex last week.

Durham won the toss and elected to field and they were rewarded with some quick wickets as Jake Libby would be caught by Alex Lees off the bowling of Brydon Carse for 13 before Tom Fell would be LBW to Matty Potts for 1. Gareth Roderick was out for a 3-ball duck to Potts before Daryl Mitchell would be LBW to Carse for 6 – they went from 19/0 to 20/4 in just 10 balls.

Josh Tongue would be LBW to Raine before Dillon Pennington would be caught by Borthwick off the bowling of Potts – Potts and Carse taking 4 wickets each with Brett D’Oliviera the not out batsmen with 39.

Borthwick would be next man out for 42 as he was caught by Barnard off Tongue before Potts was caught behind for a second-ball duck – Michael Jones (12) and David Bedingham (6) the not out batsmen.

Leicestershire made 3 changes from their draw at Hampshire a fortnight ago as Ben Mike, Callum Parkinson and Will Davis came in while Gloucestershire made 2 changes in their innings defeat at Surrey last week as Glenn Phillips and Josh Shaw come in.

Leicestershire won the toss and elected to bat and they would lose Hassan Azad for 4 as he was caught by Smith off the bowling of Payne before fellow opener Sam Evans who was caught by Lace off the bowling of Phillips for 27. A 160-run third-wicket partnership between Marcus Harris and Colin Ackermann was ended as the latter was bowled by Hammond before Harris was LBW to Phillips as the Australian was dismissed for 148.

Lewis Hill was the last man out for the day as he was bowled by Worrall for 56 with Harry Swindells and Ben Mike the unbeaten batsmen on 25 and 2 respectively.

Hampshire would win the toss and elect to field with them getting Eddie Byrom without scoring as he was bowled by Keith Barker before the same bowler would get Tom Abell caught out by Liam Dawson for 8. James Hildreth was caught out by Lewis McManus for 1 before George Bartlett would be LBW for a duck, all dismissed by Barker.

Lewis Goldsworthy was caught by McManus off the bowling of Brad Wheal for 7 – the hosts sitting at 43/5 – before Steven Davies and Tom Banton moved the score to 108 before the latter was bowled by Barker for 45.

Davies would be caught by McManus off the bowling of Barker for 47 before a 171-run partnership between Lewis Gregory and Roelof van der Merwe was ended as the latter was ran out for 88 by Wheal. Gregory would be bowled by Kyle Abbott for 107 before Marchant de Lange would be last man out, caught Organ off Wheal’s bowling, for 17 as Josh Davey was 22 not out.

Glamorgan made 2 changes from their draw at Kent a fortnight ago while Lancashire would be unchanged from their innings victory over Yorkshire last week.

The hosts would win the toss and field first with Keaton Jennings bowled by Michael Hogan for 3 before Luke Wells was LBW to James Weighell for 10. Alex Davies was third man out as he was caught by Andrew Salter off the bowling of Weighell for 21 before Josh Bohannon would be caught behind by Chris Cooke off Michael Neser’s bowling for 14.

Dane Vilas would be was next LBW out to Hogan for 12 before Liam Livingstone was caught by Cooke off the bowling of David Lloyd for 17. Luke Wood and Danny Lamb would both be out LBW to Neser for 28 and 12 respectively before Saqib Mahmood and Tom Bailey both bowled by Dan Douthwaite for 4 and 31 respectively.

Lloyd would be the first man out as he was bowled by Mahmood before Joe Cooke (14) and Billy Root (0) would be bowled and LBW respectively to Bailey in consecutive deliveries. Kiran Carlson would be the next man out as he would also fall LBW to Bailey with Chris Cooke caught by Bohannon off the bowling of Lamb without scoring.

The hosts won the toss and elected to bat with the openers Ricardo Vasconcelos and Gay putting on 135 for the opening partnership before the former was caught by wicket-keeper Ollie Robinson off the bowling of Matt Quinn for 66 with Gay the next man out for 101, also caught by Robinson, off Jack Leaning’s bowling after another century partnership, this time with Luke Procter.

Procter was LBW to Quinn for 81 with Rob Keogh following in the following over for 38 as he was caught by Cox off the bowling of Darren Stevens. Adam Rossington would be the last wicket to fall as he was bowled by Stevens with Saif Zaib (17) and Tom Taylor (19) the unbeaten batsmen at close.

Ali Orr would caught by a substitute off the bowling of Brook for 15 before Travis Head would be caught by Duke off Thompson. Aaron Thomason was the final wicket to fall, caught by Malan off Thompson’s bowling, for 40 with Ben Brown and Danial Ibrahim the not out batsmen on 126 and 37 not out respectively. 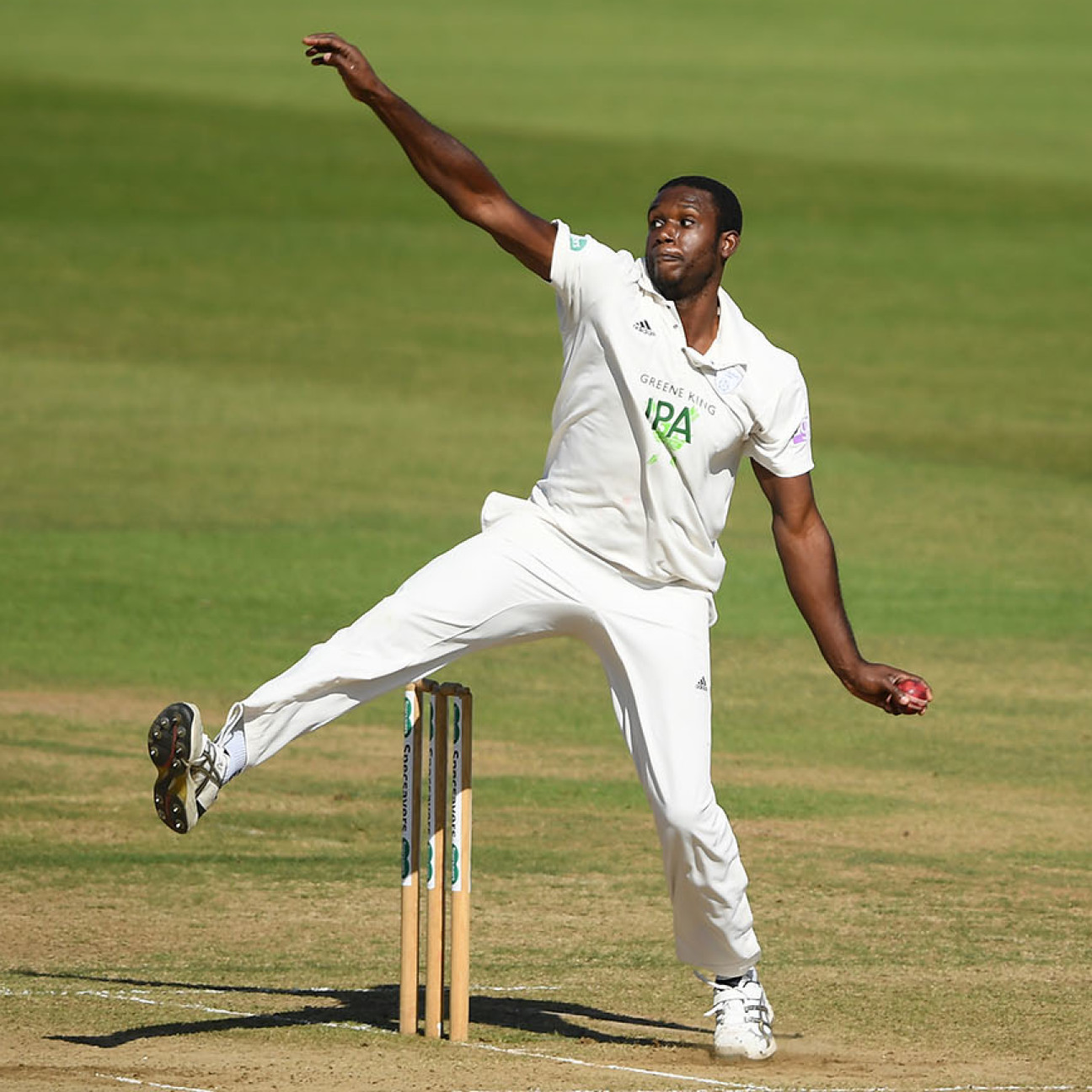