The Semi-Finals of Euro 2020 kicked off at Wembley on Tuesday evening, with Italy and Spain both hungry for a spot in the final come Sunday.

Four changes overall between the two teams from their last matches, against Belgium and Switzerland respectively. The most noticeable changes from both sides were Emerson replacing Spinazzola for Italy, and an omission of Centre Forward Alvaro Morata by Luis Enrique. Spain started the game without a recognised No.9.

Italy dominated the first five minutes, hitting the post before 4 minutes had elapsed. A precise through ball down the left wing by Chelsea’s Emerson found a surging Barella, who took it around Spanish Goalkeeper Unai Simon and tried to curl it over and round the keeper but could only find the post.

This seemed to wake the Spanish from their early doze, subsequently, they controlled the following 15 minutes. Despite controlling, no clear-cut chances for Spain followed, only a number of half-chance and a free-kick.

As 31 minutes rolled around, Italy was yet to register a shot at the Spanish goal; their longest wait for such an event at the championships really epitomised the control of the Spanish midfield over the Italians.

A midfield battled half came to a close with an Italian chance that kissed the crossbar. Insigne drove towards the penalty box and laid off Emerson on the overlapping run, who also drove along the goal line and fired a shot away. Unfortunately for the Spaniard and his teammates, it sailed over Simon in goal and clipped the crossbar on its way. Halftime ended goalless between the Wembley arches.

The second half began with great chances at both ends. Cesar Azpilicueta intercepted and unleashed Oyarzabal down the right-wing, who laid the ball back for midfield veteran Sergio Busquets for a chance at goal. The first-time strike however was powered over the bar.

8 minutes later came the Italian chance, on a quick counterattack. Keeper Donnarumma played the ball downfield, Laporte slid in to prevent the ball from advancing, however, his last-ditch tackle could only end up finding the feet of Chiesa, who curled the ball magnificently round Simon and into the right-hand side of the goal. Italy led at Wembley.

Immediately after the goal, Morata was introduced to the game for Ferran Torres as the Spanish became desperate for an equaliser. Just 5 minutes on from the goal, Koke intercepted a clearance from Beradi and guided a cross towards a delayed running Oyarzabal, who missed the ball entirely.

A huge opportunity missed for the side in white from what looked like a certain equaliser.

With 10 minutes to play, Morata came deep to receive a pass from Laporte, from there he played the ball to Olmo whilst sprinting down the middle of the pitch. Olmo threaded through Morata one on one with Donnarumma who slotted the ball into the bottom left-hand corner, sending the Italian keeper the wrong way. An equaliser for the Spanish. 1-1.

This goal caused a chaotic, open finish to the 90 minutes. Both sides with counterattacks, yet neither country could capitalize on spells in possession. After 90+3 minutes, a further 30 minutes of extra time was required to separate the teams.

A cagey opening few minutes of extra time finally produced an opening. Olmo won a freekick on the left wing following a clumsy challenge with the arm by Toloi. The freekick was a low, powerful one into the path of Donnarumma, who could only palm it into a sea of bodies. Morata finally took authority, collected the ball, shot, but the ball bounced between players of both sides and fizzled out for a goal kick.

The rest of the first half of ET was all Spain, with opportunities coming by way of a Llorente cross, and Olmo driving and trying to play Morata through; the pass had too much weight on it however a rolled through to Donnarumma.

On 110’ minutes, after a spell of getting back into the match, Chiellini sent a ball over the top, which found Beradi. He brought the ball down with his first touch, beat Simon to the ball and slid and fired a shot at goal, powering it into the back of the net. Celebrations were absent however as the offside flag is immediately raised. A let-off for Spain and devastation for Italy. 10 minutes of extra time remained.

Jorginho played a long ball forward toward Belotti, who, to his right, had Bernardeschi driving forward, but the through pass clipped the back of Laporte’s foot. That was the last real chance for either side in extra time.

Italy was awarded the first penalty, Locatelli to take but was saved! Unai Simon dove to his right and dove the right way. Nightmare start for Italy in the shootout.

However. Dani Olmo skied the ball over the bar in an attempt to try and beat the long-armed Donnarumma. 0-0 after 1 penalty apiece.

Belotti stepped up next and scored for Italy, powering it low into the side netting beyond a stretched Simon.

Bonucci for Italy scored going left and Thiago for Spain scored going right. 2-2 in the shootout after three penalties.

Bernardeschi then stepped up and rifled the ball into the top right-hand corner Then however Morata failed to covert his penalty for Spain! The Spanish striker takes a poor, weak penalty and is easily covered by Donnarumma. Italy led 3-2.

Jorghino was to take the final penalty for Italy, to send the Italians into the final. And after a hop, skip and a jump, he calmly slotted the ball into the bottom right-hand corner. He leapt away in celebration, and a sea of Italian players and staff followed and flooded the pitch.

Italy will be a participant in Sundays Euro 2020 final and will play the winner of England vs Denmark on Wednesday.

Spain however can hold their heads high. They weren’t expected to be a semi-final team at this tournament, and in a generation of the rebuild, the Spanish can go home disappointed about what could have been, yet not dissatisfied about their campaign as a whole. 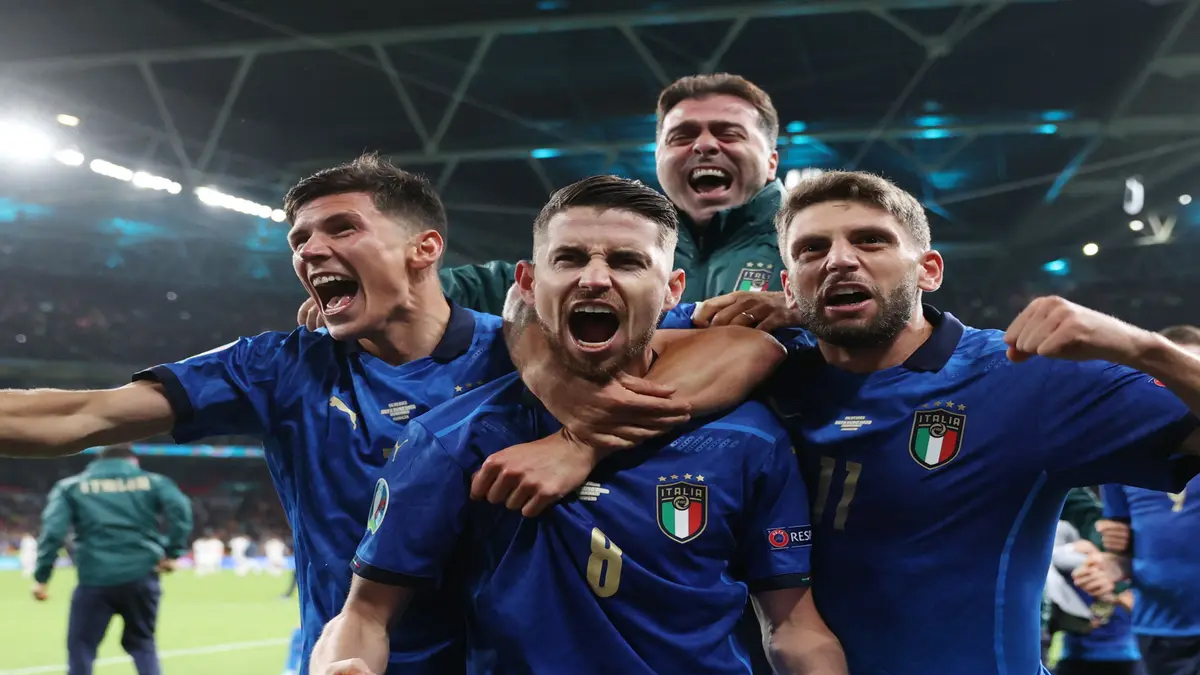