“Due to various uncertainties surrounding my position as it relates to the team’s new ownership, I’ve decided to resign as head coach of the New York Jets.” And with those words written on a napkin, and the most surreal press conference in the history of the NFL at the time. Bills time in NY was over as quickly as it started. In a short 24 hours Bill goes from the coach of the Jets to not having a Job, but what would of happened if Belichick stayed in New York, would he lead the Jets to their super bowl since Joe Namath?

Would the patriots still become arguably the greatest dynasty in sports history? And 4 months later, what would become of Michigan 3rd string QB, Tom Brady? Just to recall, Belichick took the Job as the successor of his mentor Bill Parcells when he became the teams defensive coordinator in 1997. When Parcells stepped down in early 2000, Belichick took the Spot. Then just a day after taking the job and minutes prior to a huge press conference, Bill decided to step down. Belichick wrote a handwritten letter to Jets owner explaining his reasons.

The coach told the standard whoppers you hear when someone weasels their way out of a commitment in sports: He wanted to spend time with his family. He had an epiphany. He blamed the sour taste of past experiences. It was all lies. The entire time, Belichick was angling for the New England Patriots job, which had become open when Pete Carroll was fired the same day Parcells retired.

The ownership situation was more enticing in Boston, he said, as the Jets were in the process of being sold after the death of team owner Leon Hess. (That part, at least, was true.) Okay, but let’s get back to the question: What happens if the cutoff-sweatshirt wearing, coaching misanthrope doesn’t bail on the Jets? I have a few guesses as to how the dominoes would have fallen.

Though New York held three first-round picks in 2000, the cupboard was pretty bare when Belichick took over for those 24 hours. Curtis Martin was the team’s star and Wayne Chrebet was a workman-like receiver that would have thrived under Belichick. The defense had a strong secondary led by Aaron Glenn and the linebacking corps was impressive (Bryan Cox, Mo Lewis and James Farrior), but soon-to-be defensive stalwarts Shaun Ellis and John Abraham weren’t there yet (they’d be drafted in April). The team would have played under 37-year-old quarterback Vinny Testaverde.

In time, Belichick could have used his assets to build up a team that was Super Bowl worthy. But since he had front-office power, would he have had the abilities to shop for, and cook, the groceries, as his mentor once said?

Belichick does it now, but when he got to New England, Scott Pioli was his general manager. That divide clearly helped New England win three of its first four titles.

It’s also key to remember how close New England was to being a good, but title-less team in the first few years under Belichick. They won their first title in that bizarre 2001 Super Bowl against the heavily-favored Rams when Mike Martz inexplicably stopped going to Marshall Faulk. There was the tuck rule game. And each of the first three Super Bowl wins were aided by clutch kicks from the best player ever at that position, Adam Vinatieri. Does all that happen with New York?

2. Tom Brady would not become the “GOAT” (greatest of all time). If Trent Green doesn’t go down, chances are we never would have heard the name of soon-to-be Hall of Famer Kurt Warner (seriously guys, not putting him in on the first ballot was absurd). If Joe Gibbs doesn’t ride Doug Williams in the 1988 playoffs, Gibbs maybe wins two Super Bowls and Williams becomes a Grambling has-been. And if Drew Bledsoe avoids injury, Tom Brady may never take over for New England. Remember, Bledsoe was only 28 when Brady was drafted. He had taken a team to a Super Bowl but put up mediocre numbers under Pete Carroll, so he wasn’t exactly entrenched in the job, but it was still his until he lost it. It’s impossible to say, what would have happened, of course, which is why these hypotheticals are so fun.

But let’s say New England had replaced Carroll with one of the hot coaching prospects that year — Marty Schottenheimer, Mike Martz, Art Shell, Butch Davis, Gary Kubiak and Al Groh, to name a few. And let’s say the team’s offense wasn’t run by Charlie Weis, who followed Belichick to New England. Would the Patriots have continued to be the fine, if oft-mediocre franchise, that had won three playoff games in 13 years prior to Belichick’s hiring? 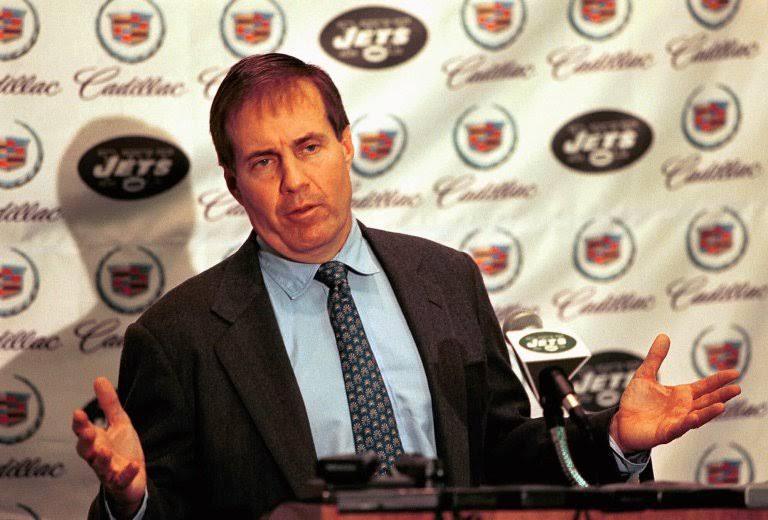