The NBA finally got their season restarted and boy was it a success. Two close knit games between 4 teams that are entertaining to watch with stars going at it for 4 quarters. There were some great performances, but also some stinkers. A lot occurred last night so in case you missed it, here’s a run down of the NBA Tip-Off.

Coming into the 4th quarter the Pelicans held a commanding 87-79 lead with players like Jrue Holiday, and JJ Reddick clicking. The Pelicans held a lead from the start of the 4th all the way until Donovan Mitchell finally clicked and drained a two pointer that gave them the lead. Mitchell would score 8 points in 4 minutes and not miss once, scoring 8/10 points the Jazz scored in the last 4 minutes. While thin win is a good win, the Pelicans definitely were not at full strength. The Pelicans had limited Zion Williamson to only 15 minutes but he did drop 13 points in that shortened span of play. The game ended in a 106-104 victory for the Jazz, and the Pelicans drop a crucial game as they fight to make it to the playoffs

Winners and Losers of the Jazz V. Pelicans Game

There is no bigger loser here than Lonzo Ball in my opinion. In 27 minutes he had a 2-13 performance with 0-4 from 3. He only had 4 points 7 assists and 6 rebounds along with 3 turnovers. While he did have 2 steals, it couldn’t save what was a horrible offensive performance. He shot a whopping 15.4% from the field, which is awful.

Lakers Bench Goes Off to Win Big Against the Clippers

The Lakers depth which was seen as a huge flaw for this team especially without Avery Bradley. Both Dion Waiters and Kyle Kuzma shot 50% from the field and scored double digits. The bigger performer was Kyle Kuzma, who people said “Would you want him taking a big shot?”about him CONSTANTLY, but he was great tonight. He made only threes, shooting 4-7 from beyond the arc. The Lakers were able to get past the poor performance from LeBron who shot 6-19 from the field. He did dish out 7 assists and and grab 11 boards, but he had 5 turnovers. He was not playing well but AD stepped up to beat the Clippers.

For the Clippers, they had started to comeback in the 4th quarter but they just couldn’t cap it off. Paul George hit a game tying three, but after LeBron hit a driving layup, PG13 missed deep to give the Clippers the win. This game was great, but the Lakers walk away with the win to tie the season series.

Winners and Losers of the Clippers V. Lakers Game

The biggest winner is Kyle Kuzma who showed himself to be a great perimeter option in a big game. He took 7 threes out of 8 FG attempts and drained 4 of those threes. With a +12 +/-, he was a huge part of the Lakers win. He also grabbed 7 boards and played 32 minutes. He got all 7 boards on the defensive side of the ball. He had a block and only turned over the ball once against a great defensive team.

By far the biggest loser is Landry Shamet who played 22 minutes, shot 1-8 from the field, 2 points, 2 turnovers, and 3 boards. He also had a whopping -19 +/- and was not the reliable three point option off of the bench. Shooting 0-5 from 3 was concerning for the Clippers as a slow start could give them a tough first round matchup.

The NBA season is off to a bang, and I think this season will do great for the NBA. 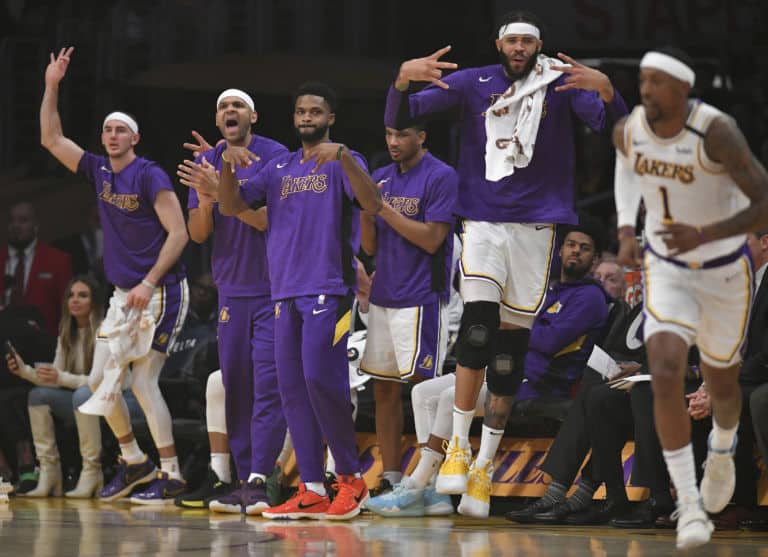