Cricketing fraternity is often left distraught when sporadic showers or bad light cause frustrating interruptions in the matches. But there have been far more weird reasons as far as halts in Cricket are concerned. From the piercing sunlight causing suspension of play to monkeys partying at midwicket to the Cricket ball landing in a blazing fry pan and to bees storming the arena, here are the five most bizarre incidents when Cricket matches were stopped midway. Animals such as monkeys, pigs, and even hedgehogs and snakes are notoriously remembered for causing Cricketing delays.

Bees have been a cause of concern in Cricket games, more than just once. There was a major bees assault in Kandy during a Test match between Sri Lanka and England. Another attack from the said species took place in more recent times when Sri Lanka featured in the Pink ODI in their tour of South Africa. Out of the blue, a swarm of bees invaded the stadium and forced the clueless players as well as the umpires to lay down flat on the bellies to avoid the stinging buzzes. South Africa’s sparkling pink kits must have allured the bees and it was extremely fortunate that no one was injured by the stings. It was not before the fire extinguishers were called that the chaos came to a halt. Bees causing a considerable delay will always remain a one-off.

Monkeys in the field 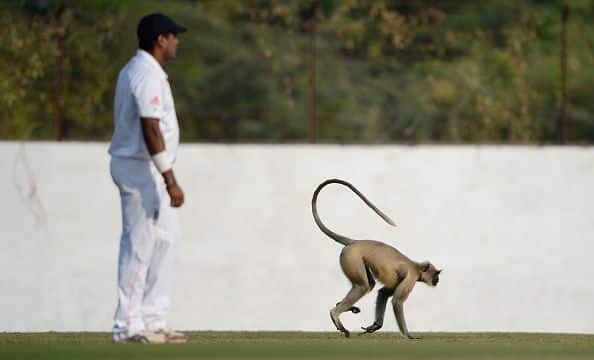 During one of the tour matches in India, England’s fielders were made to wait as they witnessed three Grey Langur monkeys taking up fielding positions and causing an interruption in the play. They must have thought of the Cricket ball to be an exotic fruit and wandered into the ground to get a hold of it. Tourists and bystanders were clearly amused by the pitch invaders after a sluggish day of Test Cricket. A similar incident took place as far back as in 1951 when a monkey gang of Pune decided to make a guest appearance in a Cricket match between England and Maharashtra.

A rare exception to bad-light halts and rain interruptions came when a sparkling sun caused an astonishing delay in an ODI between India and New Zealand at Napier. India had skittled the hosts to a meager 157 and were cruising along at 41-0 when dinner was called. When Shikhar Dhawan took guard against Lockie Ferguson in the 11th over, he complained of the sunrays obscuring his vision directly behind the bowler’s arm. Umpires were quick to react and forced the players off the field to wait for the sun to set completely. The delay was deemed to be a “sun strike” and took a lot of fans by utter surprise.

“The setting sun is directly in the eyes of the batsmen. So, we got to consider the safety of the players, umpires. So, we have decided to suspend play until conditions improve. This is the first time in my 14 years that I have seen something like this happen on a cricket field…” Shaun Haig, the umpire, was fascinated.

Earlier this year during Bangladesh’s tour of South Africa, the first day’s play in the 2nd Test was delayed by 10-15 minutes due to a slight delay in food delivery. Test Cricket was making its highly-awaited return at Bloemfontein and the match is still remembered till date, not because of enthralling drama but because of sluggish food delivery. The caterers assigned to serve ‘Halal’ food to the Bangladeshi team couldn’t turn up on time. Later, it was revealed that a wrongly printed food menu caused the extension in the lunch break as the visitors were adamant on consuming ‘Halal’ food. 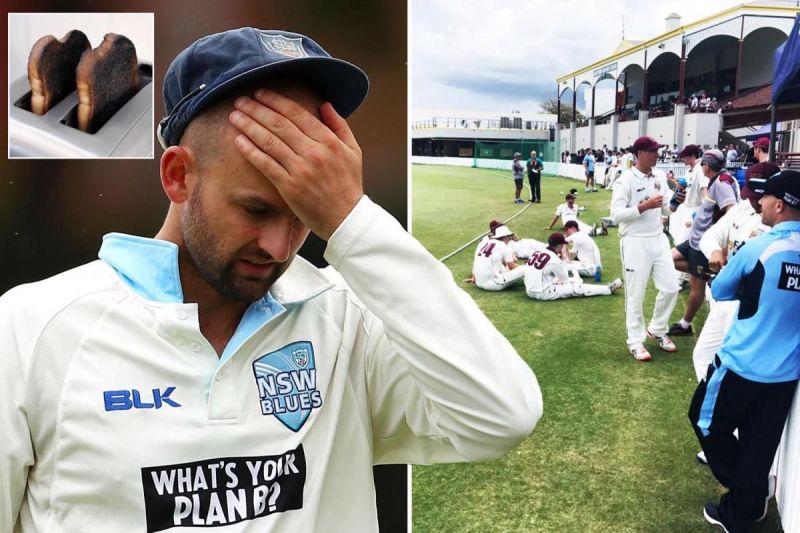 The fascinating tale of burnt food setting off fire-alarms and halting play between Lancashire and Kent in 2007 was revived in the Sheffield Shield, two years ago. New South Wales were closing on a resounding victory against Queensland. Requiring 18 runs, NSW were waltzing along smoothly when play was forcefully stopped as a boisterous fire-alarm rang around the ground. Fire trucks were fetched as a state of anxiety encircled the ground. Little did they know, though, that the alarm was triggered when Australia’s star off-spinner, Nathan Lyon, overcooked his toast. The burnt toast had popped out and the smoke turned on the alarms. Confessing it later, Lyon said: “(The toast) popped up first and I wasn’t happy so I put it back down and I got carried away watching the cricket. There’s a first for everything”