Saturday’s County Championship saw a massive centuries from Ben Duckett and Tom Abell, a second century opening partnership for Surrey while Chris Rushworth and Kyle Abbott to complete 6-fers with the ball.

Resuming at 48/0, Derbyshire would add 23 to their overnight total before Brooke Guest was dismissed for 30 as he was LBW to Rushworth before Leus du Plooy would be caught behind without scoring off Mark Wood the following over. Billy Godleman would be the third wicket in as many overs as he fell to Rushworth, caught by Cameron Bancroft, before a 99-run partnership between Wayne Madsen and Matt Critchley (49) would see the latter caught by Brydon Carse of the bowling of Rushworth. Madsen was next out as he was trapped LBW to Carse for 42 before Harvey Hosein would retire hurt without scoring. Alex Hughes was the sixth man out as he was bowled by Mark Wood for 7 before Ben Aitchison was caught behind by Stuart Poynter for 24 off the bowling of Carse. Fynn Hudson-Prentice (26) and Samuel Connors would be dismissed off consecutive balls from Rushworth while Anuj Dal (Hosein’s concussion substitute) would be the last man out for, LBW to Rushworth (the bowler ending with 6/49 off 19.4 overs).

Durham’s reply would see Alex Lees (1) and Ben Raine (0) both caught out to the bowling of Aitchison with Bancroft and captain Scott Borthwick both unbeaten at the close with 9 and 2 respectively.

Resuming at 16/1, the hosts would move onto 29 before captain Tom Westley would be dismissed, caught behind by Burgess off the bowling of Oliver Hannon-Dalby for 8 before Dan Lawrence would go for 14 as he was bowled by Liam Norwell with the score on 77.

Warwickshire had one over before close with night-watchman Briggs playing out that over without scoring.

Resuming on 51/3, Duckett (177 not out off 196) and Lyndon James (78) would put on 205 before the latter would be caught by Brett D’Oliviera before another century stand with captain Steven Mullaney adding 88 off 73 before he was caught by Ben Cox off the bowling of Josh Tongue with Tom Moores joining Duckett in the middle as the hosts declared on 400/5.

Jake Libby would be the first man out for Worcestershire as he was caught out by Ben Slater off the bowling of Luke Fletcher for 2 before Tom Fell (10) would be caught behind off the bowling with the score on 21. Fletcher would also get the next 3 wickets as Daryl Mitchell, D’Oliviera and Riki Wessels would all be LBW in his 4th over of the innings with the score still on 21 before the final wicket of the day would also fall the same way to the same bowler with Jack Haynes the man dismissed for 14 – Cox and Tongue the not out batsmen with 8 and 7 respectively.

Resuming on 45/1, the visitors would move the score onto 85 before Eddie Byrom would be caught out by Kraigg Brathwaite off the bowling of David Payne for 38 with James Hildreth being bowled by the same bowler for 15 before Daniel Worrall would rip through the middle order. Firstly, he’d get George Bartlett LBW for 5 before having Lewis Goldworthy (2) and Steven Davies caught by James Bracey and Chris Dent respectively in the space of 3 balls.

Craig Overton (15) would be caught by Bracey off the bowling of Ryan Higgins before a 116-run partnership from captain Tom Abell (132 not out) and Lewis Gregory (57) would end with the latter bowled by Matt Taylor – the skipper helping them up to 300 before declaring 8 wickets down.

The Gloucestershire reply would see them lose Chris Dent for a golden duck off the final ball of the opening over as he was caught by Goldworthy off the bowling of Overton before Bracey would be caught behind by opposite number Davies off the bowling of Josh Davey for 1 with Brathwaite (13) and Tom Smith (0) the not out batsmen at stumps.

The only Day 4 of this round-up saw Leicestershire resumed on 28/5, Harry Swindles was the first to go today for 8 with Liam Dawson catching him off the bowling of Kyle Abbott before he was followed by Chris Wright, caught Dawson off the bowling of Mohammad Abbas, for 3.

Gavin Griffiths would be bowled by Abbott for 1 with the score of 47 before Rishi Patel was caught behind by Lewis McManus off the bowling of Abbott for 27. A 30-run final wicket partnership from Ed Barnes and Alex Evans was broken by McManus taking his third catch of the innings, this time off Brad Wheal’s bowling.

Hampshire would forfeit their second innings leaving Leicestershire 150 to win off the final session but they didn’t go after it, Sam Evans the only wicket to fall in the innings as he was LBW to Abbott for 8 as the Foxes managed 26/1 off 17 overs before both teams shook hands.

Resuming on 185/8, the hosts would lose both Reece Topley (0) and Kemar Roach (5), both with the score on 190, LBW to Blake Cullen and caught by Robbie White off the bowling of Tom Helm respectively.

Jack Davies would be the first man out for the visitors with the score of 18 as he was caught behind off the bowling of Roach before fellow opener Sam Robson would fall the same way to the same bowler 3 balls later. Nick Gubbins (1) would be the next man out in the following over as he was LBW to Reece Topley before Peter Handscomb (5) would be bowled by Roach with the score of 27.

White would be the next man out as he would be LBW to Jordan Clark for 9 with Martin Andersson dismissed for 26, caught by Rikki Clarke off the bowling of Topley. Cullen would be the seventh man out as he was bowled by Roach for 12 before Clark would wrap up the innings, firstly having Helm (4) caught by Amla then having John Simpson caught by Ollie Pope for 68 and Tim Murtagh caught by Mark Stoneman for 0.

From there, it was about how many Surrey could add to their first-innings lead with Rory Burns (61) and Stoneman (74) getting their second-century opening partnership of the game as Surrey finished 135 without loss at the close.

Just 6.2 overs were possible on Day 3 of this game as David Lloyd was the only wicket to fall today, LBW to Matthew Quinn for 4, with Billy Root (26) and Kiran Carlson (0) the not out batsman at stumps.

Just 11.2 overs were possible on Day 3 of this game with Keaton Jennings the only man out as he was caught behind by Adam Rossington off the bowling of Gareth Berg for 27 while Alex Davies (45) and Luke Wells (0) the not out batsman at the close of play. 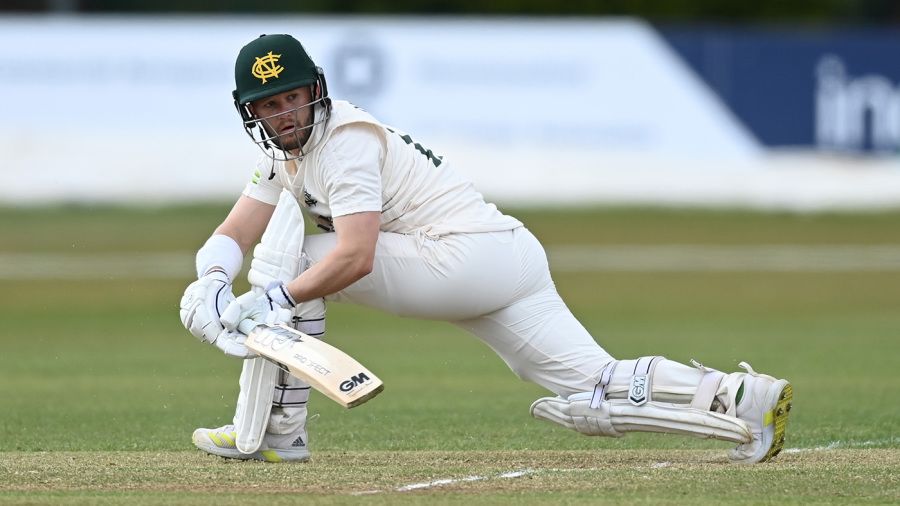