After being bundled out for 191, India’s bowlers made a crucial fightback with bat and ball at the end of day one.

Having won the toss and electing to bowl, Joe Root would have hoped his bowlers would continue their marvellous bowling display from Headingley and bring it to the Kia Oval. To his delight, they did not disappoint.

When the two in-form openers went out to bat, they would have been hoping to get the tourists off to a solid start. Unfortunately, India lost Rohit Sharma in just the ninth over of the match, Chris Woakes making a comeback in the Test side got one to bounce of a length from just outside the off-stump from a good length, Bairstow who was taking the gloves in Buttler’s absence took a simple catch. India losing their first wicket with just 28 runs.

Cheteshwar Pujara joined Rahul in the middle with the Indians in a spot of bother. Rahul who survived a first LBW shout from Robinson at the end of the 12th over survived a second appeal from Robinson. Hawk-eye came to the right-hander’s advantage again as the ball was missing leg stump.

It was third-time lucky for Robinson as Rahul was this time trapped stone-dead in front. Rahul, who went upstairs was unsuccessful as hawk-eye this time came to England’s advantage. The classy opener who played so well in the first to Tests was on his way back to the pavilion for 17 with the score 28-2.

Kohli Picks Up From Headingley

When the Indian captain came to the crease, it seemed as though the half-century that he scored in the second innings at Headingley gave him an extra boost Heading into the Oval. He got off the mark with an exquisite on-drive of Anderson.

While England’s bowlers were probing on that troublesome 4th or 5th stump line, Kohli was resilient enough to not poke at those deliveries.

England soon dislodged the wall of India, Anderson yet again finding the edge of Pujara’s bat and India was teetering at 39-3.

With Rahane struggling to find any kind of form, India promoted Ravindra Jadeja to number five. He and Kohli managed to steer the tourists to 54-3 at Lunch.

Kohli then got a life on 22, where Woakes had him nicking off on that troublesome 5/6th stump line. Fortunately to his relief, the England captain was unable to hold on at first slip.

Root this time was able to grab hold of a catch when Jadeja played away from his body got an outside edge from Woakes. The decision to promote the left-handed all-rounder backfired as he was sent back to the pavilion for 10 runs.

India’s vice-captain, who was pushed down to number six, walked out to bat with India wilting at 69-4. He was given out lbw on 1 of his third ball but survived on DRS. Kohli at the other end was looking confident with a couple of flowing drives.

Kohli who was looking solid as ever soon brought up his fifty, but sadly he was unable to continue as he was gone soon after. Ollie Robinson proving to be his nemesis yet again as he got the Indian captain knicking of to Bairstow while he was attempting to work a ball from just outside off stump. England was on top with India on 105-5.

After playing one exquisite cover drive, Rahane was the next man to go for 14. Craig Overton enticing a false drive from India’s Vice-captain took the edge. Moeen Ali taking a sharp catch at third slip.

When Rishabh Pant came to the crease, it was a rather strange innings from him. He started off playing normally and putting away his ego, but as soon a Rahane got out, he started to get a bit too flamboyant, and that proved to be his downfall as he ran down the wicket after smacking Woakes four and went for one shot too many as he miscued a heave to mid-wicket Ali at mid-off leaving the score at 127-7.

As they say, there is a thin line between being aggressive and reckless, and that was more on the reckless side from the swashbuckling keeper-batsman.

India’s decision to play Shardul Thakur instead of Ishant Sharma definitely paid off as the feisty all-rounder scored a quick-fire 57 off 36 balls. It may have been a swift innings from Thakur, but it was enough to make Root and his bowlers think. His innings finally ended with India 190-7 he was out lbw attempting whilst attempting a lofted shot down the ground. India was then bowled out for a mediocre first innings score of 191.

With only 191 runs on the board, the Indians knew they had to strike early with the new ball. Strangely, Kohli gave Umesh Yadav the first over ahead of Bumrah, but that did not prove to be costly as the leader of the pack struck in his second over. Rory Burns inside edging one onto his stumps was gone for just five runs with the score exactly 5-1.

England then lost Haseeb Hameed who was attempting to guide a shot and wide ball from Bumrah over the slips. the Notts opener could only manage to guide it to keeper Pant who took a good high catch. Hameed was gone for an 11-ball duck with the score at 6-2.

The England captain again looked in fine touch in the middle and it was at this stage, particularly for those India fans that once again he was going to torment Kohli and his bowlers, but credit to India for picking a different bowler. Umesh Yadav, who got his line and length spot-on, nipped one back onto Root’s off-stump and castled him through the gate. How important will this moment be in terms of the outcome of this match? 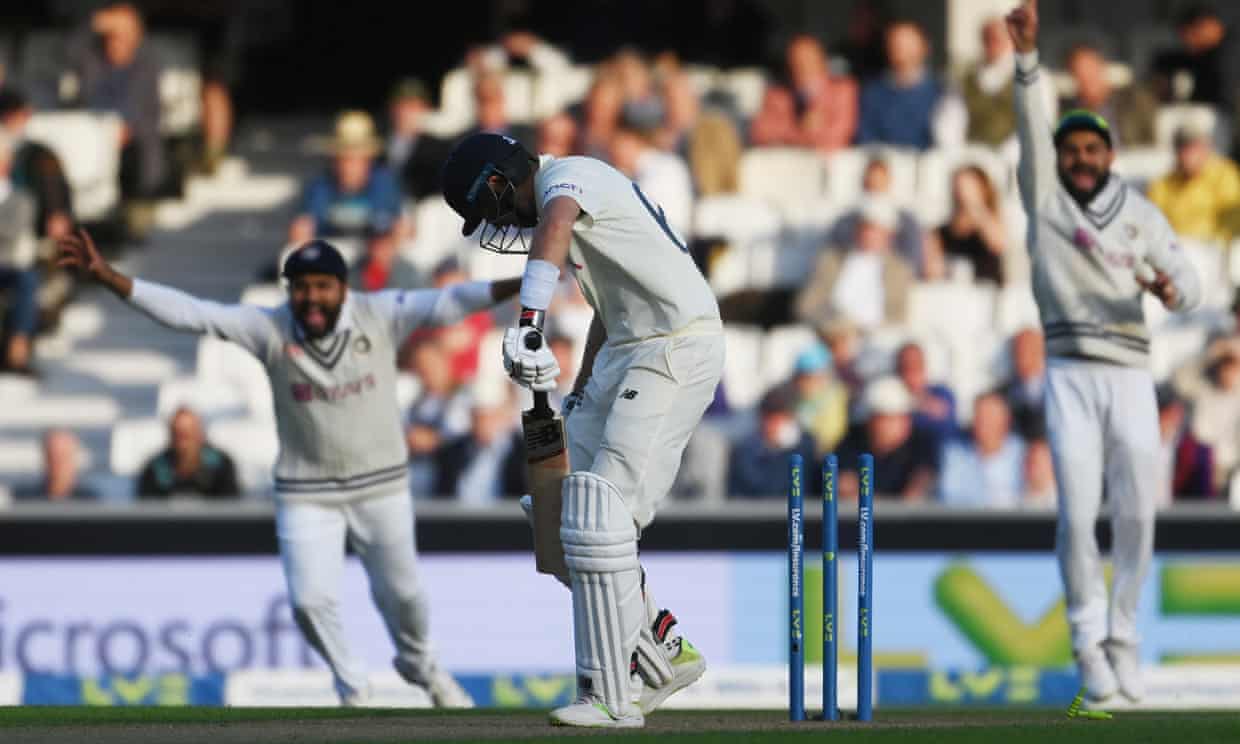