It is very rare that a fighter, after his first fight from a long layoff gets a title shot. Brian Ortega has proved that he is the next challenger for Alexander Volkanovski. He has earned his title shot by beating the Korean zombie, 50-45 (all three judges), in a spectacular display of his new stand up skills.

Coming into the fight it was thought that the only way for Brian Ortega to win the fight was on the ground of his back looking for a submission. Instead, it was 25 minutes of stand up with both fighters exchanging strikes.

Unlike what the scorecard suggests the Korean Zombie fought quite well and hung in for all five rounds but it was Ortega who in all rounds starting from the first till fifth did something or the other, be it a knockdown or a takedown that won him all of the five rounds.

Brian Ortega coming off the most brutal and only loss of his career, from the GOAT Max Holloway was out for almost 2 years having last fought in 2018. After the loss, he had suffered from a few injuries and had completely changed his camp and seemed that he would be changing weight classes too. The Zombie fight was supposed to take place last year but unfortunately, due to injuries, it could not happen.

When it did happen we saw Brian Ortega as we have never seen him before, he was throwing spinning elbows and was perfectly using his jab from the southpaw stance. He had completely revamped his stand up game.

UFC‘s Dana White, before the fight, had announced that the winner would get a title shot against the champion Alexander Volkanovski –  who is coming off a very controversial win against the former champ and the only guy to beat Brian Ortega, Max Holloway. The champion now has a challenger and a direction to move forward.

Brian Ortega posses a different set of challenges for the champ, his stand up has evolved to an elite level – but the strength of Ortega lies with his Jiu-Jitsu and submitting people off his back.

Brian Ortega says he personally does not like offensive wrestling, but he did take down the Zombie 3 times in the fight, so wrestling is always a treat when it comes to Ortega.

Volkanovski Vs Ortega is a really interesting fight and should be a main event at the February pay per view. With the Australian holding on the belt, for now, it is too be seen if Brian Ortega can bring the belt back to the US and Mexico. 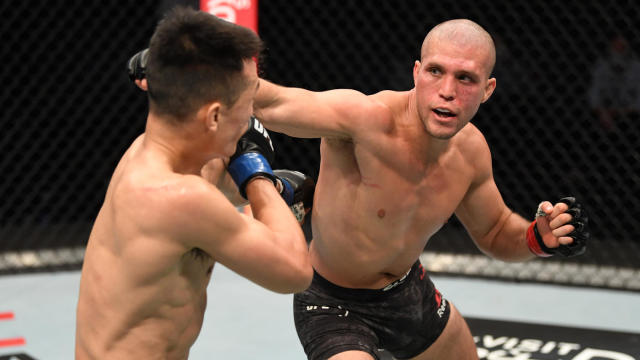