Narratives in sport are often more unpredictable than the weather itself. At the start of the season, Moyes was being touted as one of the managers on the brink. Six games into the season, the Scotsman’s tactics and experience are helping him outmanoeuvre more illustrious opponents. David Moyes, though had his defence to thank as the Hammers produced a lesson in defending to restrict their more illustrious opponents.

After a dramatic equaliser last time around, West Ham United had hoped that they would be able to carry that sort of momentum into this game. City has generally made light of their opponents at the London Stadium having scored 22 goals in their last 5 visits. And “shape” was the word on the lips of the Scotsman as his team looked to nullify the attacking riches of City.

The biggest surprise from City came in the form of no change to their starting eleven. One would have to go back 172 games, for that was the last time Pep named an unchanged side. The retention of the playing personnel though didn’t produce the desired fluency for City as they laboured to create any clear cut openings.

Antonio Hammers in a brilliant goal

With both teams looking to keep their shape, there was hardly anything of note in the opening fifteen minutes. And then out of nowhere, as the ball seemed to be heading out, the Hammers managed to keep the ball in play. The Czech mid-fielder, Soucek,  kept the ball in before Boufal crossed in from the right. Antonio, then produced a wonderful overhead kick to put the ball past Ederson. Having held off Dias, the most expensive defender in this City line-up, it was a moment of genuine quality.

Although there was a suspicion of handball by Soucek, VAR and the on-field referee ruled that there was no obvious foul. Soucek, when asked at the end of the game about the handball denied any knowledge of his action and instead chose to concentrate on the goal.

The referee Anthony Taylor, soon invited the Scotsman’s ire as he failed to book Gundogan for a blatant foul on Declan Rice. Another contentious decision came and went as Antonio almost earned a penalty for his team. There was no word though on his earpiece and the play carried on as usual. If last week was all about Moyes’s little jig, then this time it was about the manner in which he entered into a discussion with the fourth official.

Having failed to see any notable contribution by Aguero, Pep decided he had seen enough as he introduced Phil Foden at the half time break. And the young Englishman was on the score sheet soon enough, after a Mahrez cross found him in the box. The Englishman swivelled in the box to plant a shot past Fabianski at his near post.

The match had taken a turn and City soon settled into their rhythmic passing and domination of possession as they looked to unpick the Hammers defence. The Hammers though on their part held firm and kept on looking to make the most of their limited possession. Injury to Antonio in the buildup to the equaliser had deprived the Hammers of a willing runner. And this kind of stuttered the Hammers fluency.

With 20 minutes left in the game, both teams introduced attacking substitutes as City brought on De Bruyne, while West Ham introduced Haller. The Belgian brought on to unlock the stubborn Hammers defence did produce moments of quality but City was unable to capitalize. Masuaku for Hammers was taking unnecessary risks by dwelling too long on the ball and Sterling almost made them pay in the 85th minute.

Another mistake a couple of minutes later almost led to Sterling being put through on goal but the result was the same as Guardiola took off his jacket in exasperation. The combination of Ogbonna and Yarmolenko had managed to smother the threat.  There was still time for Mahrez to get in a shot which Fabianski did well to keep out.

A 1-1 draw was a deserved result with both teams doing just enough to earn themselves a point. Both teams though now are on 8 points from their first 5 games. City next play Sheffield United at Bramall Lane, while Moyes will travel to old foes, Liverpool. 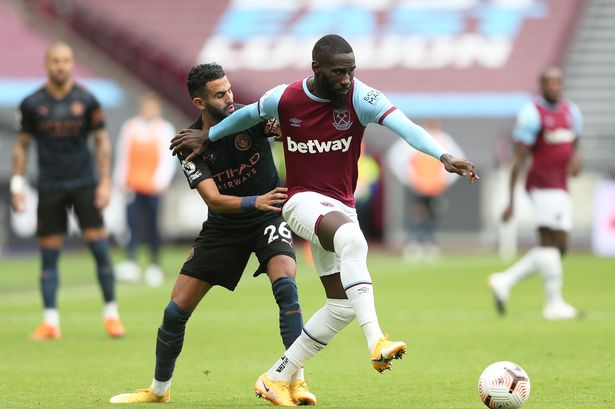