The Return of Portugal – A Country with Curious F1 Stats

The Formula 1 2020 season has been unique in some ways. The intensity of doubleheaders at the same venue and having the opening eleven races in barely three months has quickly made up for the agonisingly long wait during the height of the pandemic. In other ways, it has been a case of normal service resumed; Mercedes continuing their domination of the sport has given us a sense of normality.

As for the racing in general, it’s rarely been dull with such a tight midfield battle for third place in the constructor’s championship, though I doubt any race so far this year will be revered in the future as a classic. It, therefore, seems quite fitting that the second debutant circuit in the unusual calendar should be in Portugal.

Estoril, the third different circuit used for Formula 1 in Portugal, was a regular on the calendar when I first followed the sport as a child. Thanks in part to its positioning on the schedule – it was regularly one of the last four races – there tended to be a notable dramatic moment. Yet if I were to reel off a list of my favourite Grands Prix, it would be tough to include a Portuguese entry. Just like the 2020 season, Portugal produced fun and interest, if not epics.

The inaugural race at Estoril was the 1984 title decider, won by Alain Prost. With this victory, Prost equalled a 21-year-old record of winning seven races in the same season. But unlike Jimmy Clark in 1963, curiously Prost did not take his maiden championship that year.

Instead, he lost out by half a point to his McLaren team-mate, Niki Lauda, who finished the race second. This gave Lauda a third title, seven years after his second. No driver has ever gone longer between world titles; no world championship has ever finished closer.

Prost would take seven wins again in the 1988 season. Once again, he would not be champion that year. One of those wins occurred at Estoril. His bitter rivalry with team-mate Ayrton Senna was heating up by this point.

When Prost tried to pass Senna on the first lap, the Brazilian attempted to squeeze him into a wall. Fighting fire with fire, Prost aggressively opted to steer back towards his opponent, forcing Senna back across the track. Prost was through and on his way to race victory.

Come the end of the season, Senna had broken the record by winning eight races in the year. The points system in place at the time only counted 11 of the drivers’ 16 results, meaning that Senna beat Prost to the championship despite scoring fewer points! Interestingly, Senna had taken his maiden victory in Portugal, for Lotus in 1985.

One of my favourite F1 stats of all regards the winners of Portuguese races in the 1990s: Williams very nearly won six on the trot, but with six different drivers!

Portugal 1991 was possibly the best performance of Ricardo Patrese’s long career. He qualified on pole ahead of the title challengers, Senna and Mansell. Mansell got up to second at the start and seemed unable to challenge his team-mate, but Patrese eventually yielded to him.

Disaster struck when a tyre was fitted wrongly on Mansell’s car during a routine pit stop. The mechanics rushed out of the pit box and changed the tyre again in an illegal position, resulting in disqualification from the race.

For Mansell, the title challenge was effectively over. It was also the second time he had been excluded from Portugal, having reversed in the pit-lane when driving for Ferrari two years earlier! Patrese went on to a commanding victory, the fifth of his six in total.

A year later, Mansell had already wrapped up the championship after dominating the first half of the season. With Senna and Prost warring off the track over a Williams seat for the following year, Mansell had announced his retirement from the sport. In Portugal, he broke Senna’s record by taking a ninth victory of 1992.

It also appeared to be the last win, and finish, of his career: his engine failed in Japan after he had given up the lead to Patrese, then he was taken out in a collision with Senna in Australia. He did, however, return for a brief stint and win once more in 1994.

Prost was the man smiling when the Williams game of musical chairs came to an end, partnering near rookie Damon Hill and easing to a fourth title in 1993. But when the game restarted, he was the one announcing his retirement as the sport reached Portugal.

Meanwhile, his long term rival and successor, Ayrton Senna, entered his third from last race with McLaren with a new team-mate. Mika Hakkinen replaced the underperforming Michael Andretti and sensationally out-qualified Senna on his debut for the team!

Jean Alesi was also keen for a maiden career win, leading the early laps in his Ferrari, but when the race settled down, it was another young gun heading the field and en route to victory: Michael Schumacher. 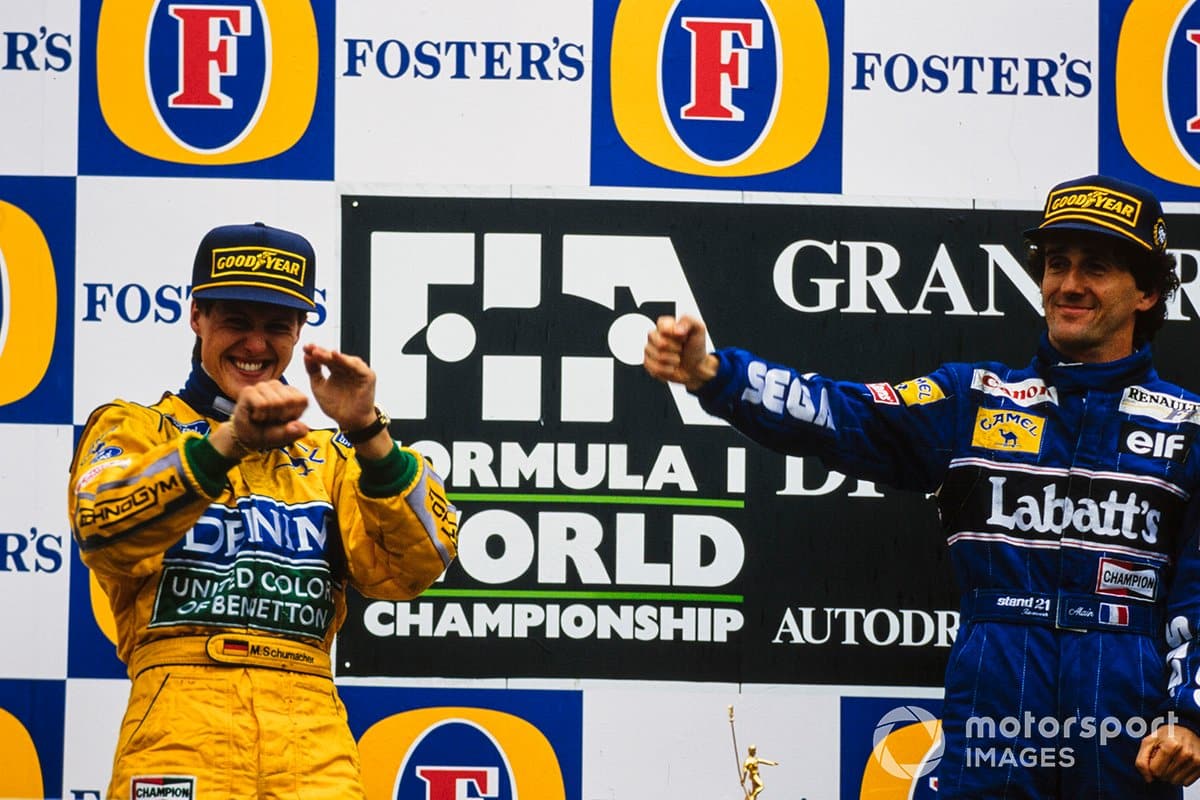 Michael Schumacher impressively held off Prost’s challenge for over half the race, taking the second win of his career in a Benetton. Second place was enough to secure Prost’s fourth and final title. Looking back now, there was an element of a changing of the guard here.

Williams won again here in 1994, this time with Damon Hill being the title challenger. Schumacher was serving a ban for ignoring a black flag at Silverstone, but Hill required an error from his team-mate, David Coulthard, to get into the lead.

The win moved Hill to within one point of Schumacher, while Coulthard scored his maiden F1 podium. A year later, Coulthard went one better by winning for the first time.

The final race at Estoril occurred in 1996. Hill led the championship from Jacques Villeneuve by thirteen points as they entered the penultimate race. In those days, a race win was rewarded with ten points, rather than the twenty-five we have now. For a while, it looked as if the title would be sealed in Portugal for the first time since Estoril’s inaugural race in 1984, which would have been a neat bit of symmetry.

This race is best remembered for a stunning overtaking move by Villeneuve, going round the outside of Schumacher for second place, before jumping Hill in the final set of fuel stops and becoming the fifth Williams driver in six years to win in Portugal.

After an absence of nearly a quarter of a century, Formula 1 returns to Portugal this weekend at a new circuit. Had it been one round earlier in the calendar, it would have been the event where Kimi Raikkonen became the most experienced driver in Formula 1 history – a record once held by the 1991 winner, Ricardo Patrese.

While most of all I hope for a great race, it’s possible that it will be quiet but legendary! If Lewis Hamilton takes the chequered flag, he will become the driver with the most wins in Formula 1 history – a record held at one stage by Jim Clark… at another stage by Alain Prost… for the last 19 years, it has been held by Michael Schumacher. Let the curious Portuguese stats resume! 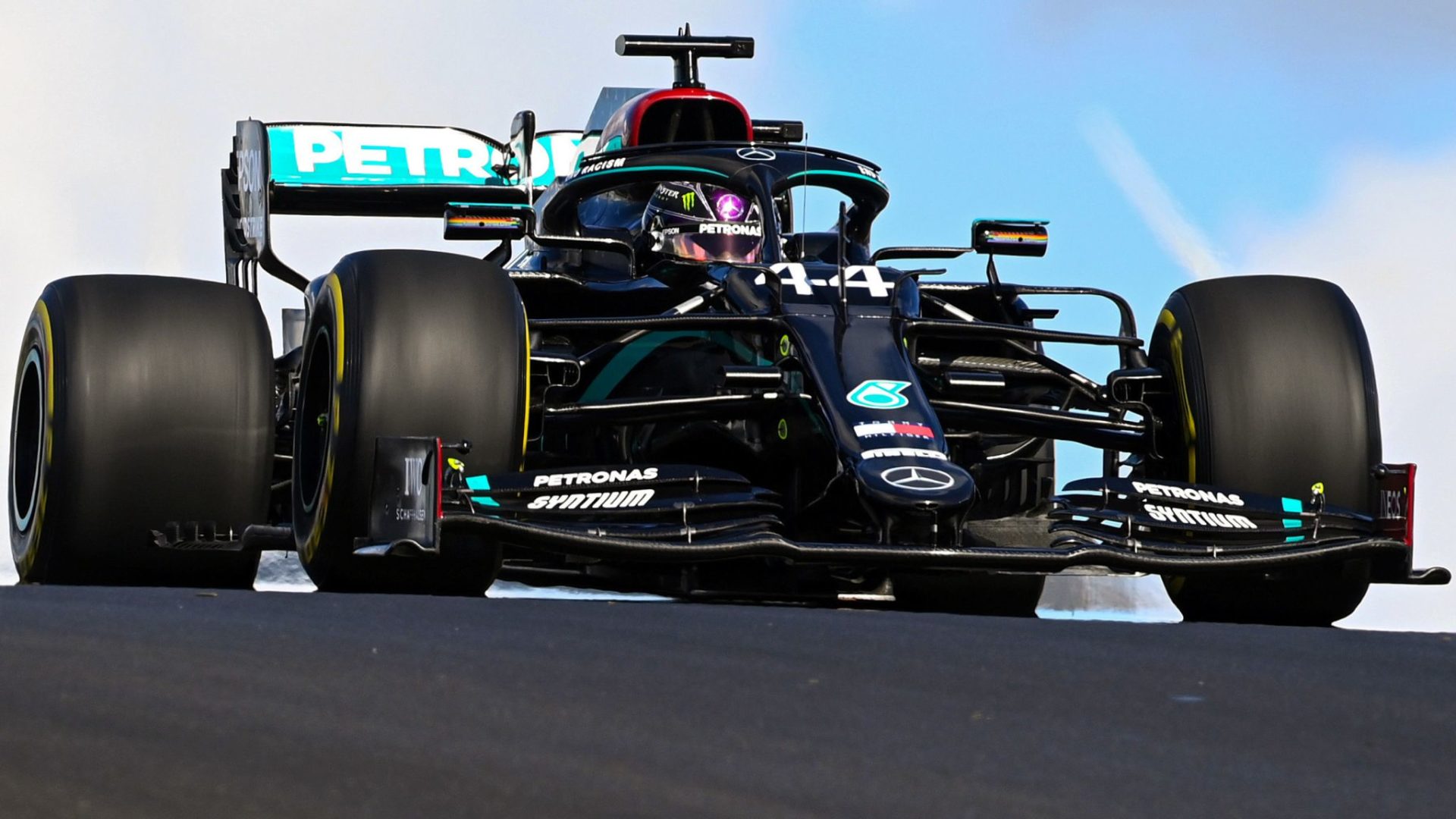