Former NFL wide receiver Demaryius Thomas has died at the age of 33.

‘Preliminary information is that his death stems from a medical issue, and our investigators currently have no reason to believe otherwise,’ Lupo said in a statement

LaTonya Bonseigneur, a first cousin who grew up with Thomas, said that the family believes he died from a seizure.

“He had been suffering from seizures for over a year, and we believe he had a seizure when he was showering,” Bonseigneur said early Friday. “We’re not sure when he died. We just spoke with him yesterday.”

Thomas played 9 seasons with the Denver Broncos after being selected with the 22nd pick in the 2010 NFL Draft.

Thomas had five consecutive 1,000-yard seasons in Denver from 2012-2016. He was a key receiver during Peyton Manning’s years with the Broncos, and was on the winning side of Super Bowl 50 when the Broncos defeated the Carolina Panthers. In 2014, he had career highs of 111 catches and 1,694 receiving yards. Over the course of his career, Thomas caught 724 passes for 9,763 yards and 63 touchdowns.

ALSO READ:  Patriots only pass 3 times in a 14-10 win over the Buffalo Bills!

After leaving the Broncos at the end of the 2017 season, he would play two more seasons with the Houston Texans and New York Jets before announcing his retirement in June 2021.

“It was a tough decision, a real tough decision,” Thomas said at the time. “Always as a kid or always when I did something, it was always [giving] my best to go and go and go. And football was my go. Every year I tried to get better and better, and I knew I was aging, of course. It was something tough, but I’m grateful I did 10, 11 years. I’m so grateful for that and now I can move on. I’m happy, I’m healthy. And now I can try to find my next itch.”

We are devastated and completely heartbroken.

Demaryius’ humility, warmth, kindness and infectious smile will always be remembered by those who knew him and loved him. pic.twitter.com/0GLZIr6UP3

“We are devastated and completely heartbroken,” a statement from the Broncos read, in part. “Demaryius’ humility, warmth, kindness and infectious smile will always be remembered by those who knew him and loved him.”

“DT was beloved by our entire organisation, his team-mates, coaches, and our fans,” said the Broncos

“We are devastated and completely heartbroken by the sudden, tragic passing.

“During nine seasons in Denver, Demaryius established himself as a dominant, record-setting wide receiver who was an instrumental part of two championship runs and our victory in Super Bowl 50.

“His legacy as a Bronco extended far beyond the playing field as a caring, generous member of our community.

“DT loved giving back — especially spending time with children — and impacted countless lives through the Broncos Boys and Girls Club, hospital visits, his annual football camp and many other genuine interactions. Demaryius’ humility, warmth, kindness and infectious smile will always be remembered by those who knew him and loved him.”

Thomas earned four Pro Bowls in a Broncos uniform and played in two Super Bowls, setting a Super Bowl record with 13 catches in a 43-8 loss to Seattle in Super Bowl 48.

Seattle Seahawks quarter-back Russell Wilson tweeted Thomas was a “young legend”, while the NFL said his death was a “tragic loss”.

During the reception of the Broncos’ Super Bowl 50 win at the White House in June 2016, Thomas personally delivered a letter to Barack Obama, asking the former president to pardon his grandmother from a lengthy prison sentence charges related to a crack cocaine bust in the 1990s.

Two months later, Obama agreed to commute Minnie Pearl Thomas’ sentence, who had been in jail for 16 years. Prior to that, Obama had commuted the sentence of Thomas’ mom, Katina Smith, who was jailed for 20 years.

DeMarcus Ware, a teammate of Thomas’ for three seasons, posted a photo of Thomas and himself Thursday night captioned simply “heartbroken.”

He will be missed. 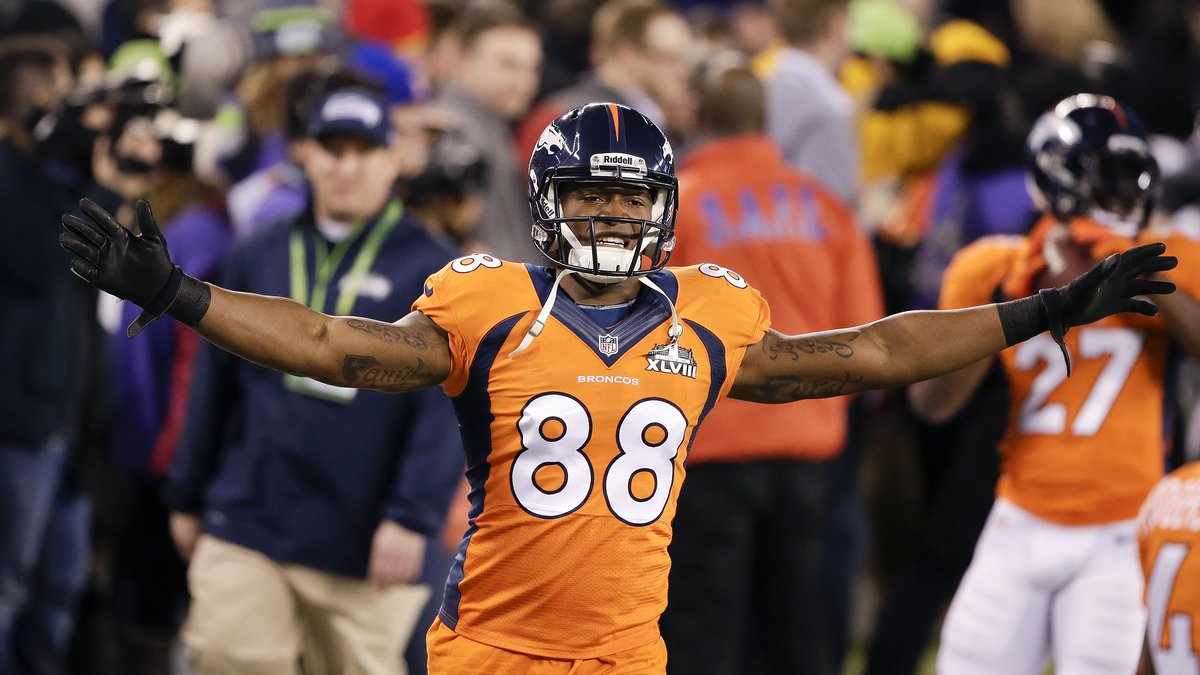