Carl Edwards took the lead with 18 laps to go deciding to take a late pit stop and made it over 60 laps on his last tank of gas. Edwards, Greg Biffle and Dale Earnhardt Jr. finished 1-2-3 by making their gas last for the final 60 laps.

Edwards becomes the ninth different driver to win a race in 2015. The win gave JGR a Charlotte sweep, Denny Hamlin won the All-Star Race on May 16.

Denny Hamlin was leading the Coca-Cola 600 when he had to pit under green with 37 laps to go due to a loose wheel.Kyle Busch, in his first full race since returning from a broken right leg and fractured left foot, finished 11th

On lap 88, Jimmie Johnson lost control of his car and spun out in Turn 4. He didn’t have any damage, but lost track position and had to restart 31st.

“We have nothing to lose so we’re trying to be as aggressive as we can on pit calls and strategy,” Johnson said while his team repaired his car in the garage.

“We just spun — again. … My car was fine in clean air, but it was so wicked in dirty air and traffic. We saw that at Kansas and the All-Star Race, I don’t know if it’s just me or other cars too.”

NASCAR moves next to Delaware for the Fedex 400 Benefiting Autism Speaks on Sunday, May 31. 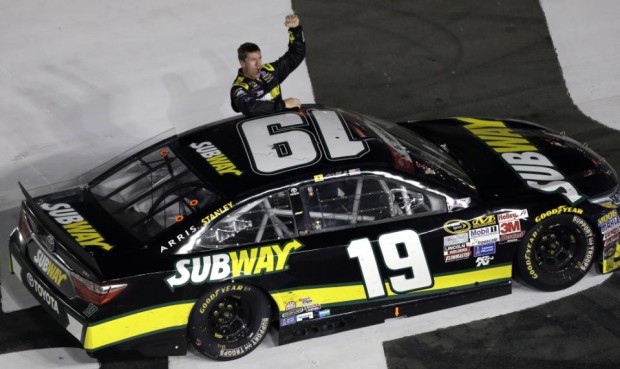