Denny Hamlin and Kevin Harvick showed why they are title favorites, winning this weekend’s NASCAR Cup Series races at Dover.

Denny Hamlin overtook his teammate Martin Truex Jr. with only nine laps to go to win his sixth race of the season and his first at Dover. In a race dominated by Joe Gibbs Racing, Hamlin led 115 laps, sweeping the first two stages. However, the three-time Daytona 500 winner lost the lead to Truex during the pitstops after stage two and dropped to third after the restart. Nevertheless, Hamlin clearly had the best car on Saturday and was able to make the most out of lapped traffic to get by Truex with nine laps to go.

After five consecutive third-place finishes, Truex came home second. Despite leading for most of the final stage, the 2017 champion struggled with traffic at the end of the race, opening the door for Hamlin to take the lead. Kyle Busch made it a Joe Gibbs 1-2-3, finishing ahead of Kevin Harvick and last week’s winner Chase Elliott, who had started from pole.

Clint Bowyer was sixth, in front of 11-time Dover winner Jimmie Johnson. The seven-time champion took advantage of William Byron’s terrible race to briefly move ahead of his teammate in the playoff standings. Penske drivers Joey Logano and Brad Keselowski were eighth and ninth, while Ricky Stenhouse Jr. rounded out the top ten.

.@KevinHarvick's victory at the @MonsterMile marked the 85th overall win for #SHRacing. It was our 63rd points-paying #NASCAR Cup Series victory, our eighth of the season and our fourth at Dover.

A day after Denny Hamlin had tied him as the driver with the most wins in 2020, Kevin Harvick captured his seventh win of the season and his third at the “Monster Mile”.

The Stewart-Haas driver dominated the second race of the weekend, leading 223 of 311 laps. After taking the lead for the first time near the end of stage one, the 2014 champion dominated stage two and most of stage three. Harvick was in control of the race, but a late caution brought everyone to pit road and Jimmie Johnson’s two-tire gamble gave him the lead for the final restart. However, Johnson wasn’t able to clear Harvick, who got by the Hendrick driver after the restart to grab yet another win in 2020. Even though there is still a race at Daytona before the start of the playoffs, Harvick has already clinched the regular-season championship and the additional 15 playoff points that come with it.

Martin Truex Jr. also managed to get by Johnson, earning another second-place finish. Jimmie Johnson’s two-tire gamble wasn’t enough to give him his first points-paying win since 2017, but allowed the seven-time champion to finish third after being hit with a speeding penalty earlier in the race.

William Byron rebounded from an awful Saturday to finish fourth and claim a lot of stage points, jumping back ahead of Johnson in the playoff standings. After being involved in a crash on Saturday, Alex Bowman came home fifth, in front of Joey Logano, Aric Almirola, Brad Keselowski and Austin Dillon, who was cleared to race this weekend after missing the first race at the Daytona Road Course due to a positive Covid-19 test. Cole Custer completed the top ten.

Saturday winner Denny Hamlin was only 19th after a loose wheel forced him to stop under green during stage three. Despite leading the first 11 laps, polesitter Matt DiBenedetto quickly fell out of the top ten and finished in 17th place. DiBenedetto’s recent results have dragged him into the battle to make the playoffs, since he is now only nine points above the cutline. With less than ten points separating DiBenedetto, Byron and Johnson, only two of them will make it into the playoffs (assuming there is not a surprise winner at Daytona). Sunday’s race was red-flagged after stage one to make repairs to a concrete patch at turn four. 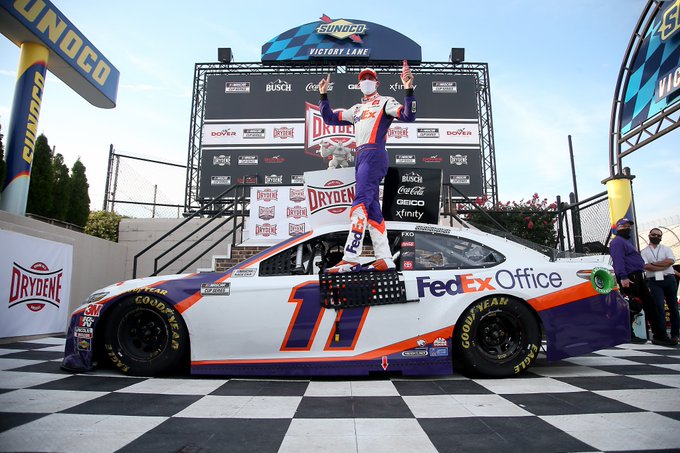