England will require eight wickets for victory tomorrow after an exhilarating fourth day in Rawalpindi. A bold declaration at tea set the hosts 343 to win, as England was happy to dangle the carrot in their relentless pursuit of what would be a remarkable victory. Pakistan closed the day on 80-2, requiring a further 253 runs for victory. Meanwhile, England will be quietly confident, having dispatched the Pakistan captain Babar Azam and with Azhar Ali forced to retire hurt.

Pakistan began the day 499-7 after England’s heroics yesterday evening, still well short of England’s first innings total. Agha Salman and Zahid Mahmood batted sensibly, quietly accumulating runs, with Salman reaching a maiden Test half-century. After adding 55 runs together, Will Jacks finally prised out Salman for a well-crafted 53. Jacks went on to wrap up the rest of the innings, finishing with figures of 6-161 off 40.3 overs, the best Test match figures by an English debutant since James Kirtley’s demolition of South Africa in 2003. It was a sensational performance considering Jacks came into the summer of 2022 with just four first-class wickets. Pakistan finished on 579, a deficit of 78 runs.

England’s response got off to a shaky start, Ben Duckett coming back down to earth with a bump, out for a golden duck after guiding a Naseem Shah delivery to slip. Ollie Pope came and went pretty quickly, a tough ask for England’s number three after keeping for 155 overs. Zak Crawley rattled along to fifty, becoming the first England player to reach fifty in both innings at better than a run a ball. Crawley was out immediately after, flicking an attempted pull shot down the leg side to Mohammad Rizwan, setting the stage for Harry Brook.

Joe Root made up for his first innings failure, playing a characteristic knock full of audacious sweeps and dabs, scampered singles, and even facing up as a left-hander in response to the negative lines of Zahid Mahmood. He and Brook added 96 together before Root top-edged one sweep too many off Mahmood, departing for an excellent 73. Captain Ben Stokes lasted just three balls, skying one in the pursuit of quick runs in a typically selfless fashion, leaving the game intriguingly poised.

Brook ensured England remained in the ascendancy, playing a blistering innings that were equally as valuable as his superb first-innings hundred. Brook has exhausted all superlatives in four days; it was an innings that oozed class and style, combining timing and power. Brook was supported by a brief, muscular cameo from Jack, who became Salman’s maiden Test wicket. Brook was eventually bowled for 87, aiming one heave too many at Naseem, as England declared at tea on 264-7. It was a bold move, setting Pakistan an eminently achievable 343 to win, especially considering the lifeless pitch and the lightning-fast outfield, while Pakistan had chased 342 to defeat Sri Lanka in Galle earlier this year.

England opened the bowling with Robinson and Stokes, clearly indicating their tactics. Abdullah Shafique was the first to succumb to the short-ball barrage, top-edging a hook to Brook in the deep off of Robinson. Two balls later, Robinson squared up Azhar Ali, rapping him on the finger and forcing him to retire. His enforced departure heralded the arrival of Pakistani skipper Babar Azam to rapturous applause. The decibel levels raised further when he slashed his counterpart Stokes for four through the off-side, signalling his intent and setting up a potentially mouth-watering duel.

However, the talismanic duel never emerged; Stokes produced a snorter of a delivery that took Babar’s edge, where Pope safely pouched the catch. It signified a massive moment in the match, removing Pakistan’s spearhead and placing pressure on a relatively inexperienced middle order. It was a reward for England’s relentless desire to win; their willingness to engage in unconventional tactics has been a hallmark of this Test match. Imam Ul-Haq and Saud Shakeel guided Pakistan to close of play with undue alarm, but they can be assured that England will throw the kitchen sink at them tomorrow. England’s skill and ingenuity have set up the prospect of a thrilling last day, making a mockery of a featherbed track that seemed destined to produce a draw. 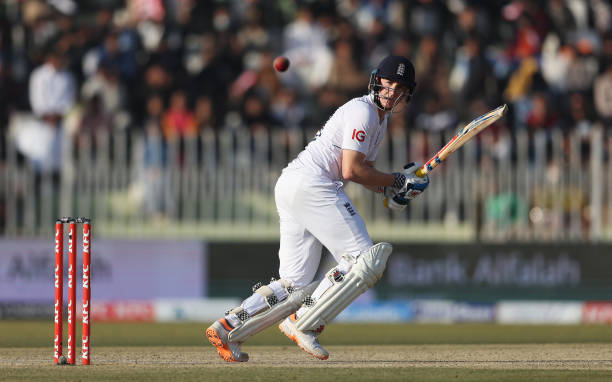