England sealed a superb series triumph with a stunning victory in Pakistan, with Mark Wood emerging as the hero with three crucial wickets. It was another thrilling conclusion in a series that has provided Shakespearian levels of drama, with Pakistan falling just short of chasing 355, an incredible effort that would have surpassed their impressive chase in Galle earlier this year. England has now won eight of their last nine Test matches, a streak that has been as impressive as it has been entertaining.

Wood’s efforts helped England secure their first Test series win on Pakistani soil in 22 years and the first away series win of the McCullum and Stokes partnership. Nasser Hussain’s jubilant celebrations in the gloom of Karachi had similarly heralded the dawning of an exciting new era, and their victory was regarded as a key moment in England’s journey to eventually reclaiming the Ashes in 2005. The signs are there that the McCullum and Stokes era could be similarly prosperous, if not more successful, blending an exciting brand of positive cricket with unwavering confidence while displaying the grit and determination that Hussain’s side showed back in 2000.

Pakistan forced England to dig deep as they edged ever closer to their target, backed by a growing crowd that started to sense an upset. Pakistan started the day requiring 157 runs to win, with six wickets in hand after Jack Leach’s late wicket last night. What followed was an enthralling morning session as the momentum swung back and forth; it was a session that encapsulated the enduring appeal of Test cricket, full of skill, drama, and even a hint of controversy. It took England twenty minutes to find a breakthrough, Faheem Ashraf pushing too hard at a Joe Root delivery, Zak Crawley taking a comfortable catch at slip. In the process, Root became just the third man to do the Test double of 10,000 runs and 50 wickets, and it seemed that England would comfortably wrap up the match.

But in his short Test career, Saud Shakeel has already proven to be a thorn in England’s side, and he continued in this vein, showing a composure that belies his inexperience. While Shakeel quietly accumulated, his partner Mohammad Nawaz took the positive approach, displaying particular aggression towards England’s spinners, who struggled to stem the flow of runs. Stokes, as usual, was proactive in his bowling changes, but as the partnership grew, it appeared the match might be slipping from England’s grasp. You wondered if they were going to rue their collapse yesterday morning, which had given Pakistan a glimmer of hope.

With lunch approaching, Stokes turned to his Durham colleague Mark Wood, his speedy trump card. Wood delivered a barrage of short-pitched deliveries, and with Pakistan 290-5 and starting to look the favourites; he produced two telling blows in the space of a couple of overs. First, removing Nawaz, who gloved a typically hostile delivery down the leg side to Ollie Pope, before taking the crucial wicket of Shakeel, though not without a dose of controversy. Shakeel similarly chased one down the leg side, Pope scooping a seemingly excellent low catch diving to his right. However, TV replays indicated that the might ball might have brushed the ground after Pope had taken the catch. Crucially, though, the soft signal was out, and third umpire Joel Wilson decided there wasn’t conclusive evidence to overturn the decision. It was harsh on Shakeel, just six short of what would have been a deserved maiden century.

England resumed after lunch in pole position, the hosts needing 64 runs to win. Abrar Ahmed, the magnificent debutant, came out swinging, and you briefly wondered if he was writing his own Hollywood script; 11 wickets and smashing his team to victory. It wasn’t to be; his merry cameo ended when he slapped a James Anderson delivery straight to Ben Duckett at cover, leaving Pakistan 310-8. Zahid Mahmood joined Agha Salman at the crease, and they took Pakistan 36 away from victory until Mark Wood re-arranged Mahmood’s furniture with a rapid delivery that jagged back in. Ollie Robinson had the honour of sealing a famous series victory, Mohammad Ali edging one through to Pope, England winning by 26 runs after another commendable chasing effort by the Pakistani batters.

Huge credit must go to England’s three seamers, taking eight of the ten second-innings wickets to fall on a pitch that provided little assistance. Wood underlined his X-Factor, dragging the match back in England’s favour with some hostile bowling before lunch. For all of Anderson and Robinson’s undeniable prowess, Wood’s extra pace proved to be crucial in making the breakthrough, showing why he is such a priceless commodity for England, especially overseas. Stokes deserves huge praise once again for his captaincy, juggling his seamers expertly and keeping his cool impeccably. Post-match, Mark Wood said he’d ‘run through a brick wall for him,’ an indicator of how well he has motivated and galvanised his side.

England will travel to Karachi seeking a whitewash, a scarcely believable notion a year ago when England were being pummeled in Australia. Pakistan will be playing merely for pride, though they can take some heart from the emergence of Saud Shakeel and Abrar Ahmed. Shakeel has quickly emerged as a batsman of both high quality and temperament, while Ahmed’s sparkling debut has marked him out as a potential star of the future. England may well tinker with their side; James Anderson surely will be given a well-deserved rest while you wonder if it’s worth risking Mark Wood in a dead rubber, considering his injury record. It would be an excellent opportunity to blood 18-year-old leg spinner Rehan Ahmed while Ben Foakes may be due for a return. Karachi holds fond memories for English cricket fans, and few would bet against England making more memories there next week in what has been a thrilling series thus far. 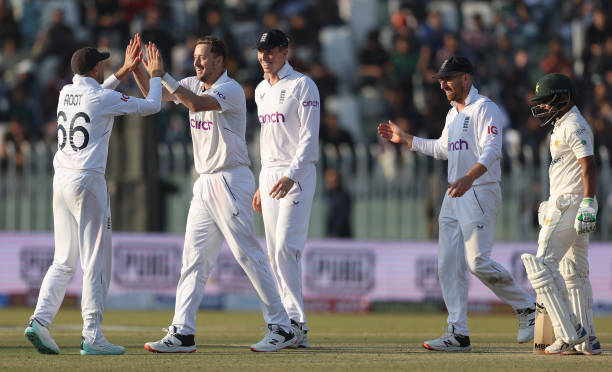