Football is a very funny game, when Cristiano Ronaldo scored a hat-trick against Tottenham on the 12th March, Manchester United were in the top four (albeit with four more games played than Arsenal but five points clear of Tottenham). Fast forward a month and Manchester United find themselves in seventh (six points off the top four and with a fight for Europa League on the cards).

Ralf Ragnick was very vocal after Manchester United’s appalling defeat to 17th placed Everton (1-0 at Goodison Park). He stated “in order to qualify for Europe you have to be able to score in 95 minutes in a game like this.”

He was also asked whether the latest rumours and links with Ajax manager Erik Ten Hag to the club affected their focus and performance, to which he said “which shouldn’t allow anyone to have that alibi or that excuse.”

Ragnick is correct in saying that but it can’t be an easy environment to be in as you are fully aware of the interim status of the manager and with the form of a free-scoring Tottenham side, who have the most Premier League goals in 2022 with 34 goals and five wins in their last six and a rejuvenated Arsenal side, you can see why this season might feel pointless for the Red Devils.

That being said, many of the players are playing for their futures. Harry Maguire had another moment to forget with it being his deflection from an Anthony Gordon shot that wrong-footed David De Gea and gave Everton the three points.

With Tottenham’s 4-0 win over Aston Villa in the evening kick-off, Manchester United are six points off the Lillywhites, with matches against Liverpool (A), Arsenal (A) and Chelsea (H) in their last seven games. Top four is starting to look like a distant reality, with this in mind have Manchester United done enough to deserve European Football at all or would they even want to play in the lower reaches of European Football.

Table of results between Top 8 in the Premier League

Whilst this table does not tell the full story, it is representative of the team’s performances in the big games and Manchester United have performed well comparatively to the rest of the top 8, sitting in third with three games to go.

They still have to travel to Anfield and the Emirates before a home game against Chelsea but even if they pick up zero points from these three games they will mostly likely finish in the top five of this mini-league.

So in terms, of their matches against their rivals Manchester United seemingly deserve European Football, they have done the double over Tottenham and West Ham this season and have only failed to beat Manchester City, Liverpool and Chelsea (who they have drawn against). With Arsenal still to come, they could well add them to their list of doubles.

The key question is, why if they have been performing well against their rivals are they six points off the Champions League, also taking into consideration they have six more points than 4th placed Tottenham in this mini-league. The answer is that Manchester United have drawn far too many games.

Manchester United have lost less games than any other team in the top four race, only having eight losses (Tottenham have 10, Arsenal – 10, West Ham -11 and Wolves – 13). They have drawn the most with nine matches drawn, including a home draw to Everton, a draw away to a Newcastle side who were 19th and draws against Watford and Burnley in February. They also drew 1-1 twice with Southampton.

The issue is the lack of goals in these games, Manchester United have only drawn one game in the Premier League this season in which they have scored twice. A worse issue is that many of these draws come from winning positions, they were ahead at home to Everton, away to Chelsea, away to Aston Villa, home to Southampton and away to Burnley.

Arsenal and Manchester United’s records are comparable but when comparing to the top fur frontrunners, Tottenham, the loss of points from winning positions is startling and just adds to the argument that Manchester United don’t deserve European Football.

For a side with the world’s most expensive right-back, centre-back and a four time Champions League winning centre-back, you would think Manchester United would be matching the heights of Rio Ferdinand, Nemanja Vidic, Patrice Evra and Gary Neville who in 2008 only conceded 22 goals on the way to winning the Premier League for an eleventh time.

To put those heights into perspective, the top two this season have conceded 18 (Manchester City) and 20 (Liverpool) in 30 games. This Manchester United side have conceded double the amount of goals with 42 in only 31 matches.

Aaron Wan-Bissaka and Harry Maguire have rightly come under some criticism for their poor performances and the basis of any strong team is a strong defence, particularly when the side has only scored 49 goals in 31 matches.

For Manchester United to make top four, which should and will still be the aim, they will need a massive turn-around from this embarrassing defeat at Goodison Park, particularly with the difficulty of their fixtures to come. If they can overturn this six point gap then the rest of the league season is irrelevant and could be crucial for any ambitious transfer business this summer window.

Despite this, I think it is down to Arsenal and Tottenham for the top four and Manchester United will be left to battle with West Ham and Wolves for a top seven place, if they want it.

This seems like a daft question but it is a serious question. If top four is beyond them what incentive is there for European Football next season?

There is one answer, Champions League Qualification, the winners of the Europa League get a place in Pot One of the Champions League, which is reserved for league winners and European Competition winners. They may view this as easier to win that getting top four, but as shown by last season’s defeat to Villareal in the final in Gdansk, Poland this is not the easiest competition to win. In fact, no English club has won the competition since Manchester United did in 2017 (Jose Mourinho’s first season).

In addition to this, only two other English clubs have won the competition this century (Chelsea, 2013 and Liverpool 2001). In a competition dominated by Spanish sides (seven out of the last nine winners have been Spanish) Manchester United might fancy their chances but they wouldn’t necessarily be favourites.

Also, Europa league Football may not attract the type of players Manchester United will want in the summer, Declan Rice and Harry Kane may be in the competition already or if not in the Champions League. Manchester United are a big club but the draw of Old Trafford will not be so bright if they are playing in Europe’s secondary competition.

Despite this, Manchester United will be thinking about Prize Money as well, Merit payments are paid to clubs based on their league position with each position being worth £2million and the winners of the Europa League getting around £9million. Whilst this is not massive for Manchester United it is enough of an incentive to deem finishing as high as possible worth it.

Why would any side want to miss European Football?

A simple answer is fatigue from fixture congestion. In the Champions League, you will play Tuesday or Wednesday and a match on Saturday. Playing in the Europa League and European Conference League means a side has to play Thursday and then Sunday.

This season we have seen the impact of European Football on a side, Leicester City have had to play Thursday nights in the Europa League and then European Conference League, without European football last season they were in the top four at this stage last season but are currently ninth after dropping points in three of the Sunday matches after a Europa league fixture (Brighton 2-1 defeat, 2-2 draw with Crystal Palace and a 1-1 draw with Leeds.)

Tottenham’s form has also been impacted by European Football, Tottenham out of 4 Thursday to Sunday matches, they dropped points in three games (losing to West Ham and Chelsea and drawing 0-0 with Everton.) Since being knocked out in December, Tottenham have gone from 7th with 19 points from 12 games to 57 points from 31 games (38 points in 19 games: they have been averaging 2 points a game since their last European game).

There is also less prestige for Manchester United in making the Europa League than West Ham and Wolves, considering the signings of Cristiano Ronaldo, Jadon Sancho and Raphael Varane, following the second place finish last season they would have been hoping for a title challenge, this would have then been to make top four. Anything less than that is a failure for Manchester United whereas, a top six/seven finish for West Ham and Wolves represents a relatively successful season.

With this being said, with the additional fixture congestion but without the draw of the Champions League, would European Football be beneficial for this Manchester United side?

Whilst there is a compelling argument that Manchester United may want to avoid the Europa League or European Conference League, a club with the pride and history of Manchester United would not want to finish seventh again (like in 2014) or eighth (which would be their lowest Premier League finish).

While the fans may not want the extra matches in a secondary competition it may be a useful competition to blood some young talent into this Manchester United side. As you may remember, Marcus Rashford made his debut in 2016 in the last 16 of the competition, scoring two goals against FC Midtjylland.

Amad Diallo also made his home debut in the competition last season against Real Sociedad and the competition could be very useful for him next season. It could also be important for the development of Shola Shoretire (18) and Hannibal Mejbri (19) as Manchester United will look to give youth a chance in order to save on the type of transfer that United have become so accustomed to.

I do believe Manchester United will do enough for European Football if seventh place gets European Football and that the chance to use European football for valuable experience is one that no team should be willing to turn down.

Do they deserve European Football?

At the end of the day, the only league table that matters is the final league table, Liverpool proved that last season when a late run of form, including a late Alisson header against West Brom helped a side who had been 8th in the league in March finish in the top four.

Should Manchester United get European Football, they will still have underperformed pre-season expectations but under the circumstances and the closeness of the race, 8 points separating 4th to 8th then to get form at the right time to consolidate European Football next season then it will be well deserved. 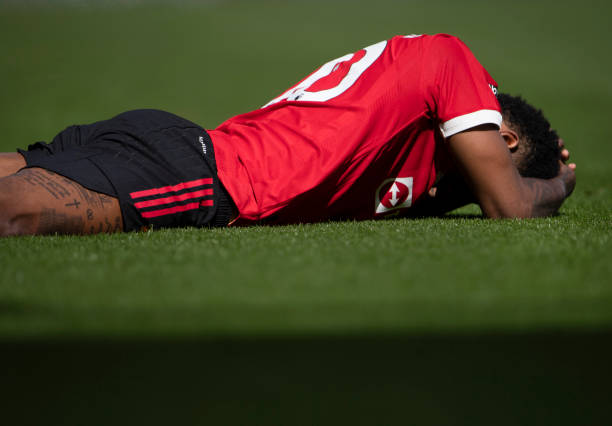