It was back to normality for both tours this week after the Masters last weekend, and the European Tour moved onto its South African swing with three tournaments to come from there, starting with the Joburg Open at Randpark Golf Club in what was the first international men’s golf tournament in the county for nine months, and it gave plenty of players a chance to grab ranking points as the Race To Dubai enters its final stages of the season.

This tournament was also the first of a few to be co-sanctioned alongside the Sunshine Tour and the field included plenty of homegrown talent, and one, in particular, began his tournament in style, as twenty-year-old Wilco Nienaber shot an opening-round 63, including a drive on one hole of 439 yards!!! Bryson & Co eat your heart out.

Nienaber wasn’t the only one to drive over 400 yards though, as another home player Brandon Stone also struck a drive north of that figure, so it’s not just the PGA pros who can hit drives a mile off the tee, seems to be the way the game is headed now, massive off the tee and then muscle a wedge onto the green for a birdie or eagle.

Also a special mention to Christiaan Bezuidenhout who played in the Masters last week and then flew all the way to Joburg to be part of his home tournament and the South African swing and landed on the day the tournament began, so quite some effort that, and he managed to shoot 68 & 69 to be five-under at the halfway stage, so not a bad effort at all.

Nienaber would end the day in second place and a shot behind another South African Jacques Blaauw. The four-time winner on the sunshine tour enjoyed a marvellous round of golf and posted a eight-under par 63 to be thirteen under par after two days of action.

Another home player, Shaun Norris, also began the Joburg Open with a 64, whilst Jayden Trey Schafer was another South Africans to be in contention going into the weekend after shooting two decent rounds, which was good for the country as golf returned.  Always good to see home players in contention for a tournament in their own country.

What about other nationals to be in contention then, well Canadian Aaron Cockerill backed up a decent 64 in Round One to get towards the top of the leader board with a second-round 68, and Dane Joachim B Hansen is only three off the lead with two holes of his second round to play. Veteran Englishman Richard Bland struck two 67s to be right up there at the halfway stage, whilst the US had two players in the top ten, Julian Suri was five shots off the lead whilst Johannes Veerman was a further shot back.

And Welsh golfer Rhys Enoch was also in the mix heading into the weekend after rounds of 65 and 69 which saw him five off the lead heading into Day Three.

Unfortunately, Round Two was unable to be completed on Day Two after a suspension in play due to the threat of lightning caused a long delay and then darkness forced the remaining players off the course once they had come back out to complete their rounds, meaning a handful of golfers have to come back and complete their second rounds early tomorrow morning.

Hansen and Norris have the chance to close the gap to the leaders with their remaining holes tomorrow, below is how the leader board looked at the end of day two… 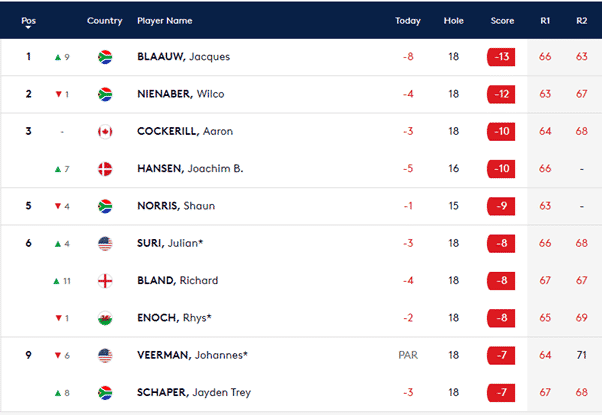 Onto the PGA Tour now and they had moved around three hours from Augusta National to Sea Island for the RSM Classic, and this tournament would be played on two courses the first two days, Seaside Course and the Plantation Course, before the final two rounds took place on the Seaside one.

Their current season is only a few weeks old so the players would be doing all they could to get early FedEx Cup points on the board, and a fairly strong field was assembled for this one, including many who had taken part in the Masters too (including five of the top ten).  It would be a season that included six majors, probably a first I would imagine!!!

It was Englishman Matt Wallace who led after round one with a brilliant 64 in very tough conditions with a very strong northerly wind battering both courses, and with Wallace potentially playing the tougher Seaside Course first time out, he looked to be in good shape.

Tied with Wallace after round one was a certain Camilo Villegas, who after one of the toughest years of his life after losing his two-year-old daughter Mia earlier this year, played a lovely round of golf on the same course as Wallace too, he would certainly be a popular winner that is for sure.

It was a very bunched leader board after round one with the top ten separated by just one shot, and with a six-four spread of who had played the Seaside and Plantation course, it would be interesting to see how they all got on playing on the alternative course in their second rounds.

Day Two saw lighter winds than of Day One so better scoring was predicted, and plenty certainly made use of the warmer conditions to make strides up the leader boards after tough opening rounds.

The most impressive jump came from American Joel Dahmen who after shooting a two-over par 74 on the Plantation Course on Day One to be outside the top 100, shot a magnificent nine under par 61 on the Seaside Course to lift himself up 94 places to be T-11 at the halfway stage and just seven back from the lead.

Brain Stuard, who also hit 74 in his opening round on the Plantation, netted a seven-under-par round of 63 on the Seaside to jump up 77 places and be T-28 at the half-way stage, and Matthew NeSmith, who shot a level par 72 on the Plantation Course on Thursday and was outside the top 50, hit a brilliant seven-under-par 63 on the Seaside Course to jump up over fifty places and be T-12 and also seven shots off the lead after two rounds.

There were so many low rounds on Day Two it’s hard to talk about them all, but Bronson Burgoon jumped up 28 places to be three shots off the lead after a 63 to be in third was also impressive, but leading the way by three after two rounds is Robert Streb, who also shot 63 to be fourteen under par going into the weekend, very impressive golf indeed.  Streb, of course, has won here before too, so that could certainly help.

So what of the Day One leaders, Wallace and Villegas, well Englishman Wallace went backwards a bit on Day Two after he could only manage a disappointing 71 on the Plantation Course to end T-11th at the halfway stage although still in a good position for the weekend, whilst for Villegas, well he is nicely placed in the second spot, two shots behind leader Streb, helped by an eagle on the last.

I reckon after the year he has had winning here would be such a nice boost and there probably would not be a dry eye in the house if he did. He certainly has a great chance that is for sure, below is how the leader board looks after two rounds…

That’s how both tournaments are after Day Two heading into the weekend, moving day tomorrow in both, I will have an article on how the tournaments end and who triumphs plus how it affects the top of the Race To Dubai and the FedEx Cup standings… 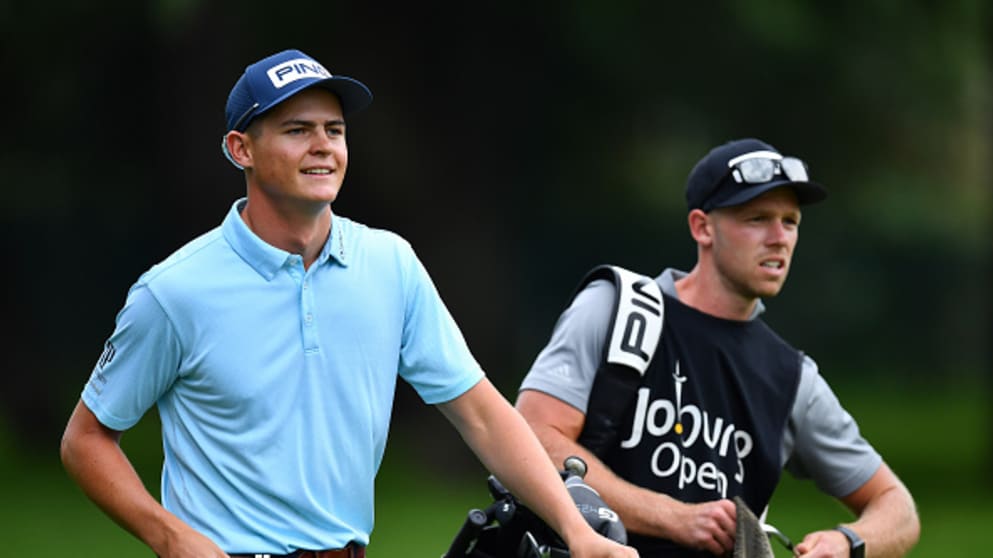