The USA were made to work for their 14th World League title after beating Hungary in a tense final.

The USA have beaten Hungary 14-8 (4-2, 2-1, 3-4, 5-1) to lift their seventh consecutive World League title. Being pushed all the way to the last quarter by a spirited Hungarian side, three goals in ninety seconds won the game for the USA.

Unlike many predictions, the game was a very tight affair until mid-way through the last quarter. Hungary, who deserve a lot of credit, enjoyed much success in the game by frustrating American’s with their organised defending.

But ultimately, the USA dug deep and proved why they are serial winners. Four goals from Maggie Steffens, as well as hat-tricks from Maddie Musselman and Rachel Fattal, proved too great a task for Hungary.

The first quarter, like most of the game, was close, despite a fast start from the USA that saw them score three unanswered goals. Zsuzsanna Mate gave away a penalty twenty seconds into the game, giving Maggie Steffens the chance to score the opening goal of the final. Steffens then scored a second on the extra-play after Vanda Valyi was excluded. Steffens scored her second with a precise shot into the left hand of Alda Magyari’s goal. It only got worse for Hungary as the USA scored immediately after, with Madeline Musselman firing a rocket that smashed the underside of the bar before sneaking in.

At 3-0, you worried that the game might turn into a formality, but Hungary kickstarted their game with a fine finish from Greta Gurisatti’s bouncing near post shot. The goal was reviewed by VAR, but the Greek referee Georgios Stavridis concluded the goal would stand. Then Hungary scored another from a long ball the length of the pitch from Magyari in goal found the hand of Rita Kesztheyli – who put the ball past Ashleigh Johnson.

Paige Hauschild then scored with a minute to go in the quarter to give the USA a two-goal advantage. Only an excellent reaction save from Johnson denied Aniko Gyongossy from getting one back for the Hungarians. The score after the first period was 4-2 to the USA.

The Americans put Hungary under a lot of pressure at the start of the second quarter – with shots from Kaleigh Gilchrist and Alys Williams being well saved by two solid stops from Hungary’s young keeper. The blocked shots continued, with Paige Hauschild’s shot being deflected bravely by Krisztina Garda.

After a lot of defending from the Hungarians, they then pounced on Alys Williams exclusion, with Gurisatti converting her second of the game, taking the score to 4-3.

But two exclusions from Zsuzsanna Mate and Vanda Valyi gave the USA two quick goals – converted by Steph Haralabidis and Maggie Steffens. Hungary needed a goal to settle the ship, and Melissa Seidemann’s exclusion was the perfect opportunity, but an inspired block from Haralabidis denied Dorottya Szilagyi her first of the game. The Hungarians were wasteful again on their man-up when the USA captain, Maggie Steffens, snuffed out their attack from Aria Fischer’s exclusion.

However, at half-time with the score at 6-3, Hungary could be happy that the USA were not running away with the game. Attila Biro’s side had chances, but they just hadn’t made the most of them.

Vanda Valyi beat Rachel Fattal to the sprint, giving Hungary the first chance of the quarter, and they didn’t waste it. Kesztheyli’s pass into the centre found the rising Natasa Rybanska, who stayed high to carefully place the ball past Johnson.

The USA scored straight after through Steffens as Kesztheyli was excluded, but Hungary were keen to keep their feet on the accelerator. Szilagyi’s purposeful pass found Dora Abel-Antal, who converted.

But when Vanda Valyi received her third major, Musselman scored her second of the game.

At 8-5, USA then had a great chance to put real daylight between them and Hungary – Krisztina Garda’s exclusion was a perfect chance for the team in white to assert their authority, but Rachel Fattal’s shot struck the left-post.

But the USA did get their ninth goal after their Head Coach, Adam Krikorian, called a time out that Makenzie Fischer planted home off the bar. So precise was the shot, that referee Arkadiy Voevodin needed to consult VAR to ensure it went over the line. Fischer, however, was then excluded, giving Hungary a goal on the man-up play. BVSC’s Dora Leimeter scored from the right-hand side, firing the ball into the roof of the net.

Keszthelyi was then excluded and it looked for all the world that the USA would score, but when the pass was popped to Maddie Musselman on the post, she fired the shot well over the goal.

Ninety seconds from the end of the third quarter, Paige Hauschild’s exclusion tempted Biro Atilla to call a time out. It was a wise decision, as the coach instructed his side to set up Dora Leimeter for the shot. The stretching arm of Johnson couldn’t prevent the ball from rippling in the back of the net. The score was 9-7 at the buzzer.

Contrary to what most would have predicted, Hungary were very much in the game going into the last quarter. When Steffens was excluded ninety seconds into the quarter, Adam Krikorian’s protests were too much for the referee as he was booked. Kisztheyli then converted the man-up from a central position to grab her second of the game and to make the score 9-8.

Rachel Fattal’s shot from 8m on the right, however, was too powerful for Hungarian keeper Magyari, as she pushed the ball into the path of the net.

The USA won the game within the next two passages of play. They scored two immediately after without reply, as Makenzie Fischer found herself at the back-post with much time to pick her spot, which she certainly did. Fischer’s shot was a low, cross-caged shot that kissed the post on the way in before Fattal netted her second goal in 60 seconds.

With a minute to go, Alys Williams scored her ninth of the competition, as yet another shot was too much for Magyari to save – getting hands to the ball, but without the strength to keep it out.

Rita Kesztheyli may have thought her backshot twenty seconds from time could have won goal of the game, but it struck the outside left post. She then pulled an American back on the counter, meaning she received her third personal foul. Right on the buzzer, Musselman scored her third of the game – meaning USA would win the game by 14 goals to 8.

The win will reiterate USA’s ambitions to win gold at the Tokyo Olympic games whilst Hungary can be proud of the way they remained resolute and competed against such an impressive USA side. 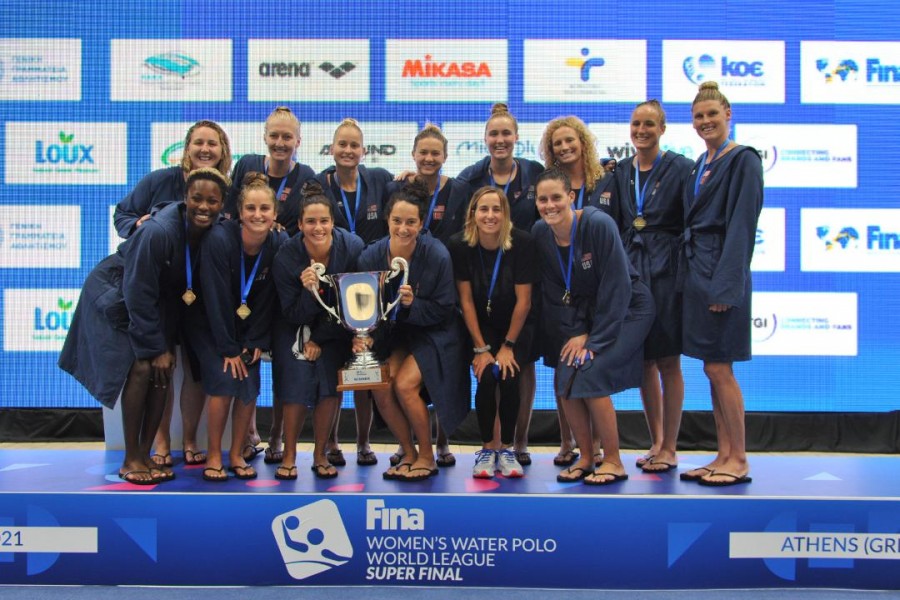