Another dominant performance from the USA puts them into the World League Final after embarrassing a shell-shocked Russia by 17 goals to 8.

The Americans await the winners of Hungary and Canada – who play in the last game of the day.

A nightmarish second quarter did the real damage, but the Russian side was totally outmatched by the USA throughout much of the game.

Perhaps Russia was lucky to even get into the semi-final, arriving only by winning a penalty shootout against Greece yesterday evening. But in all probability, with the way the USA played today, it’s unlikely Greece would have laid a glove on the team from across the Atlantic had they been in Russia’s shoes.

All the signs looked good for viewers as Russia looked really up for the game. They started well with Alena Serzhantova winning the sprint to allow Mariia Borisova to launch one into the top left-hand corner of Ashleigh Johnson’s net, giving Russia the lead. But the USA responded with their own sharpshooting – Maddie Musselman rose high from position four to put the USA back on level terms.  Then, on the breakaway, Maggie Steffens kept her cool in traditional fashion, to bounce a great shot past Russian keeper, Evgeniia Golovina.

However, Russia was not to be deterred so early on. A great entry pass into the pit allowed Ekaterina Prokofyeva to score a clever backshot. The Russian did really well to hold off Rachel Fattal, before slotting the ball into the bottom right-hand corner. With four minutes gone, Makenzie Fischer then converted to make it 3-2 to the USA.

Russia had a great chance to equalize through Alena Serzhantova, but Ashleigh Johnson made a great save, not only to stop the ball passing her but then to set the USA away on the counter – from which the Americans would be awarded a penalty – that Stephanie Haralabidis would put away.

But it was Haralabidis who would cost the USA the next goal –  her exclusion from the pit allowed Elvina Karimova to make it 4-3 with a sumptuous cross cage shot from the left post.

The USA could have had their fifth goal from Evgeniya Soboleva’s exclusion. Stephanie Haralabidis had two shots in a matter of seconds blocked heroically by Ekaterina Prokofyeva on both occasions.

But just before the end of the first quarter, a delicately floated ball into the pit from Jamie Neushul allowed centre-forward Melissa Seidemann to tap in to make it 5-3 to the USA. Although Russia may have felt the two-goal lead was not a fair reflection of the first period, they would have been satisfied that the game was evenly balanced.

The USA got the first goal in the second quarter when a Rachel Fattal cross pass found Makenzie Fischer, who fired in a low shot that Russian keeper Golovina could only get a hand to on its away into the goal. The pressure was really being put on Russia when a looped ball across the face of a goal resulted in an American penalty.  Anna Timofeeva was the guilty culprit who then saw Musselman get her second of the game.

Then, not long after, Russia’s best chance of the quarter came from a Mariia Borisova backhand which was saved from the pit. From that, the USA went on to score their eighth goal courtesy of a fine goal from the bucket by Alys Williams. The 27-year-old turned the Russia pit-defender with much dominance, before slotting the ball into the right-hand corner with conviction.

The quarter only got better for the USA, with Aria Fischer joining in on the action. It was through her extra-player goal from Soboleva’s exclusion did we see a small smile on the face of Adam Krikorian, the American coach, who had seen his team win the quarter 4-0.

But the USA were so secure in defence, they rarely looked troubled by anything that Russia could conjure up. On USA’s first attack of the quarter, Musselman scored her third from the left-hand side. At this point, it was shock and awe from the Americans, with a neat lob from Alys Williams from a close-range gave the former UCLA star her second of the game, and America’s eleventh.

Aleksandr Gaidukov called a timeout in the quarter in which Russia nearly converted, but the strong arm of Musselman denied Aleksandr Ivanova a goal. As ruthless as the American’s are, they went straight up the other end of the pool and scored from the 5m penalty mark – when Evgeniya Soboleva received her third major, making it easy for Makenzie Fischer to score her third of the game.

The American’s did have the ball in the net, but Paige Hauschild was adjudged to have not played the ball before the 6m shot.

Russia did finally penetrate the American’s defence. It took a looping shot from heavily strapped Nadezhda Glyzina to ensure Russia scored their first goal in just under fifteen minutes.

But there were no celebrations from the Russians, as the game had gone. Just before the end of the quarter, Vernokia Vakhitova was not subtle in pulling on the costume of Melissa Seidemann whilst in the motion of shooting. Evgeniia Golovina had no chance of saving the resultant penalty shot from Steph Haralabidis.

And so with the score at 13-4, the contest was long over before the game entered the final quarter. Russia won the sprint in all four quarters, but that was as far as the victory went for the side in white hats.

Aria Fischer had a great chance to score her second of the game, but she fluffed her lines, skying the ball way over the bar.

Simanovich then pulled one back for Russia, with her close-range bounce shot sneaking under the ever-present arms of USA’s keeper Ashleigh Johnson. Russia then called a timeout when Fischer, who missed the sitter a minute before were excluded. Their set move aimed to find a white hat on the back post, but the pass went awry, and nothing came of it.

Adam Krikorian then called a timeout for the USA that worked perfectly. A 3-3 move that swung into a classic 4-2 gave Maggie Steffens her second of the game. It only took a minute more before the USA grabbed their fifteenth goal of the game – with Rachel Fattal using all the time and experience she possesses to find the top corner.

A fatigued looking Russia looked totally degraded, but they did get one back from the pit – owing gratitude to Anna Timofeeva for scoring with a nonchalant shot past the USA keeper.

But keeping to the theme of the game, the USA struck back swiftly – a superb pass from the keeper Johnson into the pit allowed Aria Fischer to make amends for her earlier miss, and she did with style – flicking the ball past the onrushing Russian keeper.

With just over a minute to go, Russia showed some character by converting two goals. The first was a man-up situation finished by Maria Bersneva before a clinical finish from a drive-by Evgeniya Ivanova.

The last goal of the game, however, came from Steph Haralabidis – whose tame shot was clawed into the net by the Russian keeper. Haralabidis, who plays her polo in Greece for NC Vouliagmeni, won’t care, however, as it was her third of the game and the final goal in a game that her side again, dominated.

Russia will have to regroup fast if they want to return home with a medal. They will contest the 3rd/4th play-off against either Hungary or Canada. 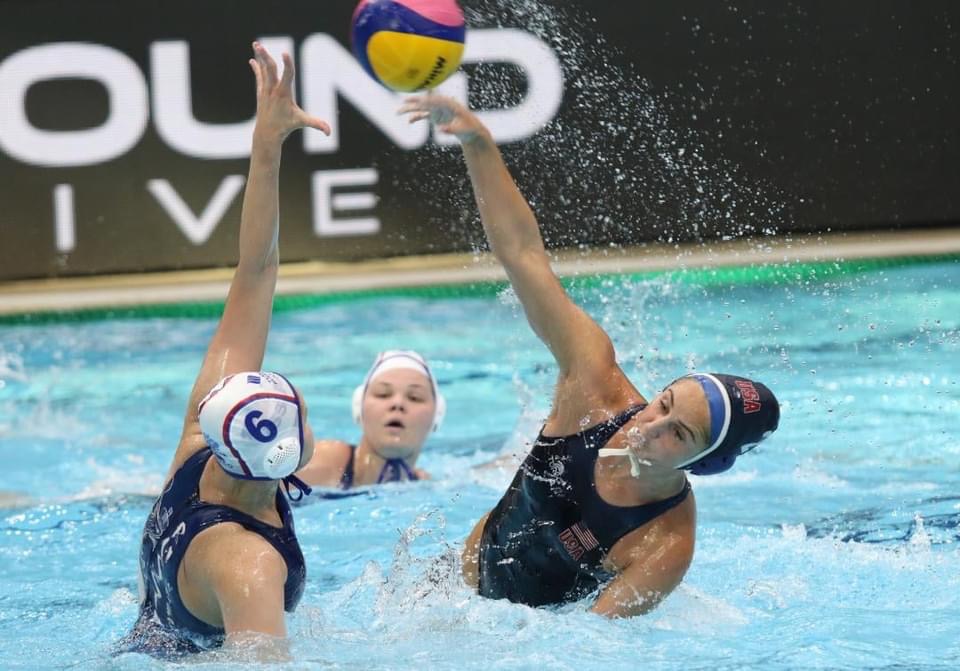