Khabib Nurmagomedov, the young boy from Dagestan, Russia, wrestling and wrecking machine with the most polite and professional attitude towards his opponents and his peers, he is Khabib Abdulmanapovich Nurmagomedov, coming out from Russia he was a wrestling prodigy and when he came into the UFC he was thought to be a classic wrestler who would take his opponents down and ground and pound them or look for a submission.

He did wrestle, landed ground strikes and has a few submission wins as well, but what made Khabib Nurmagomedov the most dangerous fighter in the world is that he would not take you down completely he would push you against the cage incapacitate the lower half of the body then land punches on the head, and if given an opening he would grab your neck and choke you out.

In comes, Justin Gaethje the most violet fighter in the most violent sport in the world, Gaethje has the record for landing the highest strikes per minute for any lightweight in the history of UFC.

He has a simple philosophy of either knocking his opponents out or himself getting knocked out, in his own words “the way I fight I either knock guys out or get knocked out”. Gaethje may look like the classic American brawler, but he also a great defensive wrestler, with the 2nd highest takedown defense in the lightweight’s division. Stylistically he is the best matchup for Khabib

Both Khabib Nurmagomedov and Justin Gaethje have similar outlooks towards the sport and believe in respecting their opponents and both are family men, with Khabib recently losing his father to the coronavirus, it was quite unsure if Khabib would fight again in the UFC, his mother certainly did not want him making the walk after the death of his father.

Khabib Nurmagomedov was very close to his father and felt that he had to take another fight in honour of his dad’s memory. So this fight meant a lot to Khabib as it did for Gaethje who had just become the interim champion after defeating Tony Ferguson, in his last fight.

He did not want the interim belt after the fight and believed he had to beat Khabib to truly earn his title. With a true fighter’s mentality from these champions, this was one of the most anticipated fights of the year.

The fight taking place at Abu Dhabi had one hell of a setting, Khabib Nurmagomedov who has always had problems making the weight of 155 pounds but was first to the scale this time and looked great and made weight without any hassle, Gethje did the same and it was a clean weigh in.

The fight started with both fighters making it to the cage and Bruce Buffers iconic voice introduced them to the world, Khabib was the Favorite, Gaethje the underdog.

Khabib Nurmagomedov looked in control of the fight with coming in and out and maintaining the distance while faking some jabs and landing some, Gaethje was gauging Khabib initially but landed some good leg kicks.

Towards the end of the 1st round Khabib went for the takedown and was successful in getting it, he immediately took control and went for the armbar but was stopped by the bell as the round ended. After 1 round it was Khabib 1 Gaethje 0

In the 2nd round Gaethje had clear instructions from his corner to take it slow, not to rush and land more leg kicks, which is where Gaethje was having a lot of success.

With the round starting Gaethje kept his distance and was fighting on the outside when Khabib went in for the takedown, Gaethje was able to defend it partially this time and Khabib landed on his side, Khabib transitioned to his back and used his legs to lock in a beautiful triangle choke,

Justin Gaethje tapped out. Khabib Nurmagomedov, still the undisputed Lightweight Champion of the world, 29-0, and the new number 1 pound for pound fighter in the world.

After the fight Khabib was very emotional and was crying with his head down on the mat, his team consoled and congratulated him, Gaethje too came over and congratulated the champion on his win, what class act from Gaethje. 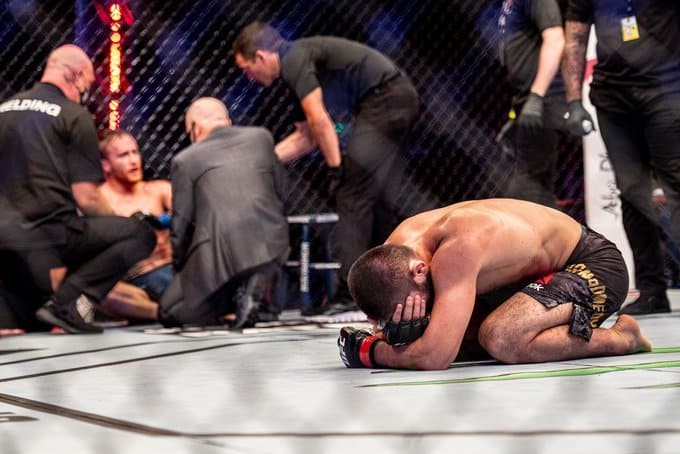 After the win, Khabib was very emotional in his post fight interview with Daniel Cormier, and thanked his team, the UFC, Abu Dhabi and wished Justin Gaethje his best and said that he was a great man, had a great spirit and soon by the grace of God something very good was going to happen to him.

With a record of 29-0, Khabib announced his retirement from the sport of MMA, the most dominant fighter in the history of the UFC, who has not only won every fight in the UFC but also every minute he has been in the octagon. An all-time great Khabib Nurmagomedov leaves an unblemished legacy and a great example for another sportsman to follow in the future. 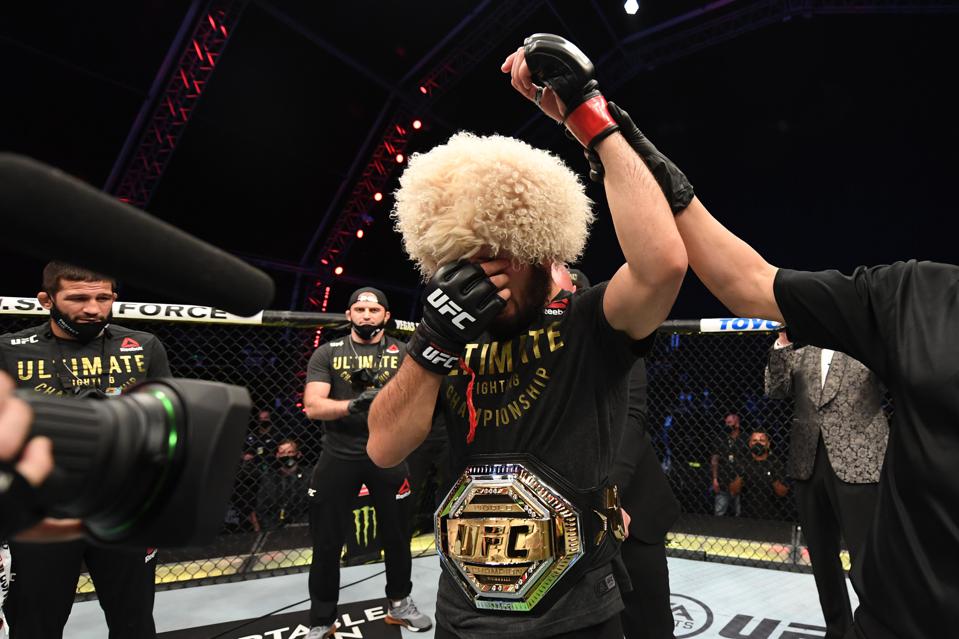