If you have never seen the fight between ‘Marvelous’ Marvin Hagler and Thomas ‘The Hitman’ Hearns, then you must sit down and pull up a ringside seat to watch one of the greatest 3 rounds in boxing history.

It is a riveting, pulsating affair. Brutal, all-out, furious. Nonstop action from first to last. It is simply put, breathless, thrilling, boxing gold.

The fight, between two of the four kings of one of boxing’s greatest eras, ended with a spectacular knockout and the loser carried first to his corner, then out of the arena. The Ring magazine made it fight of the year. Some say it’s the greatest of all time.

BACKGROUND TO THE FIGHT

Coming into the contest, Hagler was 31 years old. He had taken the Middleweight crown from British boxer, Alan Minter in 1980 on a night of shameful racism and coin-throwing at Wembley arena, London. By the time he faced Hearns, he had held the titles for 5 years straight and defended them against top-quality opposition, including Roberto Duran, 10 times. His work rate was prodigious, his boxing skills exemplary. He was steely-eyed and teak-tough – a true and powerful, undisputed champion, who ducked nobody, and, at that stage, was unbeaten in nearly a decade.

Hearns had a 40-1 record and was Ring Magazine’s Fighter of the year. He was a product of the fabled Kronk stable that produced some of boxing’s greatest warriors like Steven and Milton McCrory, Mark Breland, Jimmy Paul, Gerald McClellan. His trainer, the legendary Emmanuel Steward, who would later hone the skills of Lennox Lewis and Wladimir Klitschko, considered Hearns his favourite fighter of all those he moulded in the tough Detroit gym.

Thomas Hearns was four years younger, four inches taller and had superior reach and fast hands. He earned the right to call himself ‘Hitman’ for being a feared finisher, carrying concussive power in both fists, ending 48 of his 61 wins by way of KO. His knockout of the granite-chinned Panamanian Hall of Famer Roberto Duran during their WBC welterweight title fight is as clinical and brutal a dispatch as you will ever see. Duran was out cold before he hit the deck like a tree called ‘Timber’.

Hagler v Hearns had experts in a spin, pundits from around the world calling it ‘a dead-even, pick ’em fight.’

Hearns, however, saw it much clearer: “Hagler is old, ” he said. I’m gonna knock him out in the third round. After Hagler I’ll have a couple of defenses and move up to light heavyweight. I want to make history!”

As predictions go, it was to prove way wide of the mark.

As the two fighters stood in the ring, eyes locked on each other whilst referee, Richard Steele, gave his ‘obey my commands at all times’ speech, Hearns appeared rattled. Something boiled his blood, and right after touching gloves with Hagler who was making his way back to his corner, Hearns just stood in the middle of the ring giving the Brockton, Massachusetts, champion a long, hard, death stare before being ushered away.

Whatever brought the red mist, Hearns ignored Steward’s pre-fight advice to not get involved in a brawl with Hagler. “If you use your jab properly, Hagler won’t get near enough to hurt you.” In fact, Hearns did exactly the opposite. Not using his superior, reach, height, or footwork. He stood and traded. Furiously.

The first round seemed to last forever and has everything. Even re-watching it now, time appears to stand still to admire an instant classic. One commentator said it packed 15 rounds into a round. No quarter asked, none given.

The resonance of the opening bell had hardly stopped ringing when Hagler launched into Hearns with a straight right to the midriff. Sparks flew. Tone set. Liftoff.

Heavy punches, jolting jabs, hooks, bombs, uppercuts, crosses, overhands. We had the lot from both fighters. Ducking, weaving, head movement, footwork. Excellent skills. Hagler just shading it on defensive nous and sheer work rate, but both were hurt. Both had to hold. Either fighter could have gone down. But neither man would back down. It was an electrifying opener.

Just before the end of the round, a razor wire of a cut opened up in the middle of Hagler’s forehead. Blood poured, sweat sprayed, Hearns sensing his moment digs in his infamous right hand, the ‘Kronk shot’, looking to capitalise with a knockout victory two rounds earlier than he had predicted. Hearns threw mighty bombs, fracturing his right hand on Hagler’s skull. Adrenaline ensured he didn’t even notice. Hagler was wobbled and unsettled by the cut, but giving as good as he got as the bell rang for the end of the round.

One thing was for certain, there was no way on earth that this was going the distance.

Emanuel Steward read Hearns the riot act in his corner, begging his charge to stop brawling. “Box him, Tommy, just box him.” And for two minutes, thirty seconds of round 2, Hearns did just that. Pedalling backwards, sticking his jab into the cut on Hagler’s forehead, opening it up again, boxing and moving as blood poured from the wound into Hagler’s eyes.

But with thirty seconds to go, and confidence high, he couldn’t resist a toe to toe trade. This was Hagler’s domain. And after being outboxed, the champion suddenly started to land big punches, clearly troubling Hearns, bringing the by now frenzied crowd to their feet, drowning out Steward, who was audibly screaming, “Box him, Tommy!” The bell rang to a deafening roar, and a bloodied Hagler stood and stared Hearns down. The message was clear, I’m not finished yet.

ROUND THREE: THE DOCTOR, THE TIMEOUT THE CUT AND THE FINISH

The round started with a suitably corner-chastened Hearns getting back to keeping the fight long, stepping in to hit and pop out again, using the ring to good effect. Hagler, unbowed, marched forward relentlessly in search of his opponent.

Once again, the cut opened and after 25 seconds of the round; the referee calls a timeout, motioning for the ring doctor to come and take a look. The crowd is incensed and booing. Hagler shouts ‘You ain’t taking this fight away from me with no cut.”

The doctor agreed, and the action resumed. And what action it was. The very stuff of legend.

Tommy Hearns had what is known in poker parlance as a ‘tell’. When he was hurt, he smiled, displaying a full, bright white gum shield. The big smile was kidology. It was meant to show he was ok, no problem here, you can’t touch this. But in reality, he was shaken to his boots.

Hearns flashed those pearly whites when Hagler tagged him with a big overhand right moments later. His legs betrayed him, dancing him in the opposite direction away from Hagler, making him turn his back on the champion. Hagler shot across the ring in hot pursuit and laid it on thick. Clubbing him with lefts, rights, and centres.

Hagler moved in for the boxing kill and a huge, flush right hook saw Hearns slump forward. A left hook sent him to the canvas where he lay on his back whilst the referee made the count. Cue pandemonium in the crowd.

Hearns got up at eight, but Richard Steele took one look into his eyes and blessedly called off the contest. Hagler looked to the heavens. He had lost many battles in there, but he had won the war. And the roar that greeted this victory has echoed down the ages.

As a beaming, joyous Hagler, held aloft by his team, accepted the plaudits of all four sides of the delirious arena, Thomas Hearns was bodily carried by one of his entourage to his corner stool, limp, and clearly still concussed.

In quick order, they stretchered him out of the ring and from there to the hospital.

He may have played into Hagler’s hands, disobeyed his team’s instructions, and lost the fight, but he gave it his all in a history-making contest. He would have his day again, winning world titles at super-middleweight, light-heavyweight, and cruiserweight, ensuring his place in boxing’s Hall of Fame.

After the fight, referee Richard Steele said that he was totally and utterly ‘spent’. It was that kind of fight, hard not to be put through the emotional mincer fighting the fight with them. Standing, screaming, shouting, transported, involved. ‘

‘There was no way these guys could keep up that pace after that first round.’

And so it proved.

For Hagler, the champion, he successfully defended his belts one more time, before losing a highly contestable and many say, outrageous, split decision to Sugar Ray Leonard. It was a result that made him quit boxing for good.

He retired to Italy a wealthy man and one of the greatest fighters not only of a golden generation but all time.

His legend lives on with his many fights, but none more so than this 7 minutes 52-second war in Caesar’s Palace, Las Vegas, which shook up the boxing world, producing one of its most incendiary of legendary contests. An all-time classic. 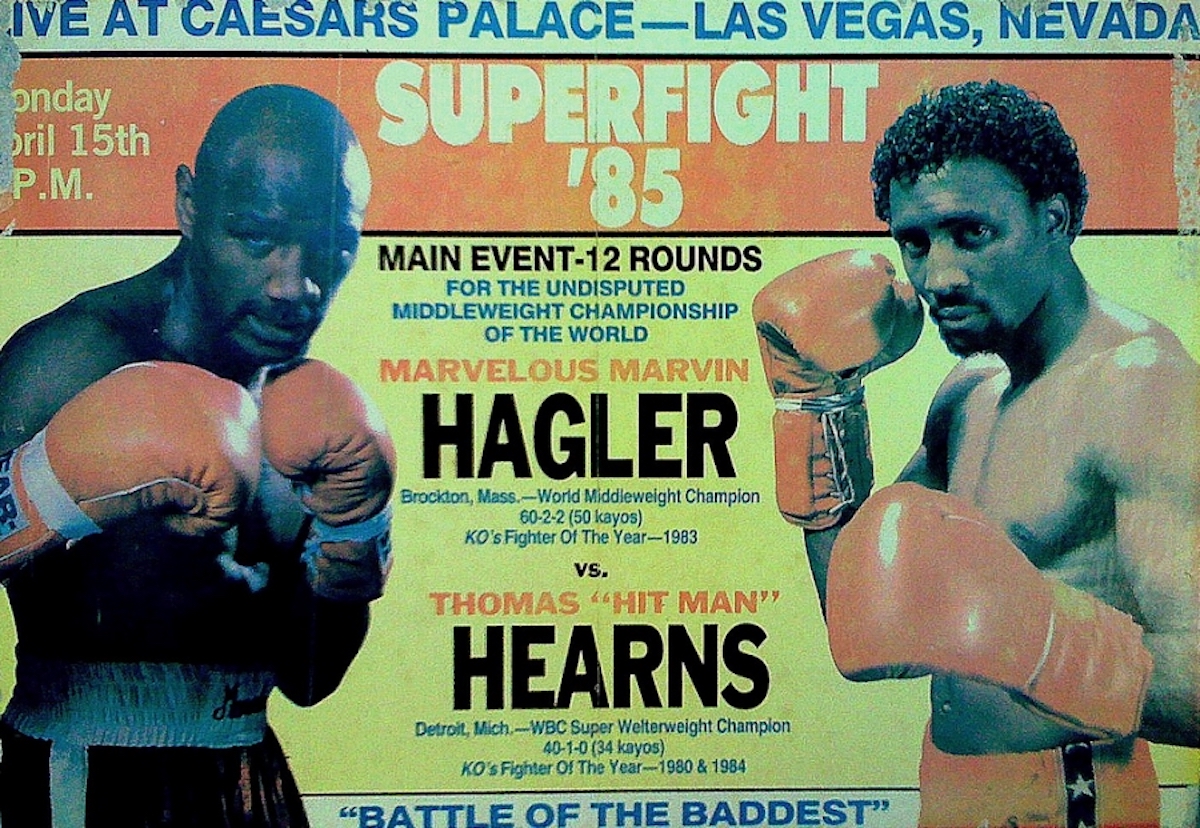