The ICC World Test Championship is played over the course of two years between the nine top-ranked test teams in the world. The 2019-2021 competition featured Australia, Bangladesh, England, New Zealand, Pakistan, South Africa, Sri Lanka and the West Indies.

The two leading teams on points at the end of the two-year cycle, which includes 71 test matches across 27 series where each team plays three home and three away series, compete for the title in the final.

The competition started on 1 August 2019 with the first test of the 2019 Ashes series. Australia retained the Ashes after winning the fourth test by 185 runs.

England levelled the series with a victory in the fifth test, making it the first drawn Ashes series since 1972.

In response to cancelled games as a result of the coronavirus outbreak, to make the competition fairer, the ICC Cricket Committee decided to rank teams based on a percentage of points earned (PCT), which is calculated as points earned/points available.

India finished top of the table with a PCT score of 72.2 and New Zealand placed second with a PCT rating of 70.0. Close behind in third place was Australia on 69.2 and England in fourth place on 61.4.

After Australia’s March 2021 tour of South Africa was cancelled, citing health and safety risks due to coronavirus, New Zealand were guaranteed to be one of the two teams in the final. The outcome of the test series between England and India in February and March would ultimately determine New Zealand’s opposition for the match.

If England were to make it to the final they needed to win three tests against India in a best of four test series.

Australia hoped to see either of the following outcomes; England win no more than two tests against India, the series ended in a draw or India win 1-0. India needed to win the series against England, 4-0, 3-0, 3-1, 2-0 or 2-1 to progress.

As it turned out India beat England 3-1 in the series and advanced to the final to face New Zealand.

Days 1 and 4 of the final between India and New Zealand were washed out because of rain and other days were affected by bad light and rain. A reserve day with a maximum of 98 overs was put in place before the final to account for any delays in play.

After managing to get some cricket in between the rain, day 5 saw New Zealand resume on 101-2, trailing India by 116 runs.

The first wicket of the day came from a full-length delivery to Ross Taylor from Mohammad Shami that was brilliantly caught in the covers by Shubman Gill.

Ishant Sharma claimed the next wicket with a lovely outswinger from around the wicket to the left-hander Henry Nicholls, who edged the ball towards first slip. It was caught by Rohit Sharma, moving from his second slip position in front of first slip to take the catch as New Zealand fell to 134-4.

Mere moments later Mohammad Shami picked up another wicket, producing a perfect delivery that clipped the top of BJ Watling’s off stump, sending him packing for a single run from two deliveries. New Zealand falling to 135-5 and trailing India’s first innings total by 82 runs.

Kyle Jamieson put on a great display of batting scoring 21 runs from 16 balls before being caught in the deep by Jasprit Bumrah off the bowling of Shami. Still trailing by 25 runs New Zealand were 192-7.

The New Zealand captain, Kane Williamson, was finally dismissed after a grinding innings where he made 49 runs from 177 balls. Ishant Sharma produced the delivery that would see Williamson’s demise, caught at second slip by the Indian captain, Virat Kohli.

Neil Wagner went quickly, dismissed for a duck after facing only four deliveries.

Tim Southee scored 30 runs from 45 balls before being bowled by Ravindra Jadeja. Southee would be the final wicket to fall as New Zealand finished their first innings on a total of 249, leading India by 32 runs.

India finished the end of day 5 on 64-2, with Southee taking both wickets, collecting his 600th international wicket in the process.

India swiftly fell to 72-4 succumbing to the bowling of Kyle Jamieson, who took a couple of wickets continuing his form after his five-wicket haul in the first innings.

A further two wickets from Southee, one from Neil Wagner and three from Trent Boult saw India all out for 170 and New Zealand left with 139 to win.

Ravichandran Ashwin took the first wicket of New Zealand’s second innings as they fell to 33-1. Ashwin also captured the wicket of Devon Conway before Taylor joined Williamson at the crease.

Taylor and Williamson proved too good, finishing not out on 47 and 52 respectively, taking New Zealand to victory in a very tightly fought contest between the two teams. 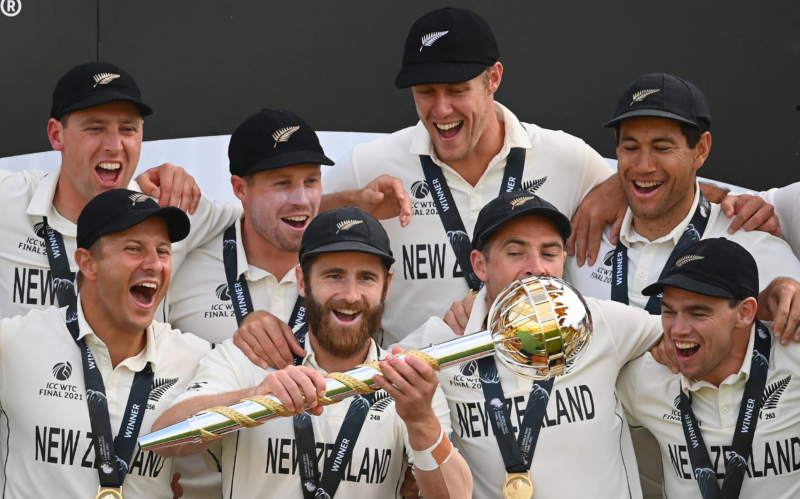