It’s time to celebrate Test cricket which many feel is on its deathbed. A day after West Indies pulled off a sensation one-run victory against Pakistan, India blew away England by 151 runs with less than 10 overs of play left in the second Test at Lord’s.

A number of eyebrows were raised when India left out their premier spinner Ravichandran Ashwin out of the second Test squad. India, who were never known to possess a pace battery, instead went in with four quicks and that did the trick too.

England was in a dominant position before they lost control during a chaotic unbroken ninth-wicket stand of 89 between Shami (56 not out) and Bumrah (34 not out) on the final morning at Lord’s.

England was then bowled out for 120 inside two sessions. Bumrah contributed three wickets and Shami one while the major damage on the Englishmen was done by Mohammed Siraj (4/32).

Senior pacer Ishant Sharma took two wickets. “I think a lot falls on my shoulders as captain. Tactically I could have done things slightly differently,” Root said. “It (Shami and Bumrah partnership) was the pivotal moment of the game, without question, and I don’t think I dealt with that well enough tactically.

It put us in a difficult position,” he said. “It’s just disappointing we didn’t manage to close out that innings how we could have. Probably I just underestimated how challenging and useful the lower order defence can be so as I said a lot falls on my shoulders,” Root said.

Former England skipper Geoffrey Boycott too was not happy with the way things unfolded on the last day. “This Test match has proved two things. Firstly, if you are stupid you do not deserve to win Test matches.

As much as we love Joe Root for his magnificent batting, he cocked up with his tactics. “Secondly, England cannot keep relying on Joe for all their runs. There has to be an improvement from the top three very soon because it is getting beyond a joke,” Boycott wrote in The Telegraph.

England initially looked like they would hold on to a dramatic draw. They had recovered from 90 for 7 to 120 for 7, with only 55 balls left and Jos Buttler and Ollie Robinson looking good. But Jasprit Bumrah, after bowling some rapid overs, produced a magical slower one to fox Robinson and trapped him lbw to break the stubborn stand that had lasted 10.3 overs.

An inspired Siraj, who bowled lung-bursting spells in both innings, then had Buttler caught behind and two balls later castled Jimmy Anderson from the round the wicket to bowl India to a famous win. It was India’s third Test win at Lord’s after 1986 and 2014.

Siraj had earlier dismissed Moeen Ali and Sam Curran off successive balls as Kohli looked for inspiration in his bowling group on a wicket that was flat and slow. While the bowlers made headlines on Day Five it was KL Rahul’s ton and Rohit’s 83 after being inserted on a green pitch that set up India’s 364.

Ajinkya Rahane and Cheteshwar Pujara kept India alive with their century stand on Day Four. On Day Five, the visitors had already taken giant strides towards victory when Bumrah found the edge of in-form England skipper Root for 33.

That wicket came immediately after the tea break, which was taken when Jonny Bairstow was trapped lbw off the last ball before the interval by the consistent Ishant Sharma. Shami too found the perfect line and length as he started the destruction by dismissing Dom Sibley caught behind for another duck off a fantastic leg-cutter.

It was the first time in 141 years that both home openers had been out for a duck in the same innings. Haseeb Hameed was given a life by Rohit Sharma on four at second slip off Shami, but he did not last long enough to profit from that lapse as Ishant trapped him leg before for nine. 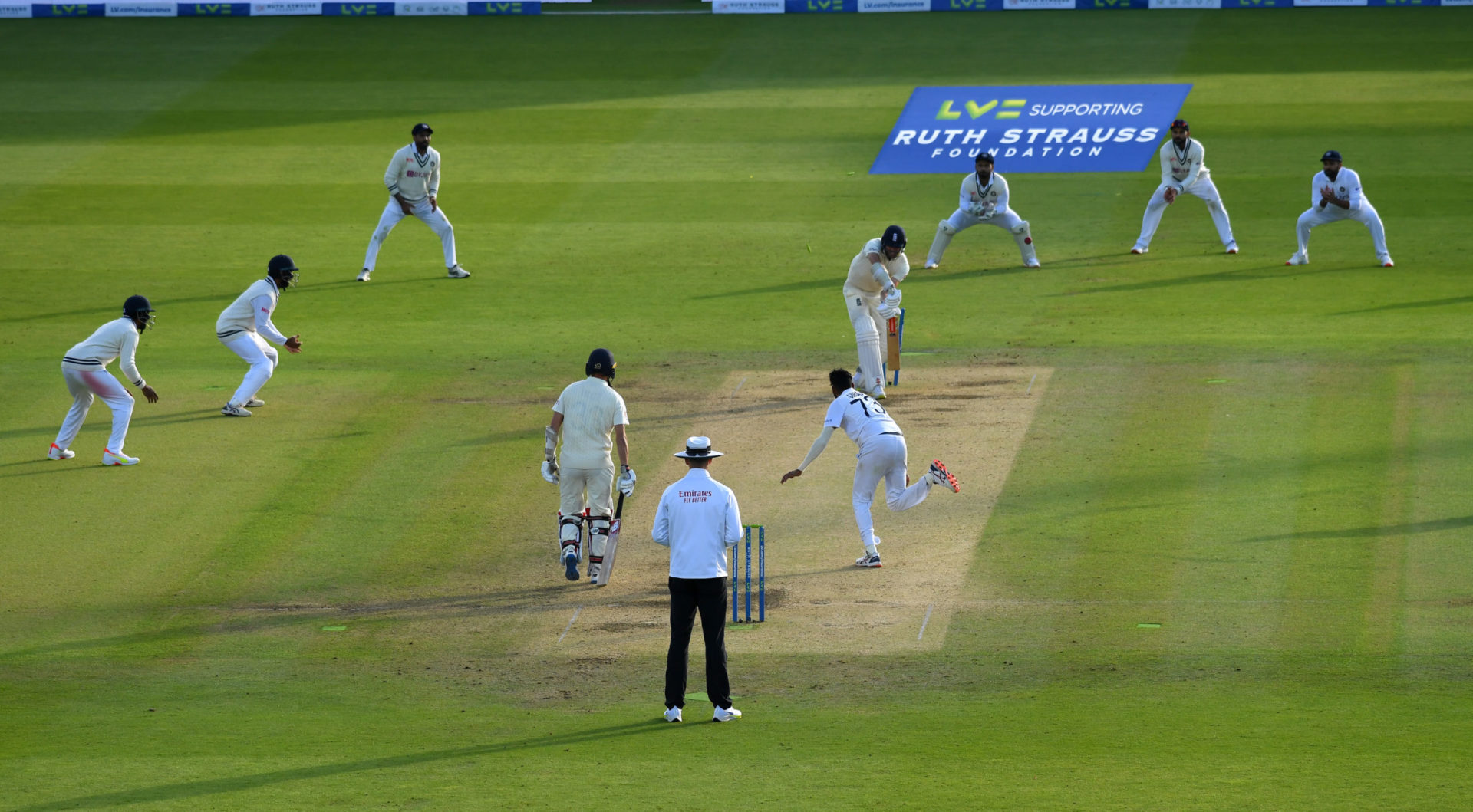