Indian women cricket team’s all rounder and skipper Harmanpreet Kaur is doing wonders in the Australian Women’s Big Bash league. Until now she hasn’t made her selectors repent about the decision of selecting her by performing up to the mark for her team the Sydney Thunders.

In the second match against Melbourne Stars, she performed well with both bat and ball and help her team registered their first WWBL win for the season in Albury on Tuesday. She picked up four wickets for 27 runs and scored 30 runs from 21 deliveries which had two huge sixes and five boundaries to her name.

Kaur is the first Indian to represent India in the Australian Big Bash for women’s. She earlier has led India against Pakistan and it is under her leadership, India won the Asia cup title for this year. Mitali Raj played a fine 77 runs knock in the final to drive Indian women’s team to victory.

Following the footsteps of Indian ODI captain and one of the best match finishers MS Dhoni, she tried to finish the last game in his fashion but failed to do it.

However on Tuesday she managed to finish it off in Dhoni’s style by chasing down a target of 117 runs set by the Melbourne Stars against them. She scored over a total of 16 runs in the 18th over to lead her side to a comfortable and well deserved victory.

In reply to the target of 117 runs, Sydney Thunders scored 121 runs for the loss of 2 wickets at the Lavington Sports club, Albury. 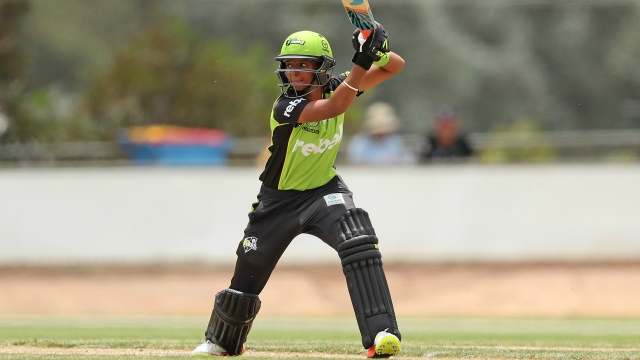