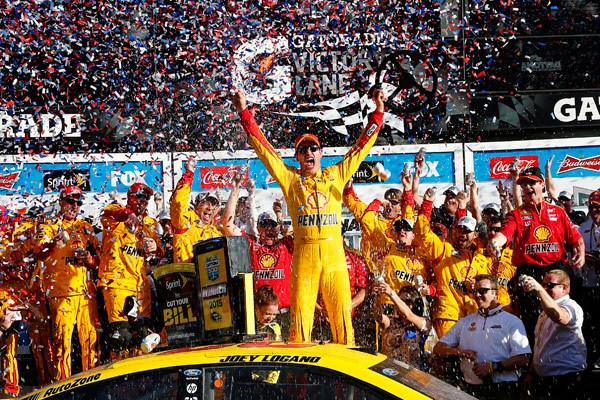 While fans everywhere had high hopes for retiring Jeff Gordon to win NASCAR’s flagship race in his final season, it was Logano who took home the checkered flag in the end, his first time to do so. Kevin Harvick finished second and Dale Earnhardt Jr. finished third.

Joey Logano won his first career Daytona 500 on Sunday at Daytona International Speedway, holding off a host of his competitors over a mesmerizing final stretch of racing.

With three laps to go the red flag came after as Justin Allgaier got tagged by Ty Dillon, ending his race with his car touching the wall.

All that drama came to a pause as officials worked to clear the track.

“I can’t believe it,” Logano said as he got out of his car, still gripping his steering wheel as he celebrated. “This is absolutely amazing. Daytona 500, oh my God. Are you kidding me? I was so nervous the whole race.”

Tony Stewart was among the drivers searching for a first Daytona 500 win to end the day disappointed. In his 17th start at the Daytona 500, “Smoke” was involved in a Lap 41 wreck and finished 42nd.

In his first five Cup seasons, Logano picked up three wins. Last year winning five times and finishing fourth in the championship run.Logano kicks off this year with a victory in NASCAR’s biggest race.

“He’s a different driver really,” said former teammate Denny Hamlin, who finished fourth. “He’s really become one of the elite drivers in our sport. Every single weekend you know you’re going to have beat the 22. That’s something we didn’t say 3 years ago.”

The race was run without Kurt Busch, under NASCAR suspension; and Kyle Busch, injured in Saturday’s Xfinity Series season opener.