It is the first win in the spring race for Johnson. After a late restart, Johnson passed Jamie McMurray and Kevin Harvick , going from third to first in one lap.

Johnson controlled much of the race, leading 128 laps.

He pitted during a late caution and came out with a lesser car. Before that pit stop, Justin Allgaier left debris and oil in Johnson’s pit on the way to the garage after sliding into a wall.

He also won in November at Texas, where all four of his previous wins had been in fall races. The only other driver with more than two-Cup wins at Texas is Carl Edwards, a three-time winner. He finished 10th,

“A great, great race car. We kept plugging away at it all race.

“The off week was good for us, gave us a chance to reboot, relax and get back in the swing of things,” Johnson said.

Busch, who started on the pole, was never a factor after an early burst. He had the lead three times for 45 laps but gradually drifted back into the pack because of handling problems.

Harvick, Logano and Martin Truex Jr., who finished ninth, are the only drivers to finish in the top 10 in all seven races this season. Keselowski got his sixth top 10.

Larson returned for Texas after he was sidelined for the March 29 race at Martinsville as he underwent examination because of a fainting spell during an autograph session the previous day.

Regan Smith, filled-in for Larson, driving the No. 42 at Martinsville.

Yeah, definitely when you are young you think you are bulletproof, and that’s just one little instance that shows you that you aren’t,” Larson said Friday upon resuming his NASCAR Sprint Cup Series career at Texas Motor Speedway.

“You’ve got to take care of yourself as you get older; (I’m) definitely going to try and do a better job of that.” 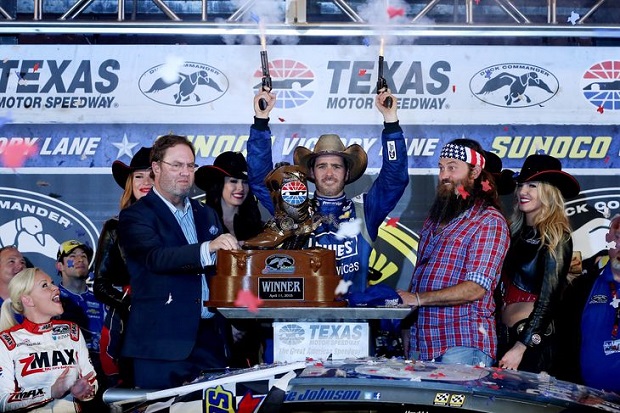