Kyle Busch did it again this Sunday and is moving closer to landing a spot in the Chase.Busch was racing behind leaders Kevin Harvick and Keselowski as multiple drivers were radioing to NASCAR officials that there was oil on the track and that a caution flag needed to be thrown.

However nothing was done about it for a few laps and Busch split Keselowski and Harvick as the three were passing Landon Cassill into turn one on lap 251. Busch was the leader when the race restarted. Jumping ahead on  Keselowski  at the restart and widening the gap a lead over two seconds before Keselowski made a late surge but it was to little to late as a last lap caution stopped his charge right in its tracks.

Busch needs only to finish in the top 30 in the regular-season standings to earn a spot in the 16-driver Chase for the Sprint Cup field. Busch won races at Sonoma Raceway and last week at Kentucky and is 33rd in the standings. Busch had one of his best performances in his comeback, returning from one lap down. Busch has gained 70 points on the 30th spot over the past two races and is not only a threat to qualify for the Chase but to win it all for Joe Gibbs Racing should he crack the field.

“Five laps, I just drove as hard as I could off pit road. I knew I needed to get those guys. They were telling me [David Gilliland] was the lucky dog [first car one lap down] spot and once I got there I was like ‘OK, what else do I have to do to get back on the lead lap?'”

“I figured it was [Harvick] still, and it was and [Harvick] and [Keselowski] were really the class of the field I felt like today. Our car was a close third but … on the long runs our front end would die and just couldn’t turn.”

Clint Bowyer, winless and outside the Chase for the Sprint Cup points cutoff, had another frustrating race after brushing the wall and collecting right rear damage that  ruined his day.Alex Bowman’s  No. 7 car burst into flames when a tire combusted, creating a long caution on Lap 96. 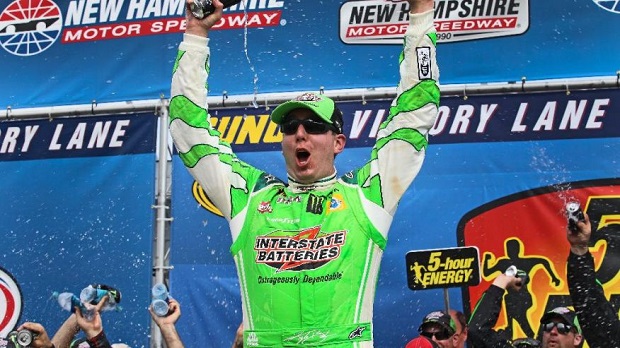