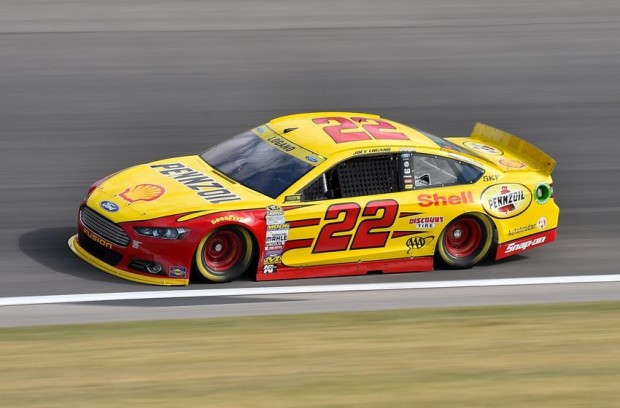 Joey Logano took a second straight NASCAR Sprint Cup Chase race win at Kansas Motor Speedway in controversial style, after.Logano had closed in on Kenseth quite quickly once the pair had overtaken Jimmie Johnson off a late restart.As the two came up on lapped traffic exiting turn 4 with 5 laps to go,

Kenseth’s momentum was all but gone and Logano took his shot.Kenseth in serious need of a victory to advance to the next round, attempted blocking Logano twice with less than 20 laps to go. But when the two of them hit lapped traffic, Logano had enough,sending him for a spin entering Turn 1. Logano pulled away from fellow Chase contender Denny Hamlin on the restart and didn’t look back.

“It’s just good hard racing,” Logano said of his battle with Kenseth. “He raced me hard, so I raced him hard back. … The fact that we’re the only team that can relax now (with Talladega looming) is going to pay big dividends going into Martinsville. To make a lot of these guys nervous going into Talladega is part of the strategy.”

Kenseth finished 14th. He is 31 points behind the point cutoff to advance into the Chase’s third round. He led a race-high 153 of 269 laps.

“He picked the rear tires off the ground and wrecked me,” Kenseth said in a post-race interview. “There’s no debate about that one.”

Kevin Harvick was dealt a blow when he tried to leave his pit on a green-flag stop — with his gas can stuck in the car. Harvick was given a pit pass-through penalty which knocked him off the lead lap. He also found himself with a broken gear-shift handle to boot.Also Dale Earnhardt Jr.’s championship hopes were damaged on lap 165 when he was forced to the pits because of a loose wheel. He  lost a lap.

has just registered!
7 minutes ago