Nathan Lyon took 4 wickets as Australia would defeat England by 9 wickets in the opening test of the 2021/22 Ashes series.

Resuming on 220/2, the visitors would add three to the overnight score with Dawid Malan caught by Marnus Labuschagne close in on the offside off the bowling of Nathan Lyon (pictured below), the spinner getting his 400th test wicket with this dismissal, for 82 before Joe Root would edge through to wicketkeeper Alex Carey off the bowling of Cameron Green for 89. Ollie Pope would follow quickly, caught at slip by Steve Smith off the bowling of Lyon for 4 before Ben Stokes would be caught by Green off the bowling of Pat Cummins for 14.

Jos Buttler would be the seventh man out, knicking the ball through to Carey off the bowling of Josh Hazlewood for 23 before Lyon would get his third wicket of the morning with Ollie Robinson lobbing the ball up to Travis Head after getting 8 runs. Mark Wood would be bowled by Lyon for 6 before Chris Woakes would be the final man to be dismissed, caught by Carey off the bowling of Green for 16 – Jack Leach finishing 0 not out.

Requiring just 20 to win, Marcus Harris and debutant Carey opened the innings after a rib injury to David Warner (which occurred whilst batting in the first innings resulting in him not fielding for England’s second innings) as the wicketkeeper edged behind to Buttler off the bowling of Robinson for 9 with Harris and Labuschagne finishing 9 and 0 not out respectively.

Australia A vs England Lions – Day 2

Resuming on 158/1, the hosts moved to 175 before Matt Renshaw would be caught by Alex Lees off the bowling of Dom Bess for 43 with captain Nic Maddinson caught by Rob Yates off the same bowler for 71 off 36 balls. Usman Khawaja would be the final wicket to fall, caught behind by Ben Foakes off the bowling of Yates, for 5 with opener Bryce Street (119) and Mitchell Marsh (pictured below, 60 off 27 balls) not out when the Aussie declaration came at 349/4.

Requiring a target of 460 to win, England would lose Lees early as he was bowled by Scott Boland for 1 before Yates would be caught by Renshaw off the bowling of Michael Neser for 41. Tom Abell would be the final wicket to fall, caught by Khawaja off the bowling of Mark Steketee without scoring with James Bracey (pictured below) and Josh Bohannon finishing 57 and 28 not out respectively. 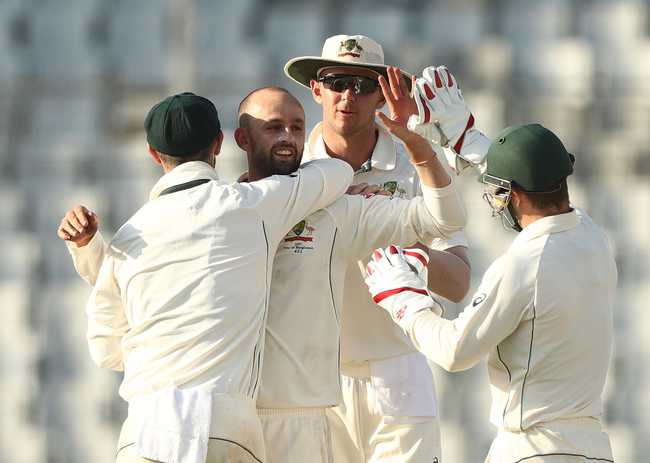